This section of the report focuses on cellphone usage in group settings and social gatherings — encounters where people’s use of cellphones might change the basic dynamic of the group.

In general, Americans feel that when people use their cellphones in social gatherings it hurts the conversation more often than it helps

In the main, Americans think that when people focus on their phones instead of their companions, it hurts the group in which they are participating. This Pew Research Center survey attempted to measure feelings about this complicated issue from both directions — respondents were asked first about whether cellphone use might hurt social gatherings, and then whether cell phone use might help gatherings. It was possible for them to answer “yes” to both questions, or “no” to both.

The social balance sheet they constructed looks like this:

Inevitably, there is variance in views among the young and the old, as the nearby chart illustrates.

Despite the consensus that cellphone use harms group interactions, most cellphone owners think their phone use does not necessarily take their attention away from the group

In many cases, people use their phones in the midst of social settings to connect to another person — so they are being social in a way, even if they are not being social with those nearby. Some 41% of cell owners indicate that at least some of their cellphone usage in group social gatherings is for the purpose of connecting to others: 14% of cellphone owners say that “a lot” of their phone use in group social settings is to get in touch or connect with someone else, while 27% say that “some” of their phone use is for this purpose. Meanwhile, a majority of cellphone users say that only a little (36%) or none (23%) of their cell use in social settings is to get in touch or connect with others. 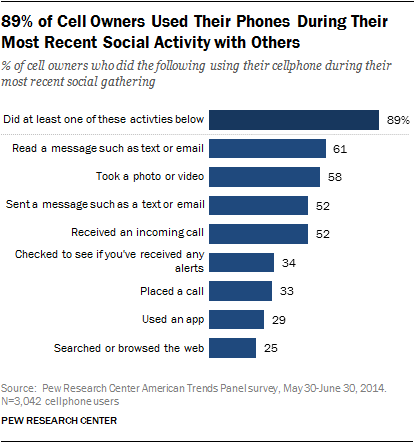 In spite of their misgivings about the impact of mobile devices on group interactions, many cell owners pick up their own mobile devices when they are at social gatherings

Despite their general concerns about the impact of cellphones in social settings, the vast majority of cell owners say they themselves use their phones during their own social gatherings. However, they often say they use their phones in these settings in order to do things that connect to the group.

In this survey, cellphone owners were asked to think about the most recent time they were at a social gathering and to indicate whether they used their cellphone in various ways during that gathering. Overall, 89% of cellphone owners ages 18 and older say that they used their phone in at least one of the ways we asked about. A majority of cell owners indicated that they used their phone to read or send messages, take photos or videos, or receive an incoming call during their most recent social gathering. Fewer used their phones to disengage entirely from the group, such as checking to see if they had any alerts, placing a call, using an app, or searching or browsing the web. 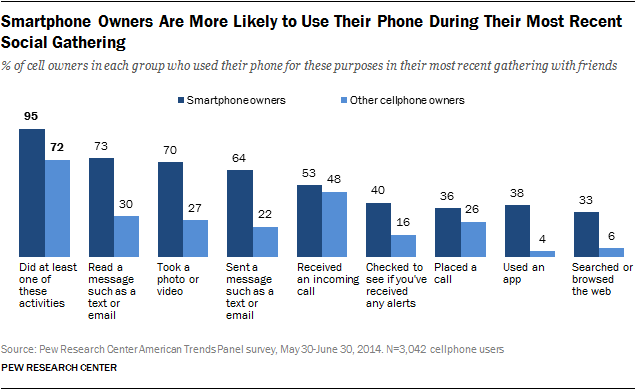 Moreover, younger cellphone owners were far more likely to have used their phones in each of these ways at a recent social gathering than older cell users. Fully 98% of young adults used their phone for at least one of these reasons during a recent gathering, compared with 69% of cell owners 65 and older.

Cellphone owners ages 18 to 29 are more likely to have turned to their screen during a recent social gathering for some of the individual activities we queried, including reading messages, sending messages, using apps, looking for alerts and browsing the web.

There are also some differences between men and women. At their most recent social gathering, among cellphone owners, men were more likely than women to:

In a follow-up question, we asked those who said they had recently used their phone at a social gathering the reasons for their cellphone use. Among the reasons we asked about, the most common responses relate to activities that add to the immediate gathering, rather than retreat from it. A relatively large number of those who used their phone during a recent social gathering did so to: 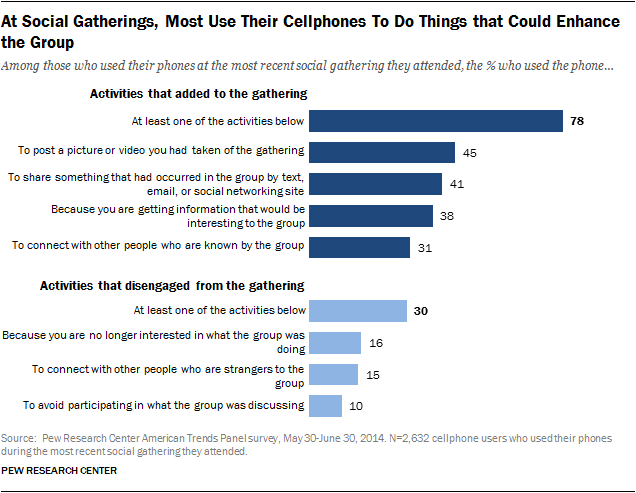 Overall, 78% cited at least one of these four “group-contributing” reasons.

Among cell phone owners who recently used their phone at a social gathering, younger users are more likely than older users to say they had used their phones for each of the reasons we asked about. These differences are especially pronounced when it comes to using one’s cellphone for getting information that would be interesting for the group and connecting with people known by the group, but also for all three of the activities that might distance people from the group. 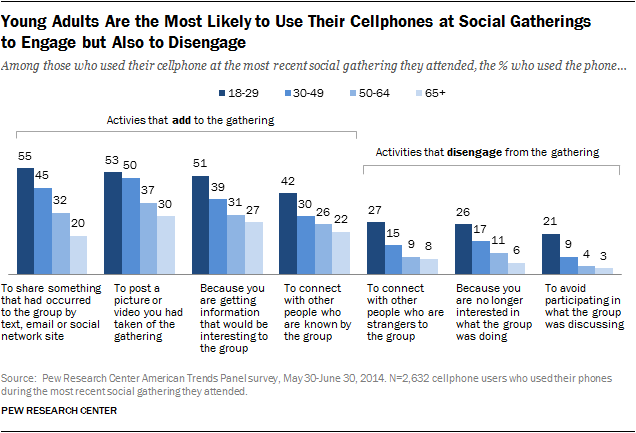 What others did at a recent social gathering

A separate question asked all respondents (not just cellphone users) about others’ cellphone use at a recent group event. In response, 86% of adults said that they remember someone else using their phone at the most recent social gathering they attended.

Some 90% of the cell users who said they used their phone in a recent social gathering also said that someone else at that the gathering also used their cellphone. By comparison, just 68% of cellphone users who did not use their cell in a recent social gathering said someone else used a phone at that gathering. This raises some questions as to the role of group social norms in setting standards of behavior around cellphone use: Those who use their phones in groups may also be more likely to be in groups where phone use is more common and therefore have higher expectations that people’s cell use will be part of the gathering’s environment.

A similar dynamic applies to the age of cell owners. Those under age 50 (91%) are more likely than older adults to say someone else used a phone at their most recent social gathering, particularly those ages 65 and older (78%). Smartphone users also more likely than regular cell users to say someone else used a phone, as are people living in higher income households or those who have higher levels of education. There are no significant differences by gender or by race or ethnicity.

Next: About This Report
← Prev Page
Page1Page2Page3Page4You are reading page5Page6Page7
Next Page →

Dating and Relationships in the Digital Age
Social Media and the ‘Spiral of Silence’
53% of Americans Say the Internet Has Been Essential During the COVID-19 Outbreak
The Challenges of Contact Tracing as U.S. Battles COVID-19
Online Shopping and E-Commerce
Defining generations: Where Millennials end and Generation Z begins
Quiz: Are you a Core Conservative? A Solid Liberal? Or somewhere in between?
Teens, Social Media & Technology
How the Coronavirus Outbreak Has – and Hasn’t – Changed the Way Americans Work
What We Know About Gen Z So Far