For most Americans, the cellphone is no longer an auxiliary or supplementary device to their landline telephone. Roughly nine-in-ten Americans own a cellphone and nearly two-thirds own a smartphone. Recent research from the U.S. government shows that almost 43% of adults live in a cellphone-only household – that is, without a landline. As mobile devices become more common and essential, Americans are creating and navigating new norms around these gadgets’ use in social gatherings and public spaces.

Cellphones can be a source of instant connection — and constant distraction. Many are concerned that people’s attention to mobile devices in public and in social spaces prompts them to live “Alone Together,” as the title of MIT professor Sherry Turkle’s book puts it. Such a life, in her view, is socially stunted and damaging to communities. On the other hand, researcher Keith Hampton, who has studied how people use mobile devices in public spaces, has found evidence that cellphones are not encroaching on group social interactions, but rather are serving to fill time during periods of waiting and other interstitial moments.

These are intriguing and important issues. Norms of etiquette are not just small-scale social niceties. They affect fundamental human interactions and the character of public spaces. That is why Pew Research Center conducted a survey on the subject.

The poll found that Americans have varied and nuanced views on the new contours of civil behavior. They are sorting through the neo-etiquette of mobile life — sometimes attesting that constant connectivity brings social payoffs and other times lamenting what screen distractions do to social gatherings; sometimes appreciating the instantaneous availability of people and information and other times feeling aggrieved when others want to take advantage of that; sometimes declaring the importance of being present with others and other times glancing at screens while in-person conversation swirls around them.

This chapter starts to explore these cross-pressures with a look at the basics of “always-on” connectivity.

Americans’ cellphones are generally with them and rarely turned off 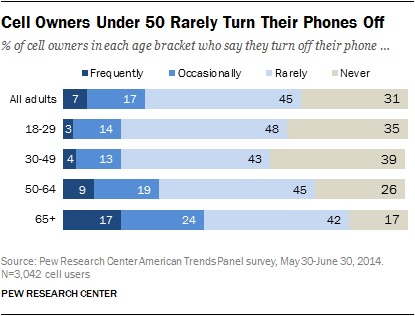 In addition, most smartphone owners take advantage of other features of their device, with 59% reporting they use apps on their phones at least several times a day and 27% saying they use them “continuously.”

Web browsing is somewhat less intense in usage: most smartphone owners browse the web on their phones at least several times a day, although only 14% use their phones’ browser continuously (roughly half the proportion who continuously use apps).

Next: Chapter 2: Phone Use in Public Areas
← Prev Page
Page1You are reading page2Page3Page4Page5Page6Page7
Next Page →

Americans’ Views on Mobile Etiquette
Chapter 1: Always on Connectivity
Chapter 2: Phone Use in Public Areas Chapter 3: When it is acceptable — or not — to use cellphones in public spaces Chapter 4: Phone use in social gatherings About This Report Methods