Home Research Topics Internet & Technology Emerging Technology Future of the Internet The Web at 25 in the U.S.

The chart below shows the varying levels of enthusiasm for different technologies among their users. 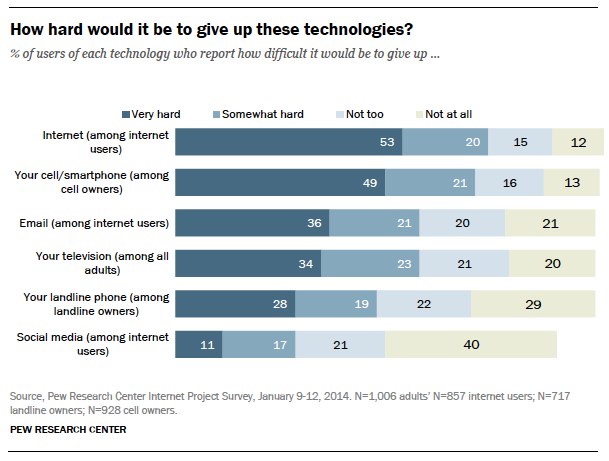 In addition to this enthusiasm, a notable share of Americans say the internet is essential to them. Among those internet users who said it would be very hard to give up net access, most (61% of this group) said being online was essential for job-related or other reasons. Translated to the whole population, about four in ten adults (39%) feel they absolutely need to have internet access. Among those most deeply tied to the internet, about half as many (some 30%) said it would be hard to give up access because they simply enjoy being online. And 7% said both reasons applied to them—it is essential and enjoyable in equal measure.

There is considerable debate about whether people’s use of the internet has enriched their relationships or not and whether the online environment is friendly or menacing. We asked questions about that and found that for the American public, the balance sheet is considerably more positive than negative. 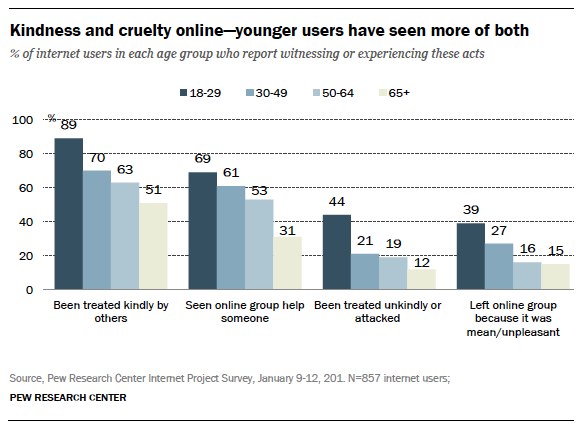 Online women are more likely than online men to have encountered some of these things: Women who use the internet are more likely than men to have been treated kindly (74% vs. 66%); to have seen an online group come together to help someone or a community solve a problem (63% vs. 50%); and to have left an online group because the interaction became too heated or members were unpleasant to each other (28% vs. 22%). There were not statistically significant differences between online women and men when it comes to being treated unkindly or attacked by someone online.

Asked for a broad perspective about the civility or incivility they have either witnessed or encountered during all of their online tenure, 76% of internet users said that the people they witnessed or encountered online were mostly kind and 13% said people were mostly unkind. Some 6% said both kindness and unkindness were there in equal measure. Interestingly, the oldest internet users (ages 65+) were the most likely to say people were mostly kind—85% of them said so.

The impact of online communication on relationships

There is considerable discussion about whether people’s use of the internet has made their relationships richer or more superficial. 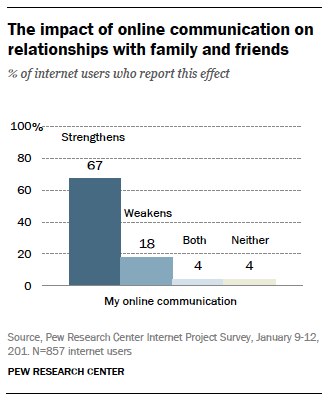 On this 25th anniversary of the web survey, we also asked internet users for their own summary judgment and by a more than 3-t0-1 margin they say they think their online communication has generally made them socially richer: 67% of internet users say their online communication with family and friends has generally strengthened those relationships, while 18% say it generally weakens those relationships.

Interestingly enough, there are no significant demographic differences tied to users’ feelings about the impact of online communication on relationships.

Equal proportions of online men and women, young and old, rich and poor, highly educated and less-well educated, and veterans and relative newbies say by 3-to-1 or better that online communication is a relationship enhancer, rather than a relationship detractor.

The overall verdict: The internet has been a plus for society and an especially good thing for individual users 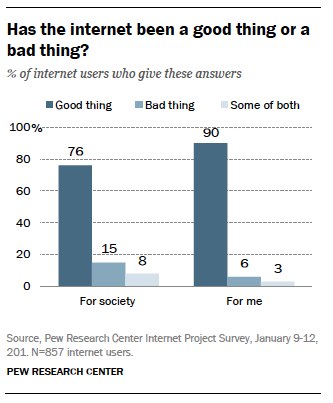 This sweeping judgment came across the board among different demographic groups of internet users.

Moving across the demographic spectrum, this overwhelmingly positive view applies to all major groups.