This report is based on the findings of a survey on Americans’ use of the Internet. The results in this report are based on data from telephone interviews conducted by Princeton Survey Research Associates International from April 17 to May 19, 2013, among a sample of 2,252 adults, age 18 and older.  Telephone interviews were conducted in English and Spanish by landline (1,125) and cell phone (1,127, including 571 without a landline phone). For results based on the total sample, one can say with 95% confidence that the error attributable to sampling is plus or minus 2.3 percentage points.  For results based on Internet users11 (n=1,895), the margin of sampling error is plus or minus 2.5 percentage points.  In addition to sampling error, question wording and practical difficulties in conducting telephone surveys may introduce some error or bias into the findings of opinion polls.

Weighting is generally used in survey analysis to compensate for sample designs and patterns of non-response that might bias results. A two-stage weighting procedure was used to weight this dual-frame sample. The first-stage corrected for different probabilities of selection associated with the number of adults in each household and each respondent’s telephone usage patterns.12 This weighting also adjusts for the overlapping landline and cell sample frames and the relative sizes of each frame and each sample. 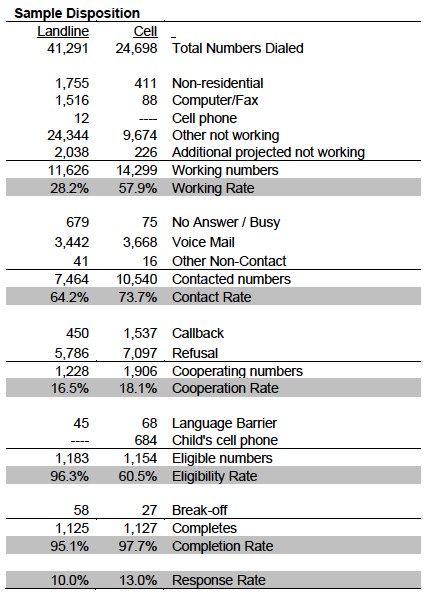