An array of woes has struck some internet users when personal information of theirs was compromised or some of their online activities put them in conflict with others:

In addition to those instances when personal information and personal identity have been at the center of a problem, 13% of internet users report they have experienced trouble in a relationship between them and a family member or a friend because of something they posted. And 1% say they have lost a job opportunity or educational opportunity because of something they posted online or someone posted about them online.

Online younger adults—those ages 18-29—are the most likely to have experienced some of these troubles, including have an email or social media account taken over, being stalked or harassed online, suffering reputational damage, or being in physical danger based on online events. 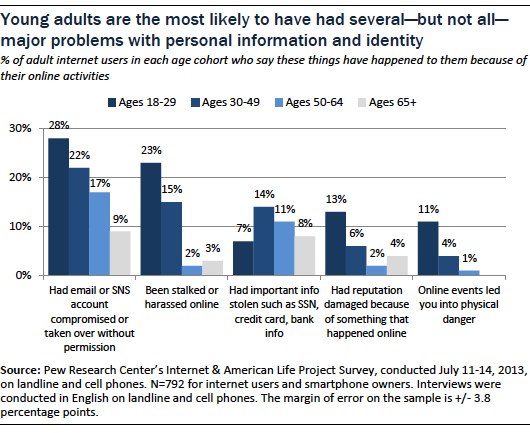 In addition to the age differences when it comes to these problems, there are also times when poorer internet users are among the most likely to be victimized. For instance, the internet users who live in households earning less than $30,000 are particularly likely to have suffered a problem from their online activities: 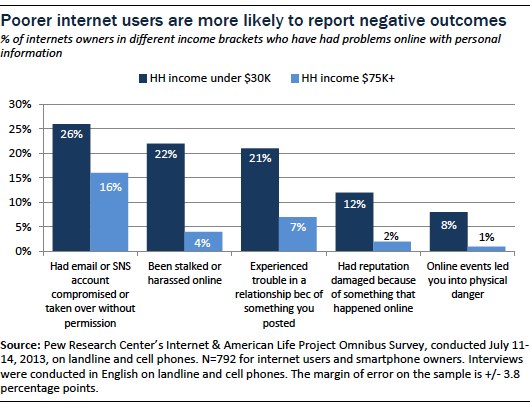 Next: Methods
← Prev Page
Page1Page2Page3Page4Page5You are reading page6Page7
Next Page →

Anonymity, Privacy, and Security Online
86% of Internet Users Want to Prohibit Online Companies From Disclosing Their Personal Information Without Permission
Public Perceptions of Privacy and Security in the Post-Snowden Era
Testimony to the National Committee on Vital and Health Statistics
Trust and Privacy Online
Defining generations: Where Millennials end and Generation Z begins
Growing Share of Americans Say They Plan To Get a COVID-19 Vaccine – or Already Have
Quiz: Are you a Core Conservative? A Solid Liberal? Or somewhere in between?
Most Americans Support Tough Stance Toward China on Human Rights, Economic Issues
In their own words: What Americans think about China