Internet users are more worried than they were in the past about the amount of information that is available about them online. Half (50%) of internet users say they are worried, up from 33% who said that in September 2009. In late 2006, the figure stood at 40%.

There is consistent evidence that the level of concern is growing. It has increased among all groups, and is especially pronounced among internet users ages 65 and older and those living in households earning less than $30,000.

The personal information that users know is available

We asked internet users about 11 kinds of personal information and whether that information was available online “for others to see.” We made clear that it did not matter if they posted or revealed the information or if someone else did. The average user reported that they knew at least four of these details about them was available on the internet. Here is a breakdown of their answers:

In several of the categories of personal information, young adults are more likely to have those details online, as the chart below shows. Still, there several items on the list where this cohort did not stand out. When it comes to whether users’ email addresses are available online, there were no major noteworthy differences among those below the age of 65.

Finally, younger adults were no more or less likely than their elders to say that their political affiliations were available online. 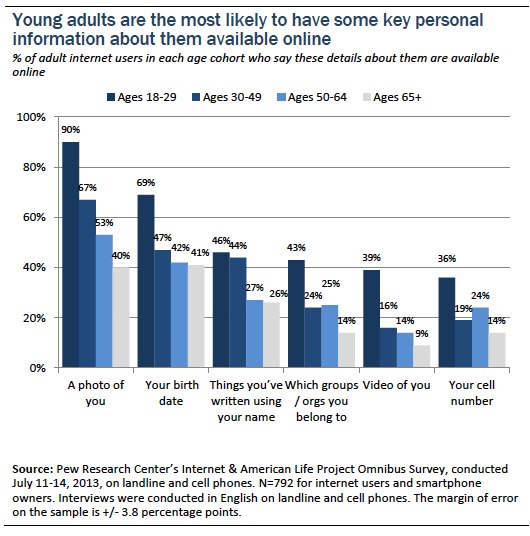 Interestingly, there are not noteworthy differences in answers to this question associated with political or partisan points of view. Tea Party supporters, conservative Republicans, self-described moderates, and liberal Democrats are not statistically significantly different in their answers.

Not surprisingly those who say they are worried about the amount of information about them online are more likely to say that current laws are not good enough.

Next: Part 3: Who Internet Users are Trying to Avoid; the Information They Want to Protect
← Prev Page
Page1Page2You are reading page3Page4Page5Page6Page7
Next Page →

Anonymity, Privacy, and Security Online Part 1: The Quest for Anonymity Online
Part 2: Concerns About Personal Information Online
Part 3: Who Internet Users are Trying to Avoid; the Information They Want to Protect Part 4: How Users Feel About the Sensitivity of Certain Kinds of Data Part 5: Online Identity Theft, Security Issues, and Reputational Damage Methods