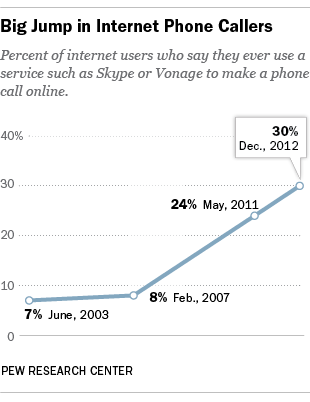 As with many online activities, the young and the upscale were more likely than other internet users to have made online phone calls. The Project survey conducted between November 14-December 9, 2012 found that 42% of those with college or graduate degrees have placed online phone calls; 37% of those living in households earning $75,000 or more had done so; and 40% of those ages 18-29 had done so.

This is one of many ways that the digital age is changing what it means to make a phone call and the ways in which people make calls. You can read more about the Internet Project’s research on how people use their mobile phones here.