The 2012 Teens and Privacy Management Survey sponsored by the Pew Research Center’s Internet and American Life Project obtained telephone interviews with a nationally representative sample of 802 teens aged 12 to 17 years-old and their parents living in the United States. The survey was conducted by Princeton Survey Research Associates International. The interviews were done in English and Spanish by Princeton Data Source, LLC from July 26 to September 30, 2012. Statistical results are weighted to correct known demographic discrepancies.  The margin of sampling error for the complete set of weighted data is ±4.5 percentage points.

A combination of landline and cellular random digit dial (RDD) samples was used to represent all teens and their parents in the United States who have access to either a landline or cellular telephone. Both samples were provided by Survey Sampling International, LLC (SSI) according to PSRAI specifications.

Both samples were disproportionately stratified to increase the incidence of African Americans and Latinos. The same stratification scheme was used for both sample frames and was based on the estimated incidence of minority groups at the county level. All counties in the United States were divided into ten strata based on the estimated proportion of African American and Latino populations. Strata with higher minority densities were oversampled relative to strata with lower densities. Phone numbers were drawn with equal probabilities within strata. The disproportionate sample design was accounted for in the weighting.

To supplement the fresh RDD sample, interviews were also completed among a sample of parents who recently participated in the PSRAI Weekly Omnibus survey. Table 1 shows a breakdown of the number of interviews completed by sample segment. 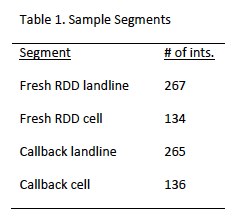 Contact procedures were slightly different for the landline and cell samples. For the landline samples, interviewers first determined if the household had any 12 to 17 year-old residents. Households with no teens were screened-out as ineligible. In eligible households, interviewers first conducted a short parent interview with either the father/male guardian or mother/female guardian. The short parent interview asked some basic household demographic questions as well as questions about a particular teen in the household (selected at random if more than one teen lived in the house.)

Weighting is generally used in survey analysis to compensate for patterns of nonresponse and disproportionate sample designs that might bias survey estimates. This sample was weighted in three stages. The first stage of weighting corrected for the disproportionate RDD sample designs. For each stratum the variable WT1 was computed as the ratio of the size of the sample frame in the stratum divided by the amount of sample ordered in the stratum. For the callback samples, the weights from the original surveys was brought in and used as WT1.

The interviewed sample was raked to match national parameters for both parent and child demographics. The parent demographics used for weighting were: sex; age; education; race; Hispanic origin; number of 12-17 year olds in household; number of adults in the household; phone use and region (U.S. Census definitions). The child demographics used for weighting were gender and age. The parameters came from a special analysis of the Census Bureau’s 2011 Annual Social and Economic Supplement (ASEC) that included all households in the United States. The phone use parameter was derived from recent PSRAI survey data.

Raking was accomplished using Sample Balancing, a special iterative sample weighting program that simultaneously balances the distributions of all variables using a statistical technique called the Deming Algorithm. Weights were trimmed to prevent individual interviews from having too much influence on the final results. The use of these weights in statistical analysis ensures that the demographic characteristics of the sample closely approximate the demographic characteristics of the national population. Table 2 compares weighted and unweighted sample distributions to population parameters. 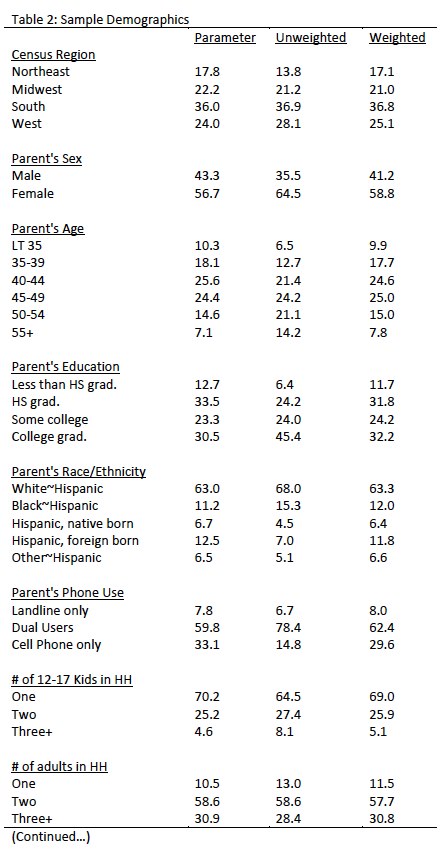 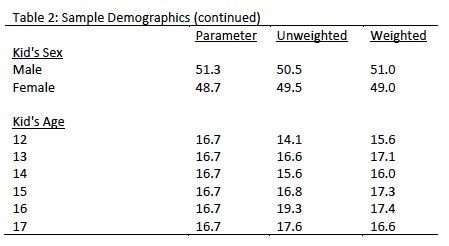 Post-data collection statistical adjustments require analysis procedures that reflect departures from simple random sampling. PSRAI calculates the effects of these design features so that an appropriate adjustment can be incorporated into tests of statistical significance when using these data. The so-called “design effect” or deff represents the loss in statistical efficiency that results from systematic non-response. The total sample design effect for this survey is 1.69.

The survey’s margin of error is the largest 95% confidence interval for any estimated proportion based on the total sample — the one around 50%.  For example, the margin of error for the entire sample is ±4.5 percentage points. This means that in 95 out every 100 samples drawn using the same methodology, estimated proportions based on the entire sample will be no more than 4.5 percentage points away from their true values in the population.  It is important to remember that sampling fluctuations are only one possible source of error in a survey estimate. Other sources, such as respondent selection bias, questionnaire wording and reporting inaccuracy, may contribute additional error of greater or lesser magnitude.

Table 3 reports the disposition of all sampled callback telephone numbers ever dialed. The response rate is calculated according to American Association of Public Opinion Research standards. 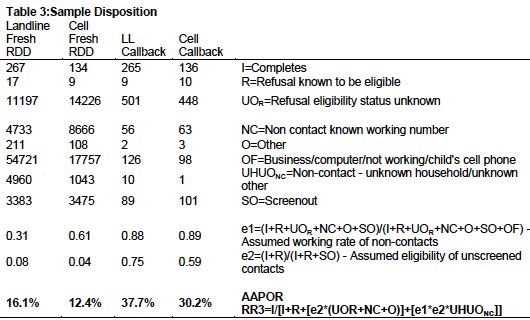 Internet ActivitiesMobileSocial NetworkingTechnology AdoptionTeens and TechnologyTeens and Youth
So far, Trump has granted clemency less frequently than any president in modern history
Biden Begins Presidency With Positive Ratings; Trump Departs With Lowest-Ever Job Mark
Almost all U.S. presidents, including Trump, have been Christians
How we know the drop in Trump’s approval rating in January reflected a real shift in public opinion
What Biden and Trump voters say they want the other candidate’s supporters to know about them