Seven in ten U.S. adults track a health indicator for themselves or for a loved one

Keeping notes on one’s health has been shown to be a tool for improving it,1 but up until now there has been no measure of how many people engage in this activity.

A national telephone survey conducted by the Pew Research Center’s Internet & American Life Project finds that 69% of U.S. adults keep track of at least one health indicator such as weight, diet, exercise routine, or symptom. 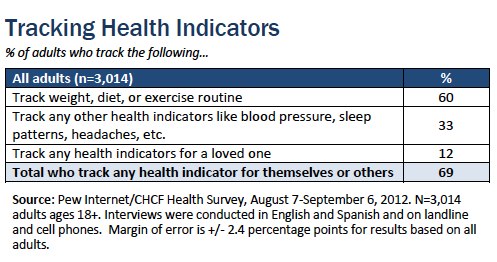 We will refer to this group as “trackers” throughout this report.

The Pew Internet survey shows that people living with one or more chronic conditions are no more likely than other U.S. adults to track their weight, diet, or exercise routine. They are, however, significantly more likely to track other health indicators or symptoms and this likelihood increases among those living with more than one condition:

Nearly half (45%) of U.S. adults are dealing with at least one chronic condition. Of those who are living with two or more conditions, 78% have high blood pressure and 45% have diabetes — two health conditions more effectively managed when people track their own data.2

Tracking on paper, spreadsheet, mobile device — or just “in their heads”

Since some people track more than one aspect of their health we asked respondents to think about the health indicator they pay the most attention to, either for themselves or someone else, and to tell us how they track it:

(Total may exceed 100% due to multiple responses.)

There were significant differences between the 50% of trackers who record their notes in some organized way, such as on paper or using technology, and the 44% of trackers who keep track solely “in their heads.” We will note the differences in each section that follows.

Trackers living with multiple chronic conditions are more likely to be methodical about collecting their own health data:

Not surprisingly, trackers who do not take formal notes are less likely than others to say they update their records on a regular basis or to share their progress with someone else.

Trackers with two or more conditions are more likely than other groups to say they keep track on a regular basis (rather than just when something comes up) and they are more likely to share their notes with someone else:

Why do people go to the trouble of tracking health data, for themselves or for someone they care for? Some say they get results:

In all, 63% of trackers agree with at least one of those statements of impact.

Trackers with chronic conditions are significantly more likely to report that these activities have had an impact on their health: 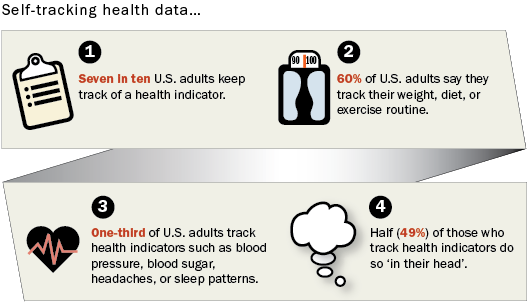 The results reported here come from a nationwide survey of 3,014 adults living in the United States. Telephone interviews were conducted by landline (1,808) and cell phone (1,206, including 624 without a landline phone). The survey was conducted by Princeton Survey Research Associates International. Interviews were done in English and Spanish by Princeton Data Source from August 7 to September 6, 2012. Statistical results are weighted to correct known demographic discrepancies. The margin of sampling error for the complete set of weighted data is ±2.4 percentage points.

The Pew Internet & American Life Project is an initiative of the Pew Research Center, a nonprofit “fact tank” that provides information on the issues, attitudes and trends shaping America and the world. The Project is nonpartisan and takes no position on policy issues. Support for the Project is provided by the Pew Charitable Trusts.

Support for this study was provided by the California HealthCare Foundation, an independent philanthropy committed to improving the way health care is delivered and financed in California.

Next: Main Report
← Prev Page
You are reading page1Page2Page3Page4
Next Page →