Among all adults, the most closely followed local topics are weather, breaking news, politics and crime, all followed by a solid majority of two thirds or more.  Slightly less popular topics but still with a fairly good following of about half or more are arts and culture, local businesses, schools and education, community and neighborhood events, restaurants, taxes and traffic.  Fewer survey respondents follow local news about housing, local government activity, job openings, social services, or zoning.  Roughly four in 10 adults or fewer follow these local topics.

Local news enthusiasts and non-enthusiasts both follow a wide variety of local topics.  In fact, it is somewhat surprising that adults who say they follow local news closely most of the time are no more likely than those who do not to follow four of the 16 local topics asked about, including local businesses other than restaurants, community events, housing and real estate, and social services.  And even among those topics which local news enthusiasts are significantly more likely to follow, in many cases the difference between the two groups is 12 percentage points or less (weather, local politics, arts and culture, local restaurants, taxes, traffic, and local job openings).

The handful of local topics which local news enthusiasts as a whole are much more likely than other adults to follow therefore stand out.  They are: 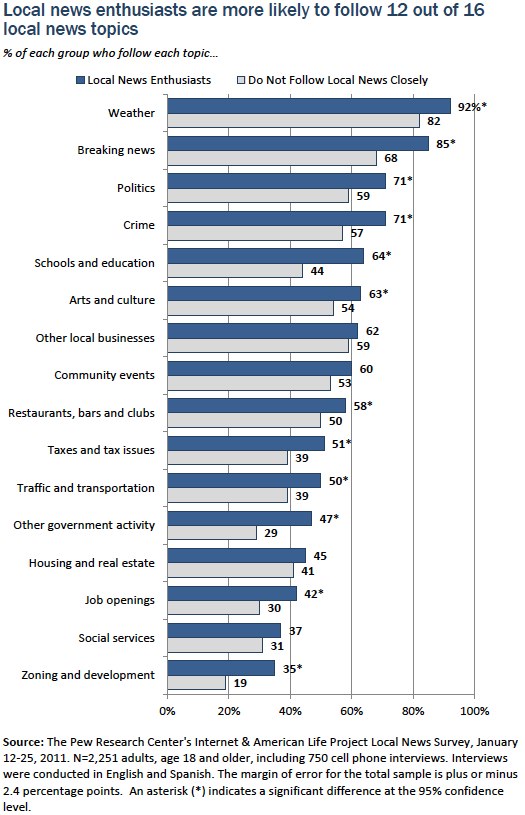 Local news enthusiasts prefer newspapers for most topics, while others are more reliant on the internet

Local news enthusiasts are heavily reliant on traditional sources, though many are also turning to the internet

These time sensitive topics (breaking news and weather) are more likely to be followed by this group via television.  At least six in 10 prefer television news for following weather (66%) and breaking news (62%).  About one-third follow politics (32%) and crime (32%) via TV news and one-quarter (23%) prefer to follow traffic this way.  Fewer than two in 10 prefer TV news for information about local government activities (15%), arts and culture (15%), schools (12%) or taxes (12%), and fewer than one in 10 prefer television news for the other seven topics covered.  Local news enthusiasts are more likely than other adults to prefer TV for each topic in the survey, with the exception of local businesses, community events, job openings, zoning and social services. 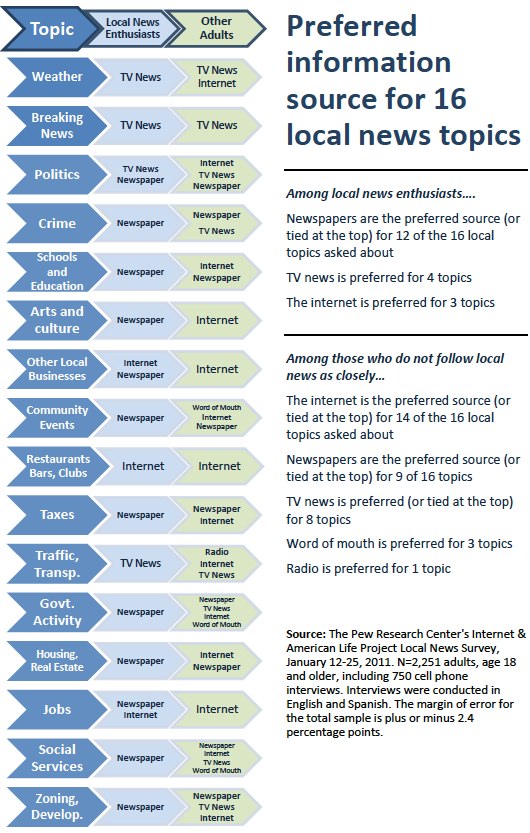 Local news enthusiasts are comparable to other adults in their use of radio, mobile phone, word of mouth, or local government as a source of information about local topics.  While word of mouth and radio top the list of sources used for a handful of topics among adults who do not follow local news closely, they are not used more widely by that group.  Rather, they are at the top of a list of sparingly used sources.

Specifically, among local news enthusiasts under age 40, the internet is the preferred source for each of the following topics:

These findings may signal significant changes to come in the local news environment, particularly in the delivery of local news to those most interested in following events in their local community.