Social networking sites have become places where political conversation, debate, and proselytizing occur, especially during campaign seasons. These new arenas of political discussion have drawn attention among political activists and have been a major focus of activity particularly since the campaign of Barack Obama aggressively embraced them in the 2008 presidential campaign. At the same time, some analysts have expressed concerns about the impact of social networking sites on the broad political culture. They have worried that on SNS users might customize their friendship networks by hanging out only with people who share and reinforce their political views.

A new survey by the Pew Research Center’s Internet & American Life Project posed a series of questions about people’s general use of SNS for politics and about the ways in which they interact with friends on the sites over political material. One goal of the survey was to see if people are using the sites in a way that suggests they live in social network “echo chambers” of like-minded friends. 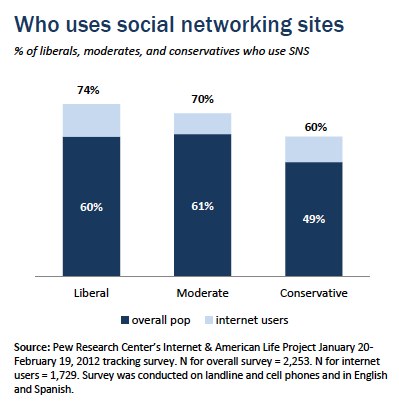 We focused our questioning about politics with those SNS users and a subset of them who said they received political material from their friends on the sites.

It turns out that SNS postings reveal surprises for many users when it comes to discovering the political views of their friends. We asked all the SNS users in our survey whether they have ever learned that someone’s beliefs were different than they thought based on something they posted on the sites. Some 38% of SNS users said they had made that discovery and 60% said they had not.

Democrats, liberals, and people with very conservative views were more likely than others to say that they had been surprised about someone’s views as they were expressed on SNS. 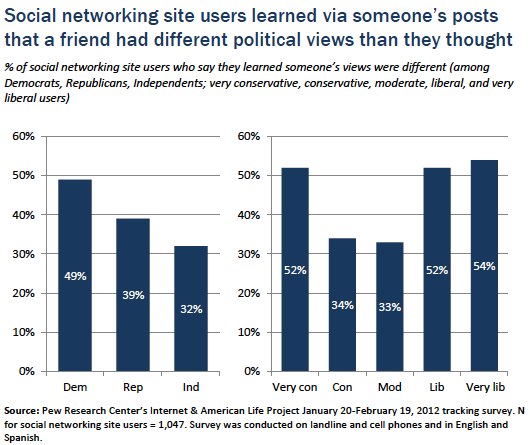 Politics can be a sensitive subject and a number of SNS users have decided to block, unfriend, or hide someone because of their politics or posting activities. In all, 18% of social networking site users have taken one of those steps by doing at least one of the following:

Of course, that means that 82% of SNS users have not taken any steps to ignore or disconnect from someone whose views are different – or have not encountered any views that would prompt such a move.

Liberals are the most likely to have taken each of these steps to block, unfriend, or hide. In all, 28% of liberals have blocked, unfriended, or hidden someone on SNS because of one of these reasons, compared with 16% of conservatives and 14% of moderates. 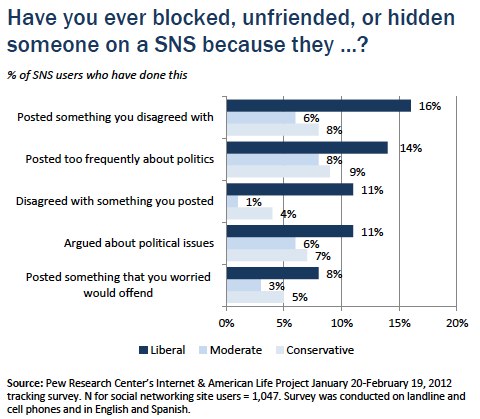 The 18% of SNS users who had dumped or shunned someone because of their political disagreements were asked a follow-up question about the people who were dropped. The majority were people who did not have deep connections to the user who dropped them:

The cohort is so small that it is not possible to do a statistically reliable analysis of trends. But as a rule, there were no ideological differences among those who had dropped someone from their SNS world because of politics.

Are social networking sites hotbeds of political affirmation and reinforcement for users? There are a variety of ways that people can express their support on social networking sites like Facebook and a portion of users have used various means to add their support to political activity on SNS. The most fervid ideological believers are the most likely to have done all of the activities on SNS that we queried (see charts below). At the same time, most users do not engage in supporting political content on the sites.

Overall, these figures suggest that the majority are not actively seeking out friends based on political affiliation or views. 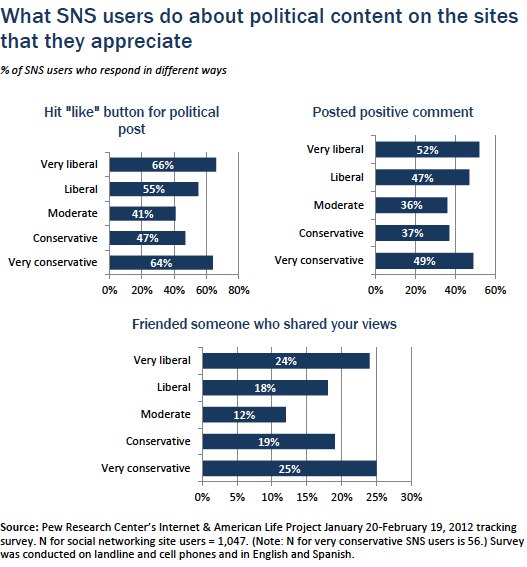 For some users politics is an off-limits subject. Some 22% of SNS users say they have decided not to post political comments or links to political material because they were worried it might upset or offend someone. Some 77% of SNS users said they never acted this way.

Liberals and conservatives are more likely than political moderates to have self-censored their posts. 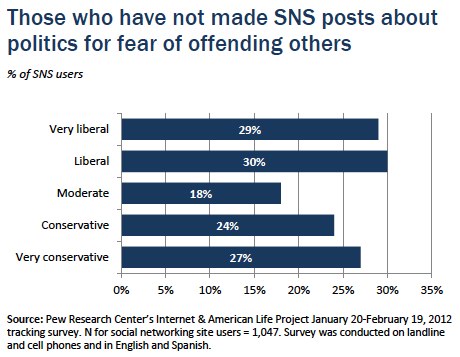 Three-quarters of those SNS users – 75% – say their friends post at least some content related to politics on the sites from time to time. They amount to 40% of the entire adult population.

Asked how often they agree and disagree with their friends’ postings and shared material on SNS, those who receive political material tend to agree with their friends’ posts “only sometimes.” A quarter of those who receive political information on SNS – 25% – say they always agree or mostly agree and 64% say they only agree sometimes. On the other end of the spectrum, 9% of this group of SNS users say they never disagree and the rest have disagreements at least some of the time. 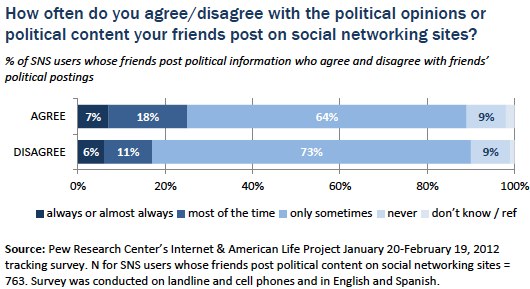 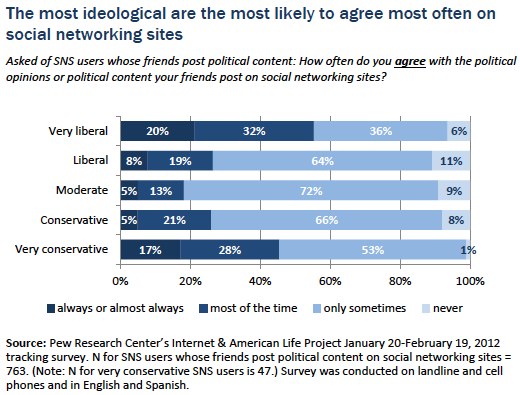 We asked those whose friends post political material what they do when they disagree. Some 66% of these SNS users said they usually ignore the material they objected to and 28% said they usually respond with a comment or post of their own. And 5% said it depends on the circumstances.

Interestingly enough, there were no differences in these responses among party partisans or different ideological groups. All were equally likely to say they usually ignore the posts or respond to them.

Some 37% of SNS users who exchange material about politics on the sites have gotten strong negative reactions when they posted political material and 63% said they have never experienced such reactions. Interestingly enough, there is no notable variance across the political spectrum on this question: Republicans, Democrats, liberals, and conservatives among SNS users have experienced the same level of challenge from their SNS friends.