Two-thirds of online adults have a profile on a social networking site, and most restrict access to friends only.

Two in three online adults (63%) say they currently maintain a profile on a social networking site, up from just 20% who said they had ever created a profile in 2006.3 When asked to think about the profile they use most often, 58% say their main profile is set to be private so that only friends can see it. Another 19% say they have their profile set to be partially private so that friends of friends or networks can view it and 20% say their main profile is set to be completely public.4

A notable portion of those who already restrict access to their SNS profile take further steps to limit what certain friends can see. Some 26% of those whose profile is at least partially private say they use additional privacy settings to limit what certain friends can and cannot see. This finding is consistent across all core demographic groups.

However, there is a significant gender gap when it comes to the way male and female social media users choose to manage their profiles. Women are much more conservative in the basic settings they choose; 67% of female profile owners restrict access to friends only compared with 48% of male profile owners. Likewise, men are more apt than women to choose partially private (23% vs. 16%) or fully public (26% vs. 14%) settings. 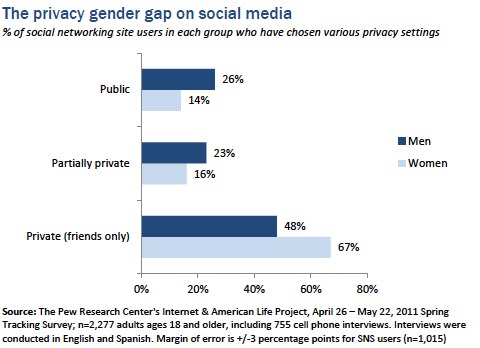 Young and old alike choose private settings for their profiles.

When looking at social media usage patterns, age tends to be one of the strongest variables. For instance, younger users have long been the most active users of the sites and the most active managers of their online reputations.5  However, when it comes to basic privacy settings, users of all ages are equally likely to choose a private, semi-private or public setting for their profile. There are no significant variations across age groups.6 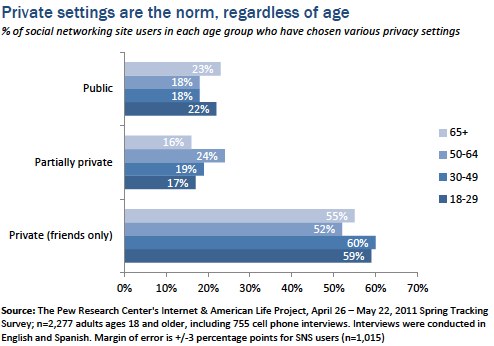 The choices that adults make regarding their privacy settings are also virtually identical to those of teenage social media users.7 Close to two-thirds (62%) of teens who have a social media profile say the profile they use most often is set to be private so that only their friends can see the content they post.8 One in five (19%) say their profile is partially private so that friends of friends or their networks can see some version of their profile. Just 17% say their profile is set to public so that everyone can see it. This distribution is consistent regardless of how often a teen uses social network sites. 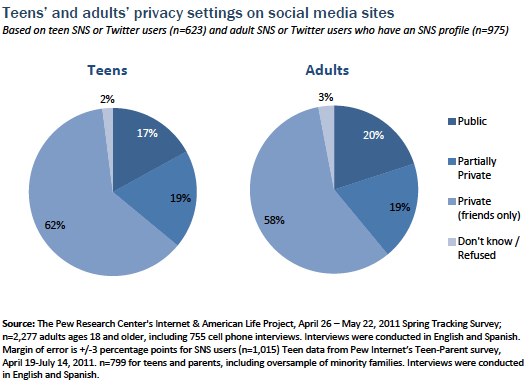 Half of social media users report some difficulty in managing the privacy controls on their profile, but few describe their experience as “very difficult.”

The complexity of privacy settings varies greatly across different social media sites, and in the case of Facebook, the default settings have changed significantly over time.9 In all, 48% of social media users report some level of difficulty in managing the privacy controls on their profile, while 49% say that it is “not difficult at all.” Few users (2%) describe their experiences as “very difficult,” while 16% say they are “somewhat difficult” and another 30% say the controls are “not too difficult” to manage. Young adults are considerably more likely than any other age group to feel fully confident in their privacy controls; 57% of social media users ages 18-29 say it is “not difficult at all” to manage them, compared with 48% of those ages 30-49, 41% of those ages 50-64 and 31% of those ages 65 and older.

Social media users with the highest levels of education report the most difficulty in managing the privacy controls on their profiles.

Social media users who are college graduates are significantly more likely than those with lower levels of education to say that they experience some difficulty in managing the privacy controls on their profiles. For those in the highest education bracket, the majority (62%) report some level of difficulty, compared with just 42% of those with some college education. However, again, few college graduates who are social media users (2%) describe their experiences as “very difficult.” Instead, they are more likely to report that managing the privacy settings on their profile is “somewhat difficult” (21%) or “not too difficult” (39%). Those with only some college education report less trouble; 12% describe their experiences as somewhat difficult and 29% say that managing their controls is “not too difficult.”10

Profile “pruning” is on the rise. Deleting unwanted friends, comments and photo tags grows in popularity.

Over time, as social networking sites have become a mainstream communications channel in everyday life, profile owners have become more active managers of their profiles and the content that is posted by others in their networks. Two-thirds of profile owners (63%) have deleted people from their networks or friend lists, up from 56% in 2009. Another 44% say they have deleted comments that others have made on their profile, up from just 36% two years prior. And as photo tagging has become more automated on sites like Facebook, users have become more likely to remove their names from photos that were tagged to identify them; 37% of profile owners have done this, up from 30% in 2009. 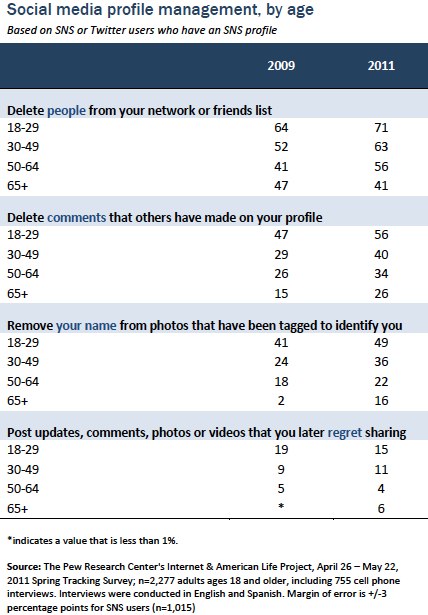 Women and young adults are the unfriend-liest.

Female social media users are more apt than male users to cull their list of friends and delete any unwanted contacts: 67% of women who maintain a profile say they have deleted people from their network, compared with just 58% of men. Likewise, young adults are more active unfrienders when compared with older users. Seven in ten (71%) young adult social media users say they have deleted contacts from their friends list, compared with 63% of users ages 30-49, 56% of those ages 50-64 and only 41% of those ages 65 and older.

Deleting social media comments is part of the reputation management work of being a young adult.

The task of removing photo tags is also much more common among young adults.

Whether because there are simply more photos being shared or there is more sensitivity to their content, young adult social media users are the most likely age group to report removal of photo tags. Fully half of young adult social media users (49%) say they have deleted their name from photos that were tagged to identify them. That compares to 36% of social media users ages 30-49, 22% of those ages 50-64 and only 16% of those ages 65 and older. As with comments, there are no significant gender differences; male and female users are equally likely to delete photo tags (36% vs. 38%).

While users manage the content that others post, one in ten profile owners voices regrets about their own posts.

Whether due to the influx of new social media users in recent years or to those who are simplifying their online identity management, users have become more likely to maintain a profile on just one site. More than half (55%) of social networking and Twitter users say this, up from 45% in 2009.