28% of American adults use mobile and social location-based services

More than a quarter of all American adults—28%—use mobile or social location-based services of some kind. This includes anyone who takes part in one or more of the following activities:

Taken together, 28% of U.S. adults do at least one of these activities either online or using their mobile phones—and many users do several of them. This is the Pew Internet Project’s most expansive study of location services to date; in previous surveys, we have asked only about the use of geosocial or “check in” services.7 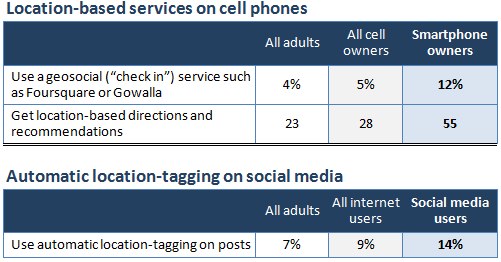 Several groups have higher-than-average rates of location service usage, including:

Geosocial and location-based services on smartphones

Fully 83% of all American adults ages 18 and older own a cell phone, a number that has remained relatively steady since mid-2008. Of these cell phone owners, 42% own a smartphone, which translates to 35% of all adults.9 Almost six in ten (58%) of these smartphone owners use a geosocial or a location-based information service of some kind. 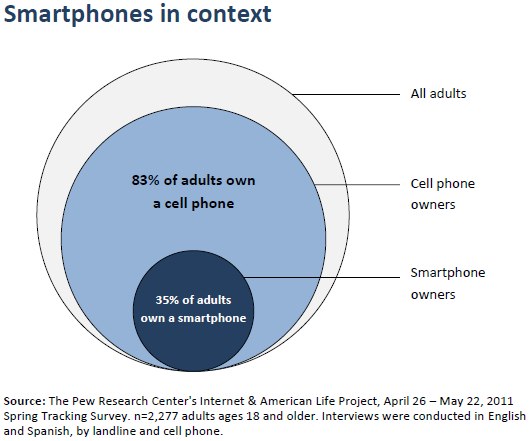 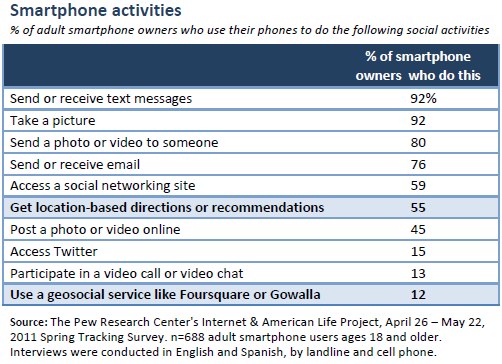 For the full list of activities that people do with their phones, as well as further analysis by demographic group, please see “Americans and their cell phones.”10

As of May 2011, 12% of smartphone owners (5% of all cell phone owners) use a geosocial service such as Foursquare or Gowalla to “check in” to certain locations or share their location with friends. This is the first time the Pew Internet Project has asked mobile phone users about geosocial services. Previously, a May 2010 survey found that, among internet users, 7% of adults who went online with their mobile phone used a location-based service.11

Among smartphone owners, geosocial “check in” services service such as Foursquare or Gowalla are most popular with younger adults (under age 50) and minorities. Geosocial services are also less popular among smartphone users in households making at least $75,000 per year than among those in lower income brackets. There are no significant differences by gender or education level.

In looking at broader uses of location-based services, we found that 55% of smartphone owners use their phone to get directions, recommendations, or other information related to their present location. This was the first time the Pew Internet Project has asked about general location-based services, which can range from GPS-enabled map services to reviews of nearby attractions using an app or a browser. 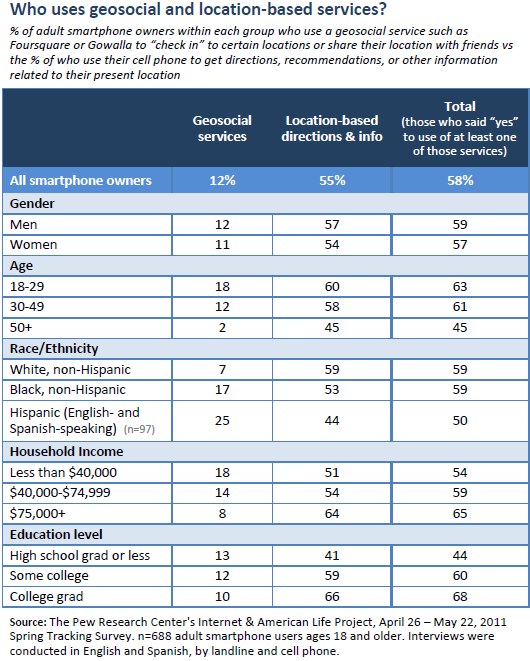 These findings follow general trends that we have seen in other mobile activities, which include a high level of mobile engagement for minorities and those under age 50.12

Many social media sites, including social networking sites such as Facebook and the status-updating service Twitter, enable users to set up the service to automatically post information about their current location along with their updates on the site. Our survey found that 14% of social media users take advantage of these services, and have set up their account to automatically include their location in their posts. 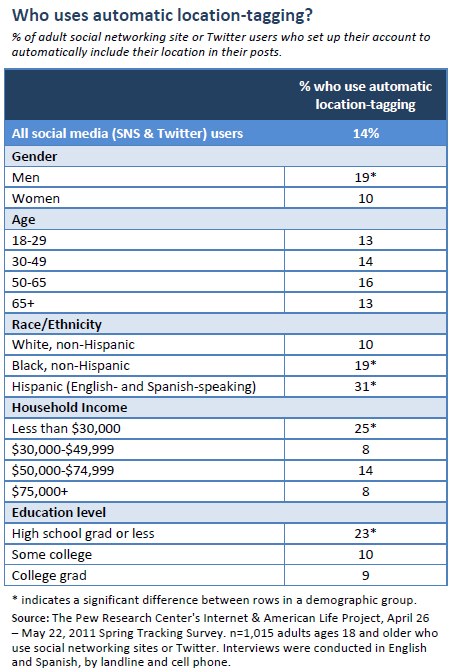