The internet gives patients and caregivers access not only to information, but also to each other.

Many Americans turn to friends and family for support and advice when they have a health problem. This report shows how people’s networks are expanding to include online peers, particularly in the crucible of rare disease. Health professionals remain the central source of information for most Americans, but “peer-to-peer healthcare” is a significant supplement.

This report is based in part on a national telephone survey of 3,001 adults which captures an estimate of how widespread this activity is in the U.S. All numerical data included in the report is based on the telephone survey. The other part of the analysis is based on an online survey of 2,156 members of the National Organization for Rare Disorders (NORD) who wrote short essays about their use of the internet in caring for themselves or for their loved ones.

One in five internet users have gone online to find others like them.

Eighteen percent of internet users say they have gone online to find others who might have health concerns similar to theirs.

Some of the most notable interactions involve people who meet online for the first time. There were numerous examples of these powerful long-distance connections in our online survey of patients and caregivers who take part in rare-disease communities. One adult living with a rare condition described how she connected with another patient online, bonded, and then enriched the friendship with in-person encounters: “The first time I met another patient, face to face, I sobbed. I was overjoyed and began to communicate with them on a regular basis and my network grew.”

In the moment of need, most people turn to a health professional for information, care, or support.

The majority of health care conversations happen offline: Just 5% of adults say they received online information, care, or support from a health professional, 13% say they had online contact with friends and family, and 5% say they interacted online with fellow patients.

In our online survey, patients and caregivers were asked the same question about the last time they had a health issue. The people living with rare disease who responded to the survey far outpaced all other groups, including those living with chronic conditions, in tapping the wisdom of their peer network. More than half of rare-disease respondents say they turned to family and friends. Another majority say they turned to others who have the same health condition.

A mother of a small child with a rare condition wrote about the lifeline she has found online: “When a disease is so rare and there are no folks in your town, and few in your state who are going through what you are going through, you need a support group that encompasses people from all over the world. Getting to know people through the disorder has been an amazing experience and has created incredibly wonderful friendships and ties.”

People turn to different sources for different kinds of information.

In the national survey, adults were asked which group is more helpful when they need certain types of information or support: health professionals like doctors and nurses or peers like fellow patients, friends, and family. The pattern of their responses was pretty clear: When the issue involved technical issues related to a health issue, professionals held sway. When the issue involved more personal issues of how to cope with a health issue or get quick relief, then non-professionals were preferred by most patients. 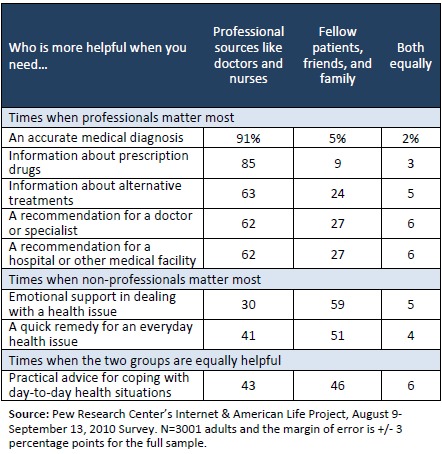 Many people find the internet to be a valuable tool, whether they are using it to search for a quick answer or gain a deeper understanding of a new treatment option or prescription. As one respondent in the online survey commented, “When time is of the essence, search on the internet is the only way to time travel.” The internet is also, as this study shows, a way to tap into our instincts to gather together, help other people, and be helped ourselves.