These figures translate into 23% of internet users and 7% of cell phone owners who have participated in video calls, chats, or teleconferences.

Some of the key findings in the most recent survey related to online video calls, which are conducted by 23% of the adults who are internet users:

Some of the key findings in the most recent survey related to video calls on cell phones, which are conducted by 7% of the adults who cell phone owners:

Video calling has become increasingly available as camcorders have spread through the online environment, cameras have been built into smart phones, and as video-chat services like Skype, Google Talk, and Apple iChat have become a feature of the online and smart phone environment. Teleconferencing is also becoming more embedded in the business environment.

This summer, in a nationally-representative telephone survey using landlines and cell phones, the Pew Research Center’s Internet & American Project asked for the first time about the prevalence of video calling both online and on cell phones.

The survey of 3,001 adults found that 74% of American adults are internet users and, among those internet users, 23% have participated in video calls, chats, or teleconferences. The survey also found that 85% of American adults have cell phones and, among those cell owners, 7% have used their phones for video calls, chats, or teleconferences. Overall, that means that 19% of Americans have either used the internet or their cell phone to participate in video calls – and in many cases, people have used both technologies for video chats.

In April 2009, the Pew Internet Project asked internet users about video calls and found at the time that 20% of them had participated in such calls. So, there has been a slight uptick in the number of Americans who use the internet for video calling – from 20% in April 2009 to 23% in the summer 2010 survey. The Project’s survey also asked people if they had participated in such calls “yesterday” and the surveys show that the percentage of video callers online on any given day rose from 2% in April 2009 to 4% in the summer of 2010.

The following table gives a breakdown of the demographic differences among internet users when it comes to video calling, chatting, or teleconferencing.

For the first time, Pew Internet asked cell phone owners about video calls, chats, and teleconferences and found that 7% of cell owners have taken advantage of that feature. Video activities are far less common than other cell features. For instance, in the same survey, Pew Internet found that 74% of cell owners use text messaging features, 39% use their phones to access the internet, 34% use them for email, and 30% use them for instant messaging.

The following table gives a breakdown of the demographic differences among cell owners when it comes to video calling, chatting, or teleconferencing. 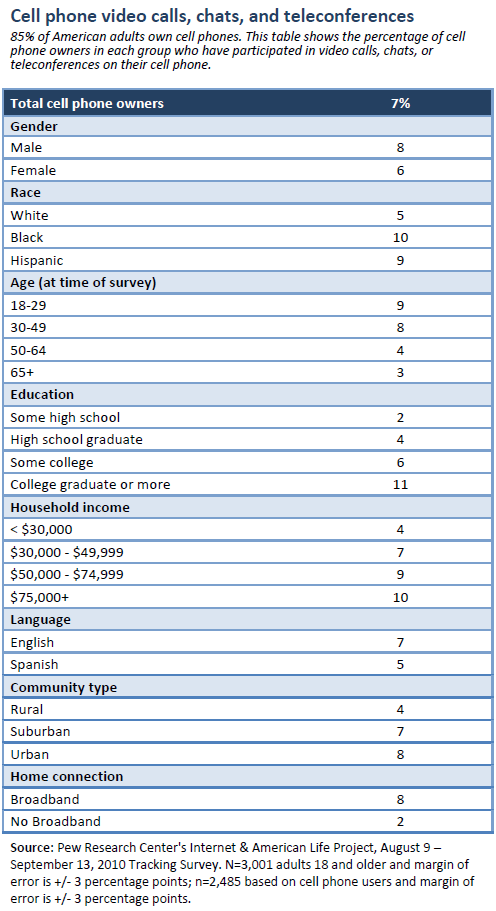