Each spring, the Pew Research Center’s Internet & American Life Project conducts a survey designed to assess the state of broadband adoption by Americans and, particularly, to probe the attitudes and experiences of those who do not use broadband. Over the last decade, broadband adoption has gone from being the province of the elite to a mainstream behavior by the majority of Americans.

Yet even as broadband use has spread, there has been persistent evidence that some segments of the population are not part of the broadband adoption story. The Obama Administration has devoted considerable time and effort to promoting broadband adoption and expanding government efforts to bring it to non-user populations. Some $7.2 billion of the $787 billion federal stimulus program approved in February, 2009 was set aside for grants and mapping efforts designed to target underserved groups. Under a mandate from Congress, the Federal Communications Commission produced a major broadband plan in March 2010. The 360-page plan contained scores of recommendations for how government agencies could encourage expanded broadband access. The recommendations also pressed for changes that could allow the internet to be used to improve Americans’ lives in such areas as delivering economic growth, improving health care, facilitating advances in government services, and improving the environment.1

This year’s Pew Internet broadband survey was conducted with that dramatically changed policy environment as backdrop. In addition to capturing data as we had in the past about the non-user cohort, we did some things this year that we had not done in the past, such as evaluating Americans’ attitudes about the “value” of a broadband connection for key activities. Further, we tried to gauge public sentiment on the key policy question: Should the government make the spread of affordable broadband a priority or not? 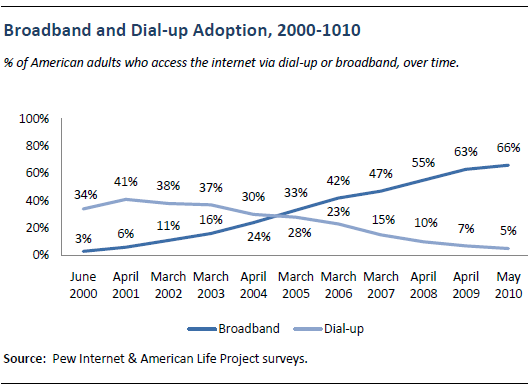 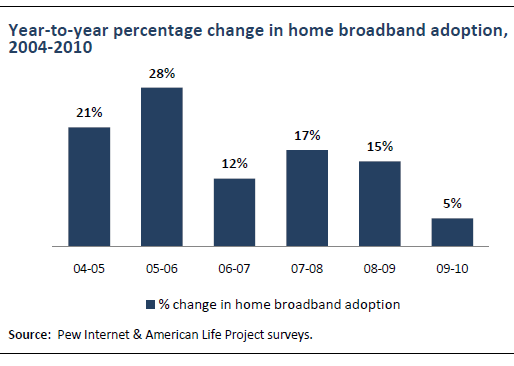 In contrast to the population as a whole, broadband adoption among African-Americans grew significantly between 2009 and 2010

African-Americans are one of the few major demographic groups to experience notable year-to-year growth in home broadband adoption. The percentage of African-Americans adults with a home broadband connection grew from 46% in April 2009 to 56% in May 2010,3 which works out to a 22% year-over-year increase. No other demographic group saw their overall broadband usage grow by more than ten percent on a year-over-year basis.

Even with this increase, African-Americans continue to trail whites in their use of broadband technologies. However, the gap between whites and blacks has been cut approximately in half over the last year. In 2009, the gap between blacks and whites was 19 percentage points (65% vs. 46%); in 2010 that gap stands at 11 points (67% vs. 56%). 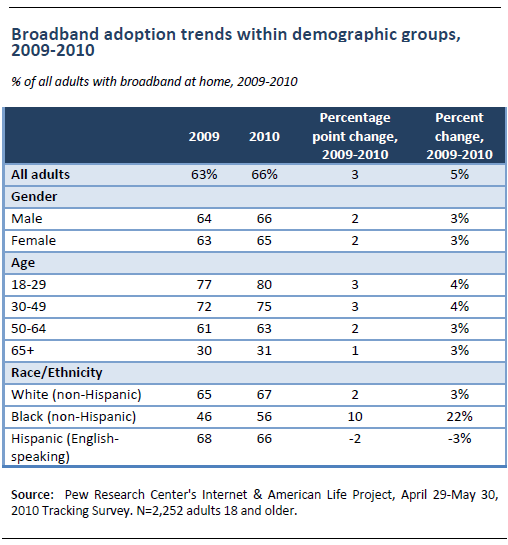 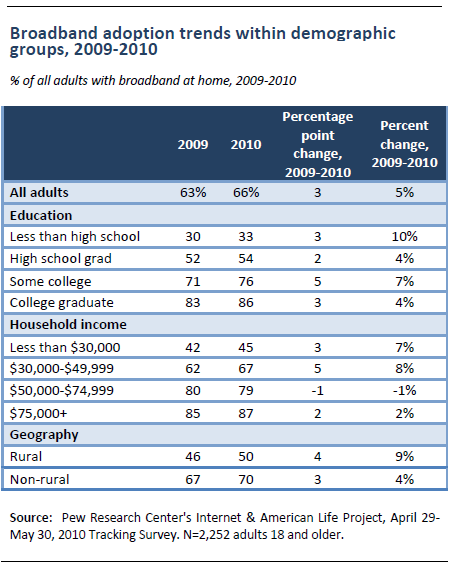 One-third of broadband users subscribe to a premium service, and the average broadband subscriber pays $41.18 per month for service

In May 2008 we first asked respondents with home broadband service whether or not they paid extra for “premium” broadband service promising higher speeds. Our findings on this question have been fairly consistent over this time—at the moment, 51% of broadband subscribers subscribe to a basic service, one-third (36%) pay extra for a higher-speed premium service, and an additional one in ten (13%) are not sure whether they have a basic or premium service. 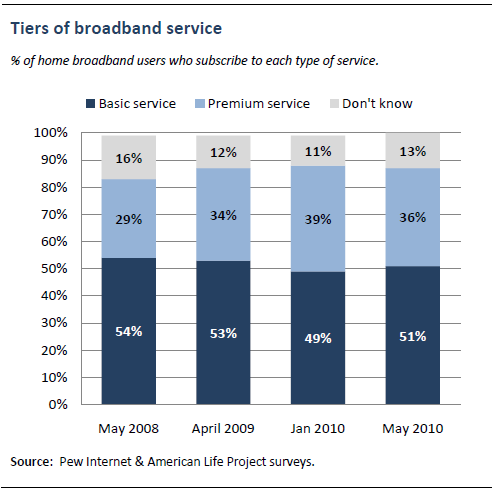 Overall there is relatively little variation among broadband users on this question; the biggest differences are associated with household income. Broadband subscribers with an annual household income of $50,000 or more are evenly split between basic subscribers (46%) and premium subscribers (42%). By contrast, broadband users living in households earning less than $50,000 per year are much more likely to subscribe to a basic service than to a premium offering (59% of such households have a basic service, while 29% pay extra for a premium service). Additionally, parents are somewhat more likely than non-parents to subscribe to a premium broadband service (40% vs. 33%).

Perhaps due to the proliferation of bundled services that incorporate internet, phone and television service, many home internet users are unsure of what they pay for their connection. When asked what they pay for internet access, one quarter of home users are unable to provide an answer. Among those who do provide an answer, the average home broadband user pays $41.18 per month for service. This figure is little changed from what we found in our spring 2009 survey, when the average home broadband user paid $39.00 per month.

Most non-internet users have limited exposure to online life, and half do not go online because they do not see the digital world as relevant to them

One in five American adults (21%) do not use the internet or email from any location, and a majority of these non-users have little exposure to the online world. Some 16% of non-users live in a household where someone else uses the internet (even if they personally do not) and 22% used the internet or email in the past but no longer do so. Taken together, that means that one-third (34%) of non-internet users have some familiarity with the internet, either from past personal experience or from living in a household where someone else goes online. Since we first asked these questions in spring 2002, roughly one in five non-users have consistently answered “yes” to each of these questions. 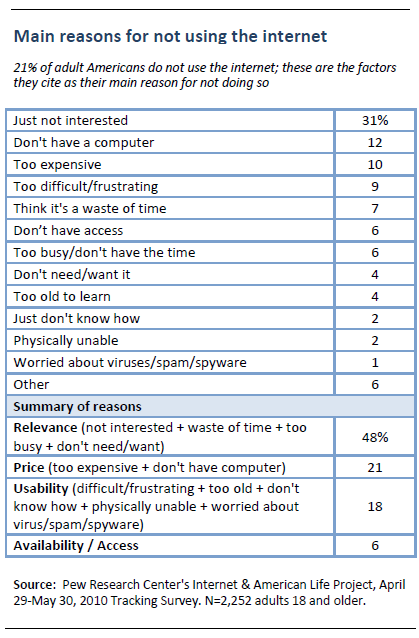 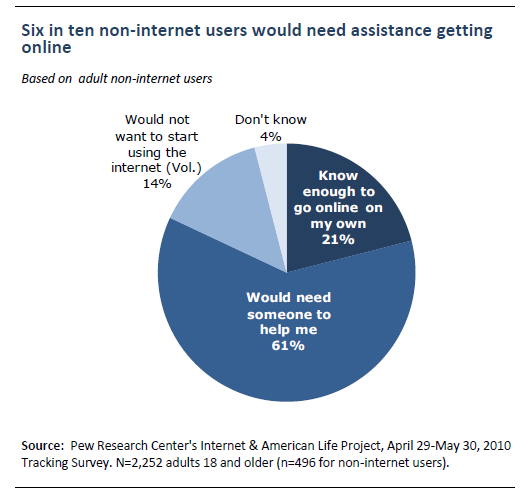 Next: Attitudes towards broadband and broadband investment
← Prev Page
Page1You are reading page2Page3Page4
Next Page →