Teens who text and talk while driving

Over the summer of 2009, the Pew Research Center’s Internet & American Life Project conducted a survey of 800 teens ages 12-17 asking about their experiences with cell phone use in cars.  All of the teens in our survey were asked about their experiences as passengers, and if they were 16 or older and have a cell phone, they were also asked about their own actions behind the wheel. Additionally, the Project and the University of Michigan conducted 9 focus groups with teens ages 12-18 between June and October 2009 where the topic of driving and mobile phones was addressed. 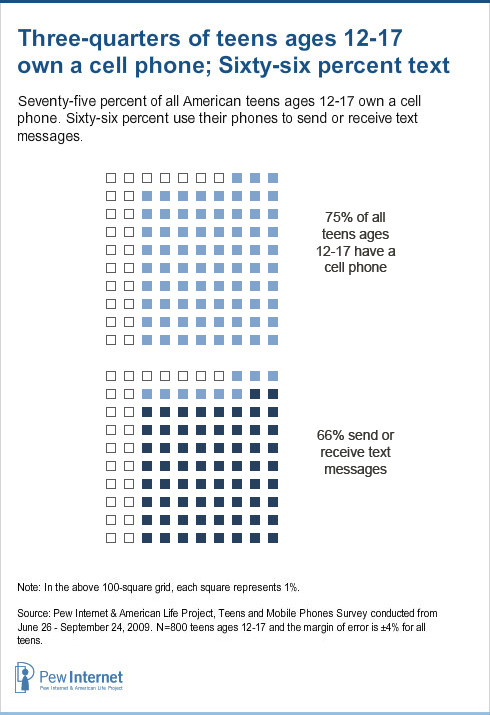 Fully 75% of all American teens ages 12-17 now own a cell phone, and 66% use their phones to send or receive text messages. Older teens are more likely than younger teens to have cell phones and use text messaging; 82% of teens ages 16-17 have a cell phone and 76% text.

Boys and girls are equally likely to report texting behind the wheel; 34% of each group say they have used text messaging while driving.

However, it is important to note that some of these teens may use hands-free devices or a speakerphone function with their cell phones. This survey did not include questions to differentiate between conversations with handheld phones and those that took place with the assistance of a hands-free device or phone feature.

Indeed, in focus groups and written surveys conducted in partnership with the University of Michigan, some teens told us that they draw a line between conversations and texting, while others expressed concern over any activity that takes the driver’s eyes off the road. One middle school-aged girl wrote: “I’m very concerned because to me it’s not too safe to drive and text or talk (…) because you’re looking down in order to read it or text back.”

Likewise, one middle school-aged boy wrote: “I do worry about it because what if you’re driving and not paying attention to the road you can hit someone or make them hit you.”

One 9th-10th grade boy said, “People texting worries me more than people calling people, because texting is more distracting than talking on the phone because you can pay more attention to the road when talking than texting.” 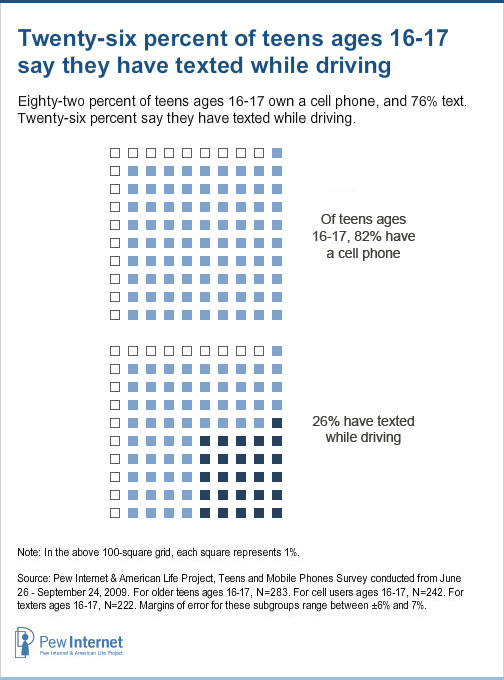 The teens in our focus groups who said they texted while driving reported a variety of motivations for their behavior, including the need to report their whereabouts to friends and parents, getting directions and flirting with significant others. Teens also told of a variety of practices they use to try to increase safety while still maintaining the ability to text in the car. Some felt as though they could safely manage a quick exchange of texts while the car was stopped. One high school-aged boy shared that he would text “only at a stop sign or light but if it’s a call they have to wait or I’ll hand it to my brother or whoever is next to me.”

Others told of holding the phone up to keep their eyes simultaneously on the road and the phone. “I try not to, but at a red light, it’s a lot easier” said one high school boy. “And if I do text while I’m driving, I usually try to keep the phone up near the windshield, so if someone is braking in front of me or stops short, I’m not going to be looking down and hit them.”

Some teens explained other methods for handling calls or texts while on the road “Most of my friends give me their phones to text for them and read their texts, so the driver doesn’t do it themselves,” wrote one older high school girl.

“I think [texting]’s fine…And I wear sunglasses so the cops don’t see [my eyes looking down].”

Other teens were more blasé about texting in the car. Said one high-school aged boy: “I think it’s fine…And I wear sunglasses so the cops don’t see [my eyes looking down].” Likewise, another high school-aged girl wrote that she texts “all the time,” and that “everybody texts while they drive (…) like when I’m driving by myself I’ll call people or text them ‘cause I get bored.”  One older high school-aged boy explained that he limits his texting while driving only if his parents are around: “I’m fine with it, just not with my mom and dad in the car. Like when I’m with my brother, I do it.”

Teens did make a distinction between reading text messages and sending them. “There’s a difference, I think,” said one older high school boy. “Because just reading a text isn’t that bad, it’s just reading and then moving on. If you’re texting, it’s going to take more time when you’re supposed to be driving, and that’s when most people get in accidents.”

They also made a distinction between placing and answering calls on the phone in the car and sending and receiving text messages. “It’s different because texting you mostly have to look down,” said one middle school boy. “[While] calling you’re still mostly focused but you could get into conversations and not be aware of what’s going on and stuff.”  Another high school boy wrote: “It depends on what the driver is doing -texting or calling. If he’s texting, to me that’s a dangerous thing. If the driver is using the phone to chat with people, I am worried, but if he or she uses the phone [in] an emergency, I’m not worried as much.”

Distracted drivers with teens as passengers

Among all teens ages 12-17, 48% say they have been in a car when the driver was texting.10 The older teens in our sample reported a higher  incidence of this experience; while 32% of teens ages 12-13 say they have been passengers in a car while the driver was texting at the wheel, 55% of those ages 14-17 report this. Looking only at those who are of driving age—16 and 17 year-olds—the rate jumps to 64%.

However, it is important to note that the survey question wording does not identify the age of the distracted driver. The teens who were interviewed in the phone survey could be reporting experiences as passengers with adult drivers or other teen drivers. Indeed, as noted above, in the focus group setting, many teens relayed accounts of their parents or other adult relatives texting and talking while driving. While this was cause for concern for some, others felt that their parents and others were “good drivers” who could manage their phones safely.

“[My dad] drives like he’s drunk. His phone is just like sitting right in front of his face, and he puts his knees on the bottom of the steering wheel and tries to text.”

When asked whether he had any concerns about safety when a driver uses the phone, one middle school-aged boy wrote:  “I am concerned because when my mom drives she talks on the phone a lot so she is still alert but she can get kind of dangerous.” Another 9th/10th grade boy said “Yeah [my dad] he drives like he’s drunk. His phone is just like sitting right in front of his face, and he puts his knees on the bottom of the steering wheel and tries to text.” 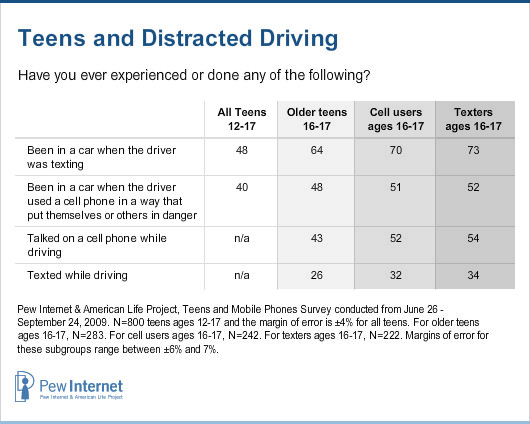 The frequency of teens reporting parent cell phone use behind the wheel in our focus groups was striking, and suggested that, in many cases, texting while driving is a family affair. When one middle school-aged boy was asked how often he was in a moving vehicle when the driver sends a text message, he replied: “All the time. My mom, sister or brother will sit behind the wheel the whole time and just text away.” Similarly, a middle school girl told us: “My uncle will drive and text while he is driving – he will text no matter where he is.”

“I don’t really get worried because everyone does it. And when my mother is texting and driving I don’t really make a big deal because we joke around with her about it”

Other teen respondents referred to their parents’ use of the phone while driving as part of a larger societal norm. One middle school-aged girl wrote: “I don’t really get worried because everyone does it. And when my mother is texting and driving I don’t really make a big deal because we joke around with her about it (cuz she’s a crazy driver) but we don’t take it so serious.”

Texting was not the only cause for concern among the teens who participated in our focus groups.  We also heard about the distractions of drivers trying to access Global Positioning System (GPS) information while cars were in motion. And some teens cited other applications available on smartphones that take the driver’s eyes off the road. “My dad, he wasn’t really texting, but when he drives, he has a GPS on his Blackberry, so when he’s driving, he looks down at his phone” said one middle school boy, “…so it’s like the same [as] being distracted from the road. My mom always gets on him about how it’s unsafe and stuff.”

However, many of the teens we spoke with relayed experiences as passengers being driven by other young drivers. One young high school girl wrote about how often she’s a passenger with drivers who text: “Every time I leave to go somewhere with my brother or sister and my friends.  Every time!” Another high school age girl wrote: “My sister does it despite my mother’s warnings, so does my brother and my friends despite my warnings.”

Teen texters are more likely than non-texters to be a passenger of a distracted driver.

Teens ages 12-17 who use text messaging report a higher incidence of being passengers when the driver is texting or otherwise using the cell phone in a dangerous way. Among all teen texters, 58% say they have been in a car while the driver was texting. That compares with just 28% of non-texting teens. Similarly, 44% of texting teens say they have been in a car when the driver was using a cell phone in a way that put themselves or others in danger, while 31% of non-texting teens have had this experience.

Fully 73% of texting teens ages 16-17 have been in a car when the driver was texting.

“I’ll snatch the phone out of your hands – don’t be driving in the car with me and doing that . . . I want to live until the end of this car ride.”

Teens in our focus groups had a variety of responses to these situations – some were adamant and angry about being endangered.  One high school boy was asked about riding with drivers who text: “Not if they know what’s good for them. I’ll snatch the phone out of your hands – don’t be driving in the car with me and doing that…I want to live until the end of this car ride.”

Others were less concerned: “It doesn’t really bother me,” wrote one high school boy, “I’ve made and received calls almost every time I’ve driven.”  Another high school boy wrote: “I worry about if they can do it. If they know what they’re doing and looking up every second. I usually watch the road when it happens and tell them if they’re going off the road or something. I don’t really care though.”

Next: Resources and Methodology
← Prev Page
Page1You are reading page2Page3
Next Page →