In 2006 sociologists Miller McPherson, Lynn Smith-Lovin and Matthew Brashears delivered grim research findings: Americans’ core discussion networks, the network of people with whom people can discuss important matters, have shrunk and become less diverse over the past twenty years. They found that people depend more on a small network of home-centered kin and less on a larger network that includes ties from voluntary groups and neighborhoods. The authors argued that a large, unexpected social change was responsible for this trend and suggested it might be the rising popularity of new communication and information technologies such as the internet and mobile phone. Their study did not directly explore this possibility. Our current study was designed to probe:  Is people’s use of the internet and cell phones tied to a reduction in the size and diversity of core discussion networks and social networks more broadly?

In their paper “Social Isolation in America: Changes in Core Discussion Networks”  McPherson, Smith-Lovin and Brashears presented bleak findings from their analysis of the 2004 General Social Survey (GSS), a large biennial survey that explores social and economic trends. The authors found that, in comparison to the 1985 GSS, the data gathered in 2004 showed that the average number of confidants with whom Americans discuss important matters fell from 2.94 to 2.08. Furthermore, in 2004 a full 25% of Americans reported having no close confidants – almost a threefold increase since 1985.

McPherson et al. also argued that core discussion networks had not only shrunk but had become less diverse. A high proportion of those confidants lost between 1985 and 2004 were non-kin (not family members). That resulted in networks composed of a larger proportion of family members. In particular, spouses, partners, and parents were found to make up an increasingly large part of Americans’ core networks. The people Americans met through participation outside the home, such as in neighborhoods and voluntary organizations, had been disproportionately dropped from core networks.

The implications of these changes to the composition and structure of personal networks are far reaching. The diminished number of core ties in discussion networks suggests that Americans have fewer people with whom they can discuss important things, resulting in a decrease in the availability of social support to them. Scholars have showed that this includes access to emotional aid and companionship, and less access to critical resources in a crisis [2]. Core discussion ties are also important because other research has demonstrated that they are highly influential in attitude and opinion formation [3, 4]. Fewer and less diverse ties for the discussion of important matters may also lessen awareness of the many sides to an issue, shape opinion quality, and reduce political participation [5, 6]. Those with larger, more diverse networks tend to be more trusting and more tolerant [7]. They cope with daily troubles and trauma more effectively and tend to be physically and mentally healthier [8].

If the number and diversity of those with whom people discuss important matters is threatened, so is the ability of individuals to be healthy, informed, and active participants in American democracy.

While the rise of the internet and mobile connectivity coincides with the reported decline of core discussion networks, the mixed evidence on mobile phone use and internet activities does not provide a clear link between these trends (a review of this literature can be found in Appendix A: Extended Literature Review). However, until now, no study has focused directly on the composition of core networks and the role of internet and mobile phone use.

The Personal Networks and Community Survey

In July and August 2008, the Pew Internet & American Life Project conducted a landline and cellular random digit dial survey of 2,512 Americans, aged 18 and older. The goal of this study was to replicate and expand on the methodology used in the 1985/2004 GSS to measure core discussion networks. We wanted to explore the relationship between internet and mobile phone use and the size and composition of core discussion networks. Specifically, the intent was to address issues raised by McPherson, Smith-Lovin, and Brashears in their 2006 work that suggest that internet or mobile phone users disengage from local relations, are involved in fewer voluntary associations, have less public and more private activities, and that users of these ICTs sacrifice strong ties to confidants for a large array of dispersed social ties.

To address these questions, it was necessary to explore the possibility that the findings of the 2004 GSS are misleading.

The Pew Internet Personal Networks and Community Survey replicated key components of the 2004 GSS survey module on social networks. In addition, we attempted to minimize any technical problems that may have biased the 2004 GSS data, including problems with question order in the GSS survey instrument, and problems with the wording of the GSS survey (a complete discussion of these issues can be found in Appendix B: The GSS Controversy).6 A key component of the approach to overcome some of the limitations of the GSS data was the incorporation of a second question in the Pew survey that asked participants to list names of people in their core network.

As in the GSS, Pew Internet participants were asked to provide a list of people in response to the question:

“From time to time, most people discuss important matters with other people.  Looking back over the last six months — who are the people with whom you discussed matters that are important to you?”

Unlike the GSS, the Pew Internet survey respondents were also asked:

“Looking back over the last six months, who are the people especially significant in your life?”

The use of a second “name generator” allows us to test the possibility that something has changed in the way Americans think about the idea of “discussion.” If they do not think that “discussion” takes place outside face-to-face meetings, this second question was inserted to make sure that they were providing us the names of the major social actors in their lives, not simply giving us the names of those with whom they had face-to-face deliberations. We were interested in trying to get respondents to think in a more fully-rounded way about the key ties in their social networks. If the meaning of “discuss” has changed in Americans’ minds since the 1985 GSS survey, then a shift is expected to be observed: internet and cell phone users would be more likely than non-users to have people in their lives who are “especially significant,” but who might not be listed as “discussion” partners when they are dealing with important matters.7.]

Participants were asked additional questions about their neighborhood, participation in voluntary groups, use of public and semipublic spaces, network diversity, and use of the internet and mobile phones (a complete discussion of the survey methodology can be found in Appendix C: Methodology).8. It is not known if the number of core network member participants report is subject to the same inflation as a result of nonresponse. It is also possible that people have an easier time recalling names in the context of a longer personal interview in the home, than when talking on the telephone – perhaps not even at home (in the case of cell phone interviews). While we have no evidence of a response bias in our survey, if one exists we expect it has little influence on the size of core networks that participants reported, and that introduces no bias into the inferences we draw based on individual characteristics.]

Another look at the General Social Survey

Much of the analysis presented in this report draws comparisons to data collected as part of the 1985 and 2004 General Social Surveys. For ease of comparison, key variables from the 1985 and 2004 GSS have been reanalyzed and presented Table 1a and Table 1b. This analysis is based on the revised 2004 GSS dataset that was adjusted after researchers discovered that 41 cases were misclassified in the original dataset [11]. In addition, there are three key differences between the analysis of the GSS data used in this report and the analyses of previous authors [12, 13].

The first difference is that when the GSS asked participants about those with whom they discuss important matters, respondents could provide up to five unique names; the interviewer then asked detailed questions about each name provided. The GSS interviewer also noted if the respondent provided more than five names, but did not ask questions about these additional people. The Pew Internet Personal Networks and Community Survey replicated this procedure, recording up to five names to each name generator, but to reduce survey length did not record if participants listed more than the maximum of five names.

The second difference is in the presentation of a key variable for network diversity. Prior analysis of the GSS social network data on the diversity of core discussion networks focuses on the kin/non-kin composition of the networks [12, 13]. That focus is replicated in the current analysis. However, in prior work, when calculating the percentage of respondents that have “at least one non-kin confidant” researchers coded any name given by a respondent as a “non-kin” if the respondent identified him/her as having a connection classified as “co-worker,” “friend,” “advisor,” “neighbor,” or “group member,” even if s/he was also identified by the respondent as a spouse, parent, sibling, child, or other family member. For example, if a core tie was identified as both a brother and a neighbor, this tie was classified as non-kin. We were stricter in interpreting who could be non-kin; if a name given by a participant was identified as a spouse, parent, sibling, child or other family member, that name could not also be coded as non-kin.9 The way we used to identify kin/non-kin changed the characterization of 269 cases in the 1985 GSS, and 146 cases in 2004.

Table 1a and 1b report data from the 1985 and 2004 GSS that have been structured to match the Pew Internet Personal Networks and Community Survey – capping the number of core ties at five per name generator, conforming to our understanding of what should be considered non-kin, and constrained variables that focus on spousal networks to include only those who are married.

When the 1985 and 2004 GSS are compared, based on our analytical changes, the findings show the same general pattern that was reported by McPherson, Smith-Lovin, and Brashears in 2006, with a nearly identical magnitude of change across key variables – with one exception. The stricter interpretation of who should be classified as “non-kin” changes the proportion of the population with “at least one non-kin confidant.” Previously, the percent of Americans with at least one non-kin confidant in 1985 was reported as 80.1% and in 2004 as 57.2% [13]. Our analysis suggests that although there was still a large drop in the diversity of core discussion networks from 1985 to 2004, the magnitude of this decline is less than McPherson’s group stated; a difference of 16.2 percentage points, not the 22.9-point drop that was reported by McPherson and colleagues. 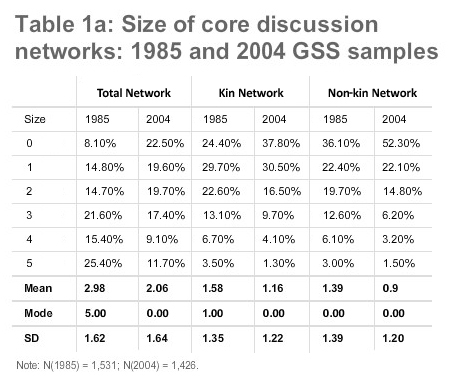