Generation Y, or young adults generally 18-32 years old who grew up in the Information Age, have been dubbed the ‘Net Generation.’ But, while these “digital natives” may be savvier with their gadgets and more keen on new uses of technology, their elders in Generation X, the Baby Boomers and older generations tend to dominate internet use in other areas. 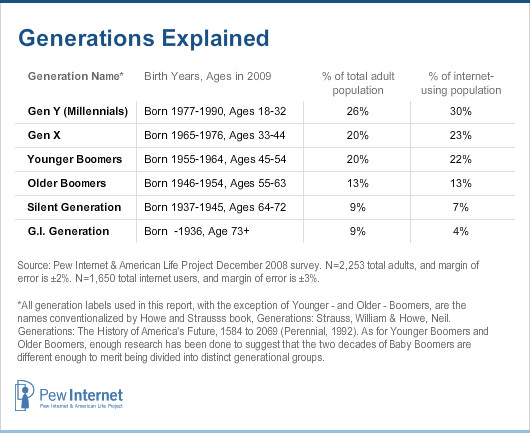 Internet use and email

The web continues to be populated largely by younger generations, as over half of the adult internet population is between 18 and 44 years old. But larger percentages of older generations are online now than in the past, and they are doing more activities online, according to the Pew Research Center’s Internet & American Life Project surveys taken from 2006-2008. 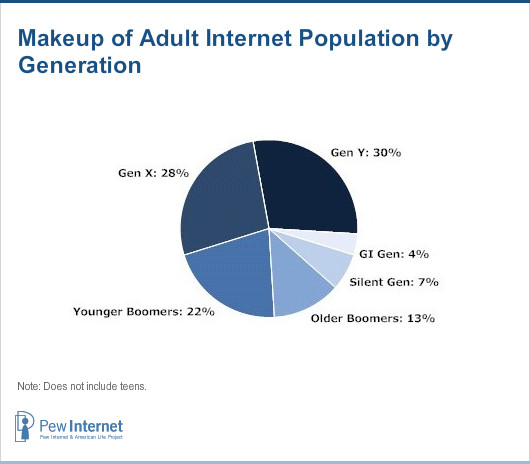 The biggest increase in internet use since 2005 can be seen in the 70-75 year-old age group. While just over one-fourth (26%) of 70-75 year olds were online in 2005, 45% of that age group is currently online. Much as we watch demographic and age groups move up in “degrees of access” on our “thermometers,”5 we can probably expect to see these bars become more level as time goes on. For now, though, young people dominate the online population. 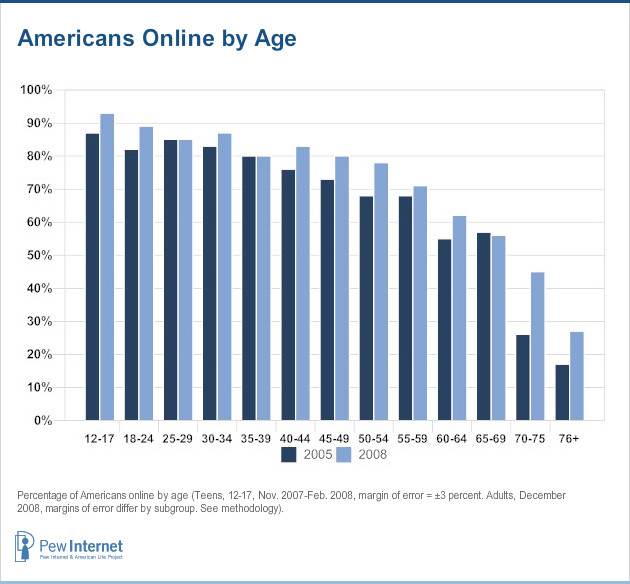 Instant messaging, social networking, and blogging have gained ground as communications tools, but email remains the most popular online activity, particularly among older internet users. Fully 74% of internet users age 64 and older send and receive email, making email the most popular online activity for this age group. At the same time, email has lost some ground among teens; whereas 89% of teens claimed to use email in 2004, just 73% currently say they use email.

By a large margin, teen internet users’ favorite online activity is game playing; 78% of 12-17 year-old internet users play games online,8 compared with 73% of online teens who email, the second most popular activity for this age group. Online teens are also significantly more likely to play games than any other generation, including Generation Y, only half (50%) of whom play online games.

Older generations use the internet as a tool for research, shopping and banking

Compared with teens and Generation Y, older generations use the internet less for socializing and entertainment and more as a tool for information searches, emailing, and buying products. In particular, older internet users are significantly more likely than younger generations to look online for health information. Health questions drive internet users age 73 and older to the internet just as frequently as they drive Generation Y users, outpacing teens by a significant margin. Researching health information is the third most popular online activity with the most senior age group, after email and online search.

Internet users ages 33-72 are also significantly more likely than younger users to look online for religious information and they are more likely to visit government websites in search of information.

The workplace online network is expanding to include more Generation Y users.9 Internet users 18-32 are going online more than ever to do research for their jobs. In 2007, 51% said they used the internet for their jobs other than for email, compared with 44% of the same group in 2005.

Contrary to the image of Generation Y as the “Net Generation,” internet users in their 20s do not dominate every aspect of online life. Generation X is the most likely group to bank, shop, and look for health information online.

Next: Broadband Access Has Increased for Many Age Groups
← Prev Page
You are reading page1Page2Page3
Next Page →

Generations Online in 2009
Generations explainedInternet use and emailTeens and Generation Y find entertainment and social networks onlineOlder generations use the internet as a tool for research, shopping and bankingVideo downloads, online travel reservations, and work-related research are now enjoyed more equally by young and old
Broadband Access Has Increased for Many Age Groups About Us, Methodology