19% of internet users have downloaded a podcast

As gadgets with digital audio capability proliferate, podcast downloading continues to increase. Currently, 19% of all internet users say they have downloaded a podcast so they could listen to it or view it later. This most recent percentage is up from 12% of internet users who reported downloading podcasts in our August 2006 survey and 7% in our February-April 2006 survey. 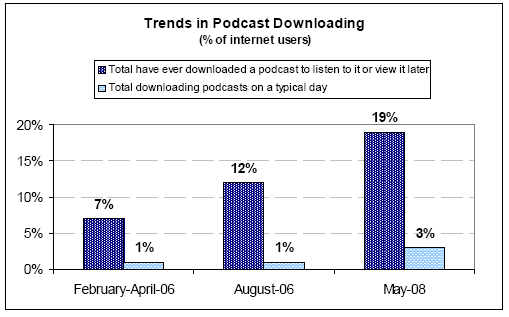 These results come from a nationally-representative telephone survey by the Pew Internet & American Life Project from April 8 – May 11, 2008 of 2,251 adults. The portion of the survey that covered podcast downloading was administered to 1,553 internet users. The margin of error on the internet sample is plus or minus 3 percentage points.

As demand for podcasts has grown, so too has the catalog of offerings for users. In November 2006, we reported that Podcast Alley, a popular podcast directory, cataloged over 26,000 podcasts with more than 1 million episodes.1 Now, that number has nearly doubled to over 43,000 podcasts and well over 2 million episodes. The most extensive podcast genre is “technology” with over 4,000 podcasts available on the subject; this genre is followed closely by comedy, religion and spirituality, and business.2

Companies like iTunes regularly prompt users to subscribe to automatic daily downloads of their favorite podcasts.3 “Get podcasts, served fresh daily,” reads an advertisement on the iTunes Store podcast webpage. Instead of getting your morning newspaper delivered to your doorstep, you can get your daily podcast delivered to your iTunes desktop. (For instance, users can subscribe to daily podcasts of newspapers and magazines such as The Wall Street Journal and The Economist.)

College campuses have also served an important role in promoting podcasts. Many colleges and universities now provide podcasts of various lecture series and important speakers on campus. Some professors are experimenting with podcasts in other ways, such as producing their own podcasts or having their students respond to readings and lessons by creating podcasts rather than (or in addition to) traditional papers.

Who is downloading podcasts?

Age differences are more defined with regard to podcast downloading than they were in 2006 when all age groups, except for those 65 and older, were almost equally likely to download podcasts. Now, the dividing line is around the age of 50, with internet users under 50 years old significantly more likely than older users to download podcasts. Fully 23% of those under 50 say they have ever downloaded a podcast and 4% downloaded one yesterday, compared with 13% and 1% of their older counterparts. Since 2006, younger generations have more fully embraced the technology, their percentages nearly doubling since 2006.

Internet users with six or more years of internet experience are significantly more likely than those with less online experience to have ever downloaded a podcast, and they are also more likely to download podcasts on a typical day. 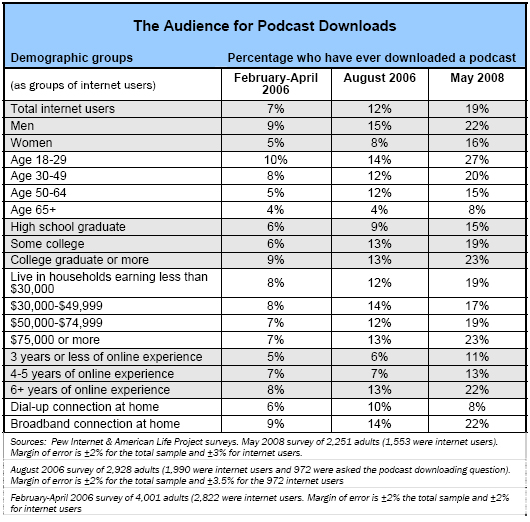 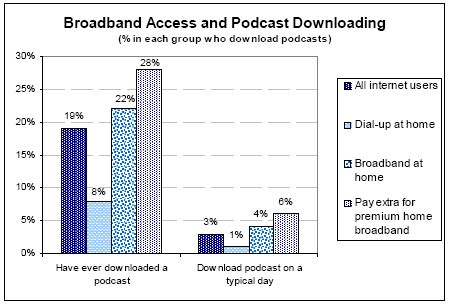 Internet users with broadband and premium broadband access at home are also significantly more likely than the average internet user to have ever downloaded a podcast.

Like podcast downloading, ownership of iPods and MP3 players has also increased since 2006. According to a December 2007 Pew Internet Project survey, 34% of American adults and 43% of internet users report owning an iPod or MP3 player, up from 20% of the total population and 26% of internet users in April 2006.

Next: Quesions and Data
← Prev Page
You are reading page1Page2
Next Page →