The percentage of internet users who use search engines on a typical day has been steadily rising from about one-third of all users in 2002, to a new high of just under one-half (49%). 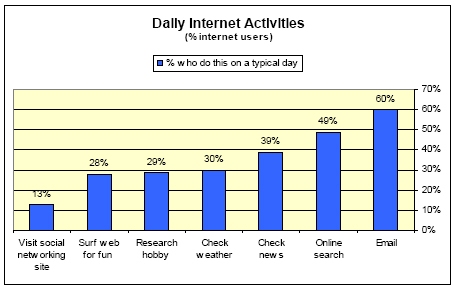 This chart shows the percentage of internet users who did these activities “yesterday,” which in a tracking survey like this one yields a picture of the “typical day” online. For most people the average day includes lots of emails (60% of internet users), general searches (49%), and news reading (39%) if they are online at all (30% of internet users are offline on a typical day).

WHO IS MAKING SEARCH A HABIT?

Here are the numbers:

Education: Internet users with higher levels of education are more likely to use search on a typical day, with those having at least some college education significantly more likely to do so than those with less education. Here are the percentages:

Income: Internet users living in higher-income households are more likely to use search on a typical day, with those having an income higher than $50,000 per year being significantly more likely than those with lower incomes. Here are the percentages:2

Broadband use: Those who use broadband connections at home are significantly more likely than those who use dial-up to have ever tried using search engines at all, by 94% to 80%. They are dramatically more likely to search on a typical day, and this difference persists when other factors, such as age and education, are held constant. These are the percentages according to type of internet connections for those who search on a typical day:

Gender: While just about equal numbers of men (91%) and women (88%) report having ever used search engines at all, men are significantly more likely than women to search on a typical day.

Data collected since 2002 show that men who use the internet have consistently been more likely than women to integrate search into their daily lives. The percentage of online men who search on a typical day has risen steadily from 33% in 2002 to 53% currently. The percentage of women has also risen, increasing from 25% in 2002 to 45%.

Data from past surveys also suggest that men have been more engaged with search in general.3 Online men say they have searched more frequently; they have expressed greater confidence in their search abilities (although women have reported being equally successful in getting satisfying search results). Men have also been more aware than women of some of the controversial issues surrounding search, e.g., the existence of paid v. unpaid search results, and the differences between the two.

WHY ARE MORE INTERNET USERS NOW INTEGRATING SEARCH INTO THEIR ONLINE ACTIVITY?

While the number of internet users who search on a typical day has been steadily rising, this is the second time since the Pew Internet Project began tracking search engine use that we have seen a demonstrable leap in the numbers. The first came in late 2005, when percentage of users searching on a typical day rose from about 30% (in June 2004) to about 40% (in September 2005). We speculated at that time about a few possible reasons behind the increase, pointing out that it was a time of much media coverage and buzz about search engine companies, including the Google IPO.4

Now, the percentage of users searching on a typical day has risen again, from about 40% to 49%. What has changed in the search world that might account for this increase?

One likely reason is that users can now expect to find a high-performing, site-specific search engine on just about every content-rich website that is worth its salt. With a growing mass of web content from blogs, news sites, image and video archives, personal websites, and more, internet users have an option to turn not only to the major search engines, but also to search engines on individual sites, as vehicles to reach the information they are looking for.

Another reason may be related to the fact that fully 55% of American homes have a high-speed internet connection.5 Of all the demographic variables we analyzed, the presence of a home broadband connection had the strongest relationship with a user’s propensity to use a search engine on a typical day. Previous studies have shown that when a user upgrades to home broadband, she is more likely to turn to the internet first when she has a question – and now she is increasingly likely to visit a search engine to find the answer.

Finally, it may be that general search engine sites have become so useful and well tuned that people turn to them for an increasingly broad range of questions.

The Pew Research Center’s Internet & American Life Project explores the impact of the internet on children, families, communities, the work place, schools, health care and civic/political life. The Pew Research Center is a nonprofit “fact tank” that provides information on the issues, attitudes and trends shaping America and the world. The Center and its projects are nonpartisan and take no position on policy issues. Support is provided by The Pew Charitable Trusts.

Americans turn to technology during COVID-19 outbreak, say an outage would be a problem

Most Americans rely on their own research to make big decisions, and that often means online searches