Some reactions to the typology characterize Americans as “uninterested” in ICTs or collectively hostile to cyberspace. The term “Luddites” has appeared in some accounts of our report. The chatter carries the implication: Some people just haven’t gotten the memo about the information age; if they’d only grab a mouse and get in the game, things would fall into place. But users’ attitudes are symptomatic of something other than disinterest in ICTs. They tell us a lot about how far along we are — or aren’t — in the “information society.” Two themes emerge from the typology that explains why many Americans are not tuned into the information age.

Utility – Many technology users simply do not associate ICTs with greater levels of control or productivity in their lives. Some 45% of Americans say information technology gives them less control over their lives or makes no difference. But several typology groups are half again as likely to feel this way, particularly the Indifferents and Light but Satisfied group members. Also expressing these sentiments at high rates are the Connected but Hassled group and Lackluster Veterans.

Behind these sentiments is, in part, a general notion that ICTs don’t contribute to personal productivity. Only one in three Americans who have cell phones or internet access agrees “a lot” with the proposition that ICTs make them more productive — although among several techoriented groups (Omnivores, Connectors, and Productivity Enhancers, roughly one quarter of the population), 74% agree “a lot” about ICTs positive impact on their productivity. But in stark contrast, among four groups, comprising 43% of the general population, just 7% agree “a lot” that ICTs improve their productivity. Those groups are the Lackluster Veterans, Connected but Hassled, Light but Satisfied, and Indifferents. 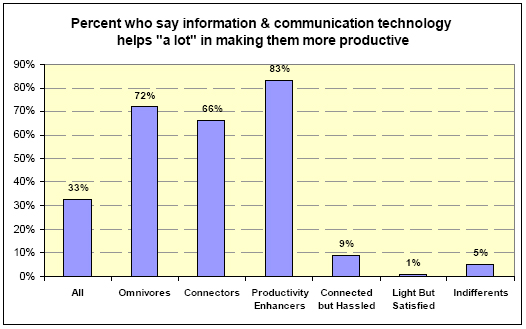 A number of lessons can be drawn from the utility and usability gaps.

First, the technology industry could improve how it designs gadgets, especially for older Americans. Members of the groups most likely to need help with new electronic devices (the Light but Satisfied and Inexperienced Experimenters) are likely to be over age 50. Together those groups make up nearly one-quarter of the adult population.

Second, efforts to convey the social benefits of ICT use to several segments of the population would have substantial payoffs. Three “low-tech” groups, making up about a third of the general population, have made the choice to adopt either the internet or the cell phone. But the frequency of use among these groups is not great, and, with respect to the internet, this has in part to do with connection speed. Only one in seven of these low tech users have broadband at home.

It is easy to imagine a chicken-and-egg dilemma for some in these groups: They don’t yet understand the benefits of the internet because they have slow connection speeds, but the slow connection speeds inhibit their ability to learn about the benefits of the internet. Broadband is only part of the solution for these users; they also need help in learning how to use the technology and support in finding applications that are meaningful to them.

Our past research has shown that those who do not use the internet perceive it as a place with inappropriate content and carrying other risks. Non-users are less aware of worthwhile online applications, such as educational opportunities, health care information, and ways to pursue hobbies.2 Programs where clients receive a large dose of one-on-one attention are likely to have the most promise in breaking through to these groups.

Third, some people will probably remain technological contrarians. These would be the Lackluster Veterans and Connected but Hassled groups — the 18% of the adult population who have put money on the table for ICTs, but either dislike the ease with which they can be contacted as a result or find the gadgets hard to use. Surely, some of these people will find their attitudes about technology evolving. But the juxtaposition, among many users, of a lot of technology assets with strongly negative attitudes about ICTs suggests that some will never grow comfortable or content with modern information appliances and services. And there will always be people — either by choice or due to lack of economic means — who don’t have modern ICTs or even old-fashion information appliances such as a telephone or television.

Finally, it is important to remind ourselves of a truth understood by scholars of technology: It takes a long time for new innovations to diffuse deeply in society. As Paul David has noted,3 it took 30 years for electricity to truly transform modes of production and begin to impact people’s everyday lives. Historian Carlota Perez points to the lengthy phases of technological revolutions, with as many as 30 years passing from invention to the beginning of a stage of widespread installation in society. With the dot-com bust of the beginning of this decade, we are still early in the installation phase of ICTs in society — a stage that may take years to complete.4

A defining characteristic of this phase is likely to be institutional innovation. Businesses will continue to search for the right models and combinations to engage customers. In describing the “digital ecosystem,” the World Economic Forum, anticipating a possible reality 10 years from now, notes that “[n]ot all companies that experimented with new organizational structure have flourished, but all companies that failed to experiment have floundered.”5 In the non-profit sector, the country is dotted with organizations seeking to bring internet access and support to people whose familiarity with ICTs is, at best, nascent.

The findings from the typology suggest that these experiments in the private and non-profit sectors will be appreciated, are likely to find large audiences for a considerable amount of time, and could have real payoffs to society and the economy if they are successful.