34% of internet users have logged on with a wireless internet connection either at home, at work, or someplace else 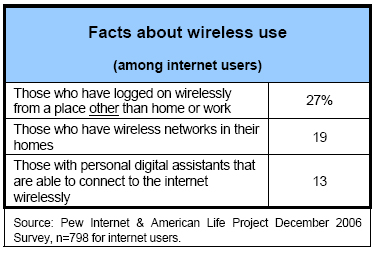 Users of wireless access show deeper engagement with cyberspace – at least when focusing on two basic online activities, email and news. Among the 34% of internet users who have gone online wirelessly:

The differences between wireless and home broadband users are statistically significant and notable because most wireless users (80%) have broadband connections at home. The findings suggest that the “relentless connectivity” afforded by wireless access represents a different quality in online behavior.1 It is possible – even likely – that lifestyle circumstances such as one’s job may require lots of email connectivity and associated wireless access. But the boundaries between checking email on a portable device for work or personal purposes can be very blurry; having such work-driven access may foster greater frequency of personal emailing or other kinds of online activities.

When asked about the places they connect to the internet by wireless means:

Most wireless surfers log on wirelessly from more than just one of the places asked about. In fact, 25% of internet users have gone online wirelessly from two of the three places; put differently, three-quarters of all those who have logged onto the internet using a wireless network have done this from more than one of the types of places queried.

Laptop computers: Four in ten (39%) internet users have laptop computers and of these laptop users, 80% say their laptops can connect to the internet on a wireless network. Most of the time, those with wireless enabled laptops connect to a wireless network at home, although most also have logged on from someplace other than work or home. Specifically, among laptop users whose machines are capable of connecting to the internet wirelessly:

More often than not, those with laptops and home wireless networks take advantage of in-house mobility; three-quarters of these users say they move their laptop around to different parts of the house

Personal digital assistants (PDAs): One in eight (13%) internet users have a PDA that can connect to the internet using a wireless network. Of these, most (82%) have used it to connect at home, work, or someplace other than home or work. Specifically:

This latest  measure of wireless connectivity comes from a December 2006 survey that frames wireless access in terms of devices (i.e., a laptop, a cell phone, a wireless-enabled personal digital assistant) and place (i.e,, the home, workplace, or someplace other than home or work). Looking at wireless access in this expansive way yields the finding that one-third of all adult American internet users (34%) have logged onto the internet by wireless means using one of the devices listed above.

In the past, the Pew Internet Project has asked the following question to assess the extent of wireless access to cyberspace: “Do you ever log onto the internet using a wireless device?” That straightforward question showed, in March 2006, that 30% of internet users said they had done this. This older question, however, does not capture the different places people take advantage of wireless access, or the devices they use to connect. In February 2004, 22% of internet users said yes to the older question, so there is clearly some growth in wireless connectivity in recent years.

Who are the wireless users?

As to devices for accessing the internet wirelessly, among internet users under 30:

Still, the 30-to-49 age range also shows a predilection to use wireless access, particularly with respect to devices that are often adjuncts to people’s jobs. About one in five (18%) internet users in this age group have gone online using a wireless connection at work, and 15% have a PDA that connects wirelessly. As to other types of wireless use, one third (32%) of internet users in the 30-49 age range have logged on wirelessly from any location and 24% have connected to the internet by wireless means from a place other than home or work.

The table below offers a fuller demographic portrait of internet users who have used a wireless connection to go online compared to online users who have not done this. 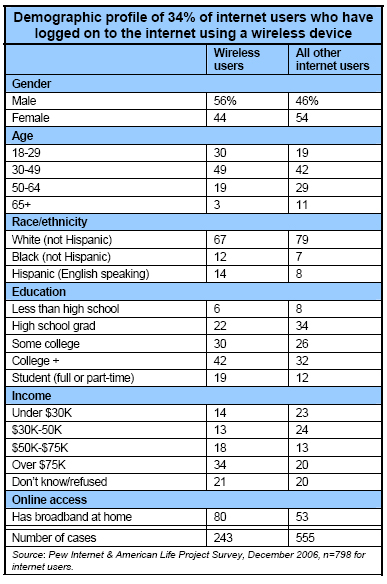 About the Pew Internet Project

The Pew Internet & American Life Project is a non-partisan, non-profit initiative of the Pew Research Center that does research on the social impact of the internet. It is funded by the Pew Charitable Trusts. The Projects takes no position on policy issues.

Next: Methodology and Questions
← Prev Page
You are reading page1Page2
Next Page →

28% of American adults are wireless ready
Mobile Access to Data and Information
The Rise of Wireless Connectivity and PIP's Latest Findings
Home Broadband 2008
The Broadband Difference: How online behavior changes with high-speed Internet connections
Quiz: Are you a Core Conservative? A Solid Liberal? Or somewhere in between?
More Americans now say academic concerns should be a top factor in deciding to reopen K-12 schools
Defining generations: Where Millennials end and Generation Z begins
How the Coronavirus Outbreak Has – and Hasn’t – Changed the Way Americans Work
Views on Race in America