Way back in 1994, when few Americans had even heard of the internet, most people still walked to their bank’s nearest branch to do whatever check cashing or bill paying they couldn’t do at the corner store or by mail. When a survey by the Pew Center for the People & the Press asked the principal bill-payer in each household, “Do you ever do ‘electronic banking’ from home—that is, use a computer or the telephone to pay bills or move money from one account to another?” fewer than one in ten (9%) among this group said yes, they had done such a transaction. By 1995, that figure had risen to 13% of bill-payers. In 1998, when the Pew Research Center switched to asking all internet users if they ever paid bills or banked online, 13% of this larger group, or about 10 million American adults, said yes. 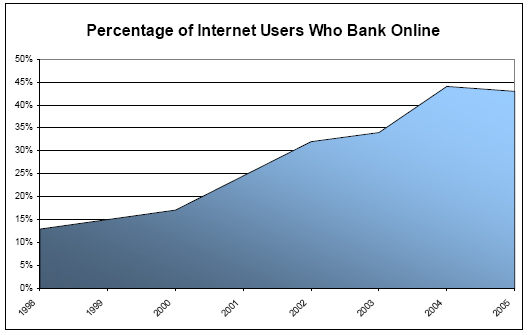 By 2000, when the Pew Internet & American Life Project fielded our first survey, the proportion of internet users who said they ever did any banking online had risen to 17% or about 16 million Americans. Over the next few years, internet users ramped up a range of online financial and transactional activities, trusting more and more of their personal financial information to the Web. Among categories of activities, online banking and online auctions grew the most rapidly, especially among men, home broadband users, and internet users under the age of 50.1

Other forms of financial housework joined banking as popular online activities. In January 2005, 38% of internet users reported paying bills online. In December of that year a study fielded by Harris Interactive found that 35% of bills were paid online, up from 25% the year before.2 By comparison, 37.5% of bills are paid by paper check and 27.5% are paid some other way, such as in cash or by debit card.3

Ever larger numbers of internet users also turn to the web to seek financial advice and information. While the proportion of internet users who say they go online to get financial information such as stock quotes or interest rates has stayed constant at 44% since we began polling in 2000, the internet population base has risen steadily.4 By April 2006, according to comScore Media Metrix, four websites that combined money-management content with financial services ranked among the 20 most popular in the Business/Finance category: AOL Money & Finance, MSN Money, Yahoo! Finance, and CNN Money.5 In addition, a group of online magazines and websites, such as Motley Fool, contribute content to the larger information providers both print and online.

Financial sites are also hopping on the social networking bandwagon. A recent conference sponsored by Forrester Research focused on the online shift in retail financial services. Companies such as Yahoo! and Google discussed the benefits of creating online social networks for exchanging advice and pairing lenders with borrowers.6

One reason for this gap is that a few huge internet-only banks are skewing the average. For example, ING Direct, which was established in 2000, already has 4 million customers and $59 billion in assets.10 Another reason for the difference is that many banks and thrifts draw from a local customer base, not a national one. For example, Adams County Building and Loan Company in West Union, Ohio, was established in 1907 and currently has $24 million in assets.11 The two banks simply serve different customers and different needs.

Moreover, while the percentage of internet users banking online is holding steady, internet users are increasing the frequency of their visits to banking and other financial websites.  According to comScore Media Metrix, the number of unique visitors to Business/Finance websites grew by 9% between April 2005 and April 2006.12 The top five sites in that category for April 2006 were Bank of America, PayPal, JPMorgan Chase Property, AOL Money & Finance, and Capital One. What was the sixth most popular finance site in April? IRS.gov, of course.