On any given day, about 40 million internet users go online just for fun

The internet is increasingly a place where Americans just hang out.

In aggregate figures, this development is striking because it represents a significant increase from the number of people who went online just to browse for fun on a typical day at the end of 2004. In a survey in late November 2004, about 25 million people went online on any given day just to browse for fun. In the Pew Internet Project survey in December, 2005, that number had risen to about 40 million people.

The Project’s December survey asked about Web surfing in two ways. We asked all internet users: “Do you ever go online for no particular reason, just for fun or to pass the time?”  Two-thirds of internet users, 66%, answered “yes” to this question, a percentage that has held about steady since we began asking the question in 2000.

We also asked internet users if they went online “yesterday,” referring to the day before the respondent was interviewed. Respondents who said “yes” were then asked, “Did you go online for no particular reason, just for fun or to pass the time yesterday?” In this case, 30% answered “yes.” We interpret the positive responses to indicate that 30% of internet users were surfing the Web for fun on an average day in December 2005. This figure shows striking growth compared to previous surveys when we asked the same questions.

Who surfs the Web for fun

In the earliest days of the Web, young, white men were the most likely people to go online just to surf around with no particular purpose or destination in mind. It is still the case that being young and male are predictors of Web surfing on a typical day. But this kind of idle browsing has a broader appeal now, cutting through all races, income groups, levels of educational accomplishment. Here are some of the factors: 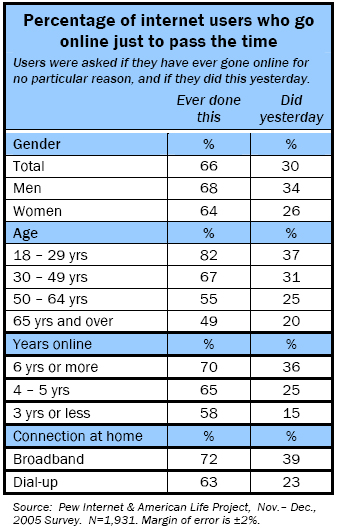 Why the increase now; the beginning of a trend?

This new appeal of idle Web surfing on a typical day takes places in the context of at least two relevant ongoing changes in the internet world: increasing numbers of people who have broadband access in their homes and a growing body of content and applications on the Web. Broadband connections certainly make Web surfing easier, faster, and more pleasant an experience. More Web content and more applications means a greater variety of experiences for people with different interests to enjoy.

Both home broadband penetration rates and amount of Web content are likely to continue to grow. Perhaps the rise in either broadband or Web content has crossed a kind of threshold that stimulated a rise in everyday Web surfing. Perhaps, as these two factors likely continue to rise, this moment marks the beginning of a trend of increasing everyday Web surfing. Or perhaps the rise in Web surfing on a given day marks an uptick that has hit an upper limit.

Penetration rates for home broadband access have risen from about 3% in 2000 to 36% at the end of 2005. The rise of Web surfing for no particular purpose on a typical day has remained steady at about 20% until the last year, when it took a sudden upswing, and only then did it match the rise of home broadband access from one-quarter to more one-third of American households. 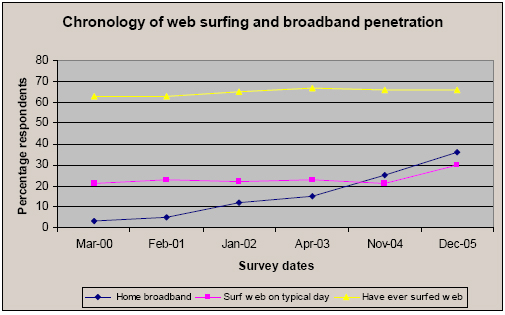 There’s no doubt that the amount of content and the variety of things to do on the Web have grown and continue to grow dramatically. Here are some examples:

What Web surfing on a typical day means

Users have already folded purposeful Web activities into their everyday lives — communicating, gathering information or looking for answers. Now, they have added Web surfing — going online without any particular purpose to that list. Many people have described the internet in terms of different purposeful places:  a library, or a shopping mall, or a post office. Now we can add “destination resort” – a place to go just to have fun or pass the time — to that list.

The Pew Internet & American Life Project is a non-profit, non-partisan research organization that is funded by the Pew Charitable Trusts to examine the social impact of the internet.

Next: Survey questions and methodology
← Prev Page
You are reading page1Page2
Next Page →

Surfing for Fun
On any given day, about 40 million internet users go online just for fun
Survey questions and methodology