Wired seniors want to keep up to date, whether that means emailing their children or staying current with the news.

Communication tops the agenda for wired seniors – but they generally stick to email.

Wired seniors are likely to describe their health as “fair” or “poor” and they are more likely than other age groups to be living with a disability or chronic illness.8 Sixty-six percent of wired seniors have looked for health or medical information online – the same percent as the general Internet population. However, this represents a more than 25% increase since 2000 in the number of online seniors who had performed health searches.

Fully 53% of wired seniors have gone to Web sites that provide information or support for a specific medical condition or personal situation, compared to 54% of the general Internet population.

When it comes to specific types of health information, both wired seniors and younger users are pretty equally interested in details about a specific disease, treatment, or drug. (See table on next page for more details.) Seniors and their loved ones would do well to keep up to date since a recent RAND Health study found that seniors got the recommended care for age-related conditions only one-third of the time.9

Wired seniors truly surpass younger users in pursuit of only one health-related topic:  Medicare and Medicaid information. Indeed, the Center for Medicare Education recently issued a policy brief to help senior educators guide seniors through the thicket of new options.10

Why don’t online seniors seek health information on the Web? The main reason, according to their answers in our December 2002 survey, is that they are satisfied with the health and medical information they get elsewhere. Most did not fret about untrustworthy material online. Several said they didn’t have any health concerns at that point in their lives. And a few said it is because they would not know where to start looking online. 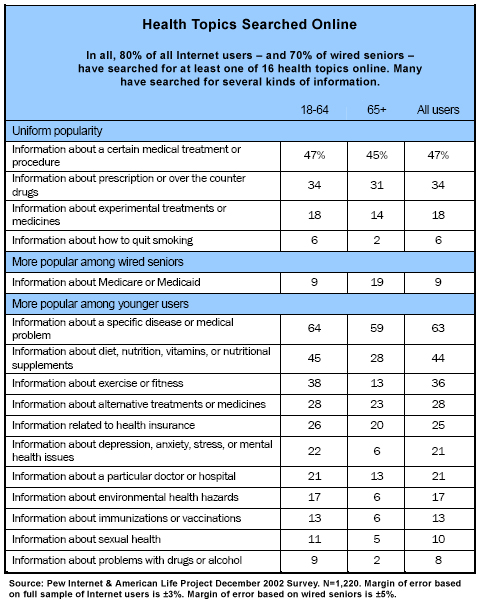 Wired seniors are doing more on the Internet, but they are still less likely than younger Internet users to try many online activities.

There have been big increases since 2000 in the number of online seniors doing several key activities on the Net. It is important to stress, though, that even with these high growth rates, it is usually the case that online seniors have done these online activities at lower rates that younger Internet users.

A rundown of the main activities we measure is on page 10 of this report. Here are some highlights of activities where there have been significant increases:

Russell E. Morgan, president of the SPRY (Setting Priorities for Retirement Years) Foundation,11 says, “Seniors are more suspicious. They hear about identity fraud and credit card theft online and think, ‘Why take the chance?’” However, Morgan points out that transportation and managing one’s own finances are the two issues that worry seniors most. He adds, “The more seniors can track their finances, the less likely they will get into trouble later on.”

Wired seniors are essentially equal to younger users when it comes to researching financial information, such as stock quotes or mortgage interest rates.  Forty-one percent of wired seniors have done this type of research, compared to 44% of all users. Fifteen percent of wired seniors buy or sell stocks, mutual funds, or bonds online, compared to 13% of the general Internet population. These numbers have not changed significantly between 2000 and 2004 – wired seniors and younger users have maintained, but not increased, their interest in following the stock market online.

Thomas S. Tullis, senior vice president of human interface design at Fidelity Investments, observes that while seniors are increasingly willing to use the Web for financial research, they are still more conservative than younger users when it comes to making trades.

Games, hobbies, and other diversions attract a smaller group of wired seniors.

Wired seniors are among the least likely groups to download music, video, or game files, but they are among the most likely to play a game online.  Thirty-five percent of Internet users age 65 and older have played a game online, compared to 39% of all users.

There is one hobby activity that elders clearly dominate – 36% of wired seniors have researched their family’s history or genealogy, compared to 24% of all users. 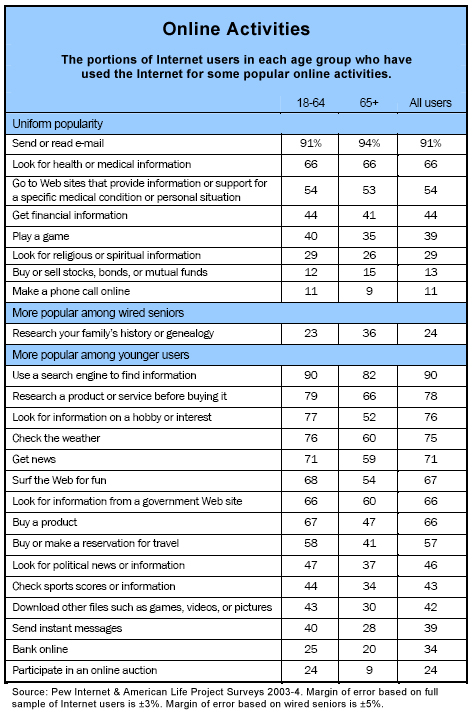 Next: Part 3. Implications for the future
← Prev Page
Page1Page2Page3You are reading page4Page5Page6
Next Page →

Older Americans and the Internet Acknowledgements Part 1. 22% of Americans 65 and older use the Internet
Part 2. Familiar concerns drive wired seniors’ online research
Wired seniors want to keep up to date, whether that means emailing their children or staying current with the news.Health information is popular among wired seniors.Wired seniors are doing more on the Internet, but they are still less likely than younger Internet users to try many online activities.Games, hobbies, and other diversions attract a smaller group of wired seniors.
Part 3. Implications for the future Methodology