Nearly a quarter of online Americans use the Internet at places besides home or work; More than half of Internet users go online in multiple places.

As use of the Internet becomes more appealing and more essential to Americans, a growing number are using multiple locations to go online. And significant numbers are moving beyond the tradition places of access – home and work. The Pew Internet & American Life Project has found that 23% of adult U.S. Internet users have gone online from a place other than home or work. That is close to 30 million people.

On any given day more than 4 million Americans are accessing the Internet from some place other than home or work.

Those who use the Internet in some place other than home or work fall into two main camps. The first camp consists of the online Americans who seem to go online wherever they are. These users often have access at home and at work and they are anxious to have access from other places as well. Many of them are young – under the age of 30 – and avid Internet users. On a typical day, more than half the people accessing the Internet from a “third place” are between ages 18-24. Nearly half of students (48%) have accessed the Internet from a “third place.” They are the anywhere, anytime users of the Internet.

In the second camp are Internet users who are relatively poor and do not have high levels of education. Many have access at work, some have access at home, and a portion of them depend on a place other than home or work for their Internet access. Those who depend on “third places” make up only 3% of the entire U.S. Internet population, but they are disproportionately likely to live in households earning less than $30,000, to live in rural areas, and to be newcomers to the online world. They are fairly infrequent users of the Internet who often use libraries and friends’ homes as their access points.

Some 54% of Internet users say they go online from more than one place.

These findings suggest that use of the Internet has spread well beyond home and work. The importance of the Internet in the lives of professionals who travel often, students, young adults, and people with a lot of online experience has grown to the point that for many it is a technology that moves with them wherever they go and which they access whenever they feel the need. On any given day, 27% of those who use the Internet go online in at least two places.

At the same time, a portion of Internet users depend completely on these other places because these locales are the exclusive providers of their online connection. They are not avid users of the Net, but they have entered the online world at the level that is available to them.

Further details: Where and who

The study of “place” and the Internet is nothing new.  There are bookshelves, virtual and physical, stacked high with research that examines whether online environments are worthy of being termed a “place.”  In this report, the Pew Internet & American Life Project examines a less researched, but equally important issue regarding the concept of “place” and the Internet.  Utilizing phone surveys conducted between May 2002 and December 2003, the Project investigated the “other places” beyond home and work where Americans log on. The principal analysis is built around results from the surveys fielded between May and October 2002.

In comparison, our surveys show that 51% of all online users access the Net while at work. Some 40% of those connecting to the Internet on a typical day log on from work.

Furthermore, 23% of Internet users have accessed the Net from a location other than their home or place of work. Among these away-from-home, away-from-work users, the top “other” locations for Internet access are school (27%), friend/neighbor’s house (26%), at a library (26%), and a relative’s house (9%). In addition, 4% have logged on from some place while traveling, 3% have logged on at hotels, 2% have logged on at cyber cafés, and small fractions have logged on at community centers and houses of worship. 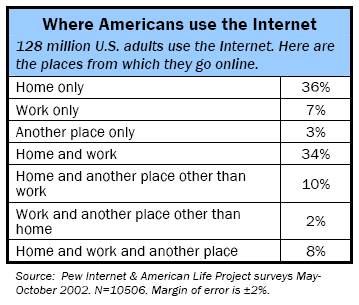 On a typical day on the Net, more than four million Americans are using connections that are neither home-based nor work-based. On that average day, more than half those who are using another access point besides home or work are going online at school; about a fifth (19%) are using friends’ homes, and 10% are using libraries.

Who uses “other places”: Young adults

In short, young adult Americans are heavy “other-location” users, accounting for 32% of all other location use, and more than half (54%) of those who log on from a “third place” during a typical day. Their number one “other place” is, not surprisingly, school. Some 53% of those “other place” users between the ages of 18-24 report having gone online from school.

Older Americans are the least likely to go online from other places.  Only 10% of Internet users age 65 years and older have ever gone online from a place other than their home.

The Pew Internet & American Life Project finds of Internet users with annual household incomes of less than $30,000, 28% have logged on from a location other than their home or place or work. School (31%), libraries (30%), and friends’/neighbors’ houses (26%) are the top “other” locations identified by this group. On a typical day, 71% of those from low-income homes accessing the Internet from a “third place” do so at a school, with a library and a friend’s/neighbor’s house each accounting for 12% of other location usage.

Those who live in high-income households (those with $75,000 and above) account for 33% of “other-location” users. Many have gone online at school. Yet, some are probably road warriors, or professionals who travel a lot: 14% report they have logged on at a hotel.

Some 54% of Internet users who have logged on from a place other than their home or place of work are male. A friend’s/neighbor’s house (28%) ranks as the number one other place for men, compared with a library (30%) for women.  School is the second-most reported access point for the men who go online from “third places” (27%) and a library comes in third at 23%.  For the women who use “third places,” connecting to the Net from a library is followed by a school (27%) and a friend’s/neighbor’s house (25%).