Users in the five states in the region (Iowa, Kansas, Missouri, Nebraska, Oklahoma) stand out for a number of reasons:

There is a growing gap between Internet use in the region and the rest of the nation.

Internet users in the Midwest are generally well educated and middle income.

The user population of the Lower Midwest is predominantly white, but the region also has a larger share of African-American users compared with its neighbors.

More women than men in the region are online.

Unlike almost every other region in the country, the Lower Midwest has a higher proportion of female users than male users. Nationally, the Internet population is split 50-50; in the Lower Midwest, however, 52% of users are women and 48% are men. Only the Mid-Atlantic region (54%) and the Mountain States (53%) have larger proportions of women users.

The region’s Internet users mirror national patterns for age, except for the large proportion of seniors.

Lower Midwesterners do have some clear likes and dislikes compared with users elsewhere.

For the most part, Lower Midwesterners who log on to the Internet enjoy the same online activities such as email or looking for health information as their peers in other parts of the country. However, gathering news online is a favorite activity in the Lower Midwest, something that 65% of Web users have done at one time or another. Nationally, about 60% of users have done this, and the proportion of Lower Midwestern Internet news consumers is one of the largest in the country. Other regions with high levels of online news usage are the Mid-Atlantic (61%), the National Capital region (62%), the Border States (64%) and the South (63%). Interestingly, looking for news online in the Lower Midwest ranks much higher than in the neighboring Upper Midwest, where only 53% of Internet users have done this.

Lower Midwesterners are also relatively wary about seeking financial information via the Internet. Only 31% of users there have done so, in contrast to the 38% of users who have done so nationally. Once again, the Lower Midwest has one of the lowest rates of Internet use for this purpose of any region in the country.

Users in the region are slightly more likely to log on during an average day. There is high use of high-speed cable modems at home, but Lower Midwesterners are the least likely to log on from home.

On a typical day, about 58% of Internet users in the Lower Midwest will log on to the Web. This rate is slightly higher than the national average of 57%. Compared with other regions, this rate of daily access is somewhat high and approaches rates in such highly wired regions as the National Capital region (59%) and New England (60%). The region with the highest daily access is the Pacific Northwest, where 63% of users log on to the Web on a typical day. The lowest is the South (51%).

There is high use of high-speed cable modems at home.

In the Lower Midwest, a surprisingly large proportion of home-based Internet users (12%) access the Internet via high-speed cable modems. This puts the region second behind New England (16%) and tied with the Mid-Atlantic (12%) in this category; nationally, about 10% of users have access to cable modems. About 80% of home Internet users in the Midwest log on to the Net via a standard dial-up connection, and 4% have access to a DSL line. Nationally, about 82% of users use a dial-up connection, and about 5% use a DSL connection.

But Lower Midwesterners are the least likely to log on from home.

On an average day, 73% of those Lower Midwestern Internet users who go online will access the Web from home; nationally, about 76% of users will do so. This daily rate of home access, like the overall home access rate mentioned above, places the region near the bottom. The only region with a lower rate of daily home access is the National Capitol region, where 71% of users will log on from the home. By comparison, 84% of home users in the Pacific Northwest will use the Internet from home on a typical day. About 39% of Lower Midwesterners logging on during a typical day will access the Internet at work, just under the national average of 40%.

About 62% of Lower Midwestern Internet users say they log on to the Web at least once a day, and 36% use the Internet several times a day. These proportions are just about the same as for the national Internet population. The National Capital region has the highest daily usage; 67% of users there report logging on at least once a week, and 45% log on several times a day. In the region with the lowest rate of daily usage, the South, about 60% of users log on at least once a day, and 34% go online more than once. At the same time, 17% of users in the Lower Midwest use the Internet three to five times a week, about 12% go online once or twice a week, and 6% log on less than once a week.

Lower Midwesterners are lukewarm about the impact of the Internet on their lives. In March 2000, users were asked several questions about the extent to which the Internet had helped them improve some aspect of their daily life – shopping, getting health information, managing their finances, connecting with family and friends, and learning new things.

There was significant growth in the proportion of adults using the Internet in the region between 2000 and 2001.

Between 2000 and 2001, some online activities attracted more Lower Midwesterners and some activities were less favored. They were more likely to have sought news online, to have looked for health information, and to have turned to the Internet to answer a question in 2001 than they were in 2000. At the same time, they became less likely to use email, do job research on the Internet, or buy a product online. And they were a lot less likely to have sought financial information on the Web.

Usage patterns in the Lower Midwest remained stable between 2000 and 2001. There were solid increases in the percentages of users logging on to the Net from both the home and from the workplace, with a slightly larger increase at home. However, there was a slight decrease in the proportion of home users who logged on from home on an average day.

Some popular Web sites in the Lower Midwest

The table below lists the top five Web sites in St. Louis in April 2003. Those sites are also the top five in the nation and they do not vary much region-by-region. In addition, the table highlights several regional sites that are in the top 25 most heavily used sites in the region during that month. A full listing of the top 25 sites in the region can be found in the spreadsheet that is available here: https://www.pewresearch.org/internet/releases/release.asp?id=66 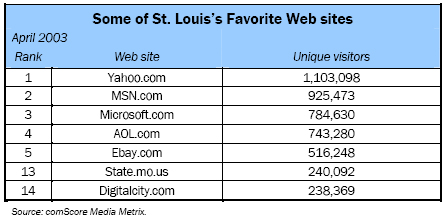