The struggle to enforce copyright laws in the digital age continues to be an uphill battle for content owners. Data gathered from Pew Internet & American Life Project surveys fielded during March – May of 2003 show that a striking 67% of Internet users who download music say they do not care about whether the music they have downloaded is copyrighted. A little over a quarter of these music downloaders – 27% – say they do care, and 6% said they don’t have a position or know enough about the issue.

Americans’ attitude towards copyrighted material online has remained dismissive, even amidst a torrent of media coverage and legal cases aimed at educating the public about the threat file-sharing poses to the intellectual property industries. Consumers argue, in some news reports, that downloading simply supplements their regular music purchasing habits or serves as a form of sampling new music. Some consumers have also been quoted as saying that the prices of CDs and DVDs are too high with too little profit going to the artists, while others say the music they want simply isn’t available offline because it is out-of-print or otherwise hard to find. Still others say that they are entitled to make “fair use” of the music they purchase by sharing it with friends over these networks.

Whatever the argument, it is clear that millions of Americans have changed the way they find and listen to music. When we last issued a report on the growing popularity of downloading music online in 2001, the legal battle to protect copyright was focused on the efforts of the Recording Industry Association of America (RIAA) to challenge large file-sharing networks like Napster. Though the RIAA won its case against Napster and effectively forced the site to shut down in 2001, a myriad of decentralized file-sharing services emerged and millions of Internet users simply migrated to the new systems. In all, the recording industry attributes a 25% drop in CD sales since 1999 to online piracy. However, some have disputed this notion, citing a slumping economy, rising CD prices and fewer titles being released.

This year, the RIAA lost an important case against the makers of the Morpheus and Grokster peer-to-peer software when a federal judge in Los Angeles ruled that the file-sharing software itself was legal, even if it was being used to distribute illegal copies of copyrighted music and movies. The court ruling prompted a shift in the RIAA’s tactics from suing file-sharing companies to targeting individuals who allegedly use file-sharing software to download and share copyrighted material.

In January 2003, the RIAA won a landmark case against Verizon, forcing the company, under the provisions of the 1998 Digital Millennium Copyright Act, to release the names of subscribers who were suspected of copyright infringement. Verizon appealed the ruling, citing customer privacy concerns and the lack of court oversight required for the subpoena process. However, the ruling was ultimately upheld and paved the way for the recording industry and other copyright holders to begin suing individuals believed to be infringing on copyright protections.

As of July 28, 2003, the RIAA has sent out close to 1,000 subpoenas requesting information from Internet Service Providers in order to identify and contact customers who are potential copyright infringers. The lobbying arm of the recording industry has said it would focus its subpoena campaign on users who were allowing a “substantial” number of files to be shared from their computers. However, some users claim they are unaware that they are making their files available to others because programs like KaZaA include default settings that automatically allow sharing with others on the network. Other users say they have assumed that because Napster was shut down, any file-sharing service that remained in operation must only permit legitimate or “fair” uses. However, while Napster was unsuccessful in using a fair use defense in its case, it remains to be seen how successful this line of defense will be for the cases involving individual Internet users.

In addition to the lawsuits being filed by the RIAA, two pieces of federal legislation were introduced that are intended to curb the illegal use of file-sharing networks. The Piracy Deterrence and Education Act of 2003 (HR 2517), sponsored by Lamar Smith (R-Texas), proposes warning, education, and enforcement programs that would require the involvement of the Federal Bureau of Investigation and the Department of Justice. The Author, Consumer, and Computer Owner Protection and Security Act (HR 2752), proposed jointly by John Conyers (D-Michigan) and Howard Berman (D-California), would impose criminal penalties of up to five years in prison for online copyright infringement. Additionally, it proposes an allocation of $15 million to the Department of Justice to enhance domestic and international enforcement of copyright laws.

In a Pew Internet & American Life Survey fielded between March and May of 2003, the Project found that 29% of Internet users have “downloaded music files to their computer so they can play them any time they want,” and about 4 percent of Internet users do so on an average day.

This 29% is the same portion of Internet users who were downloading music files when we released our “Music Downloading Deluge” report in April 2001, but represents a larger number of people due to the overall growth of the online population that occurred between 2001 and 2003. In April 2001, we reported that the downloading population consisted of roughly 30 million American adults, but our 2003 data shows that number has risen to 35 million.

File-sharers are almost as abundant as downloaders, with considerable overlap between the groups

Some 21% of current Internet users say they share files – they allow others to download files, like audio or video files, from their computers.1 But the vast majority of online Americans, 78%, do not share files online with others.

Some users choose to make files available for download by posting the audio files online themselves. This might consist of a band posting a song online for promotional purposes or a fan posting a song to share with friends. In all, 5% of all Internet users say they have posted audio files to the Internet themselves.

Not surprisingly, there is considerable overlap between the downloading and sharing populations. Within the downloading population, some 42% of those who download files say they also share files with others. Peer-to-peer file-sharing networks are built upon the premise that users will both give and take copies of files from the collective pot. However, it is likely that users will be more conservative about sharing music files in the near future for fear of legal ramifications. What is less predictable is whether users will then buy the music they are not able to access online for free.

Who is doing the downloading?

Though the size of the downloading population has grown in two years, its basic demographic composition has not changed much. Male Internet users are more likely to be downloaders than women by a modest margin (32% vs. 26%). African-Americans and Hispanics are also more devoted downloaders than their white counterparts, with 37% of online African-Americans, and 35% of online Hispanics downloading music files, compared to 28% of online whites. 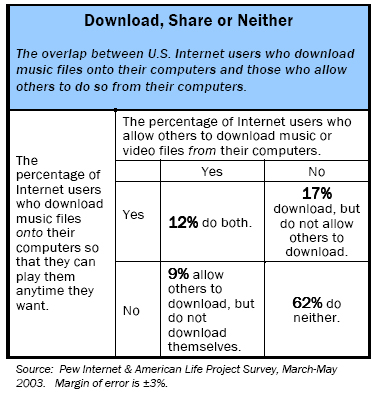 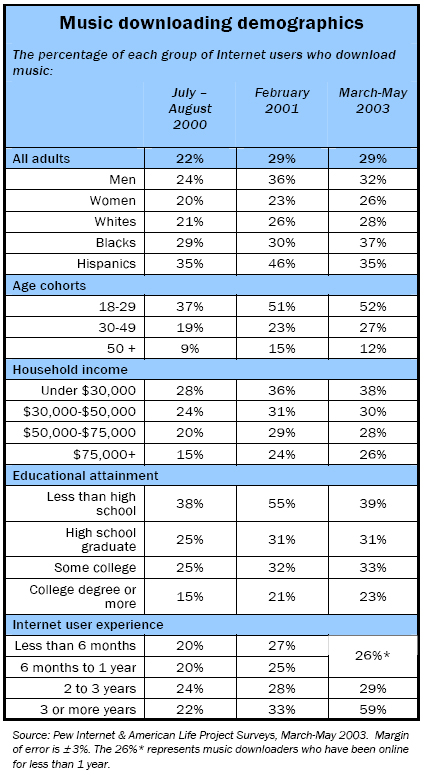 Pew Internet findings show that the majority of those who download music are not concerned about the copyright status of those music files. However, some groups express more concern than others.

The differences between men and women, blacks, whites and Hispanics and between income groups are not statistically significant, when it comes to copyright concerns.

Who is sharing files online?

As with those who download, those who take the next step and share files are also unlikely to express concern about the copyright of the files they share with others over the Internet.

Students, both full-time and part-time, who share files, say they are not concerned about the copyright status of the files they share with others online. Eighty percent of full-time students and almost three-quarters of part-time students say they do not care whether the files they share are copyrighted or not. Fifty-nine percent of non-students say the same.

There are no significant differences in copyright beliefs among file-sharers when it comes to their level of online experience, their frequency of use of the Internet, or whether they have a high-speed connection or not.

This report is based on the findings of a daily tracking survey on Americans’ use of the Internet. The results in this report are based on data from telephone interviews conducted by Princeton Survey Research Associates between March 12-19 and April 29-May 20, 2003, among a sample of 2,515 adults, 18 and older.  For results based on the total sample, one can say with 95% confidence that the error attributable to sampling and other random effects is plus or minus 3 percentage points.  For results based Internet users (n=1,555), the margin of sampling error is plus or minus 3 percentage points.  In addition to sampling error, question wording and practical difficulties in conducting telephone surveys may introduce some error or bias into the findings of opinion polls. The final response rate for this survey is 32.7 percent

The sample for this survey is a random digit sample of telephone numbers selected from telephone exchanges in the continental United States. The random digit aspect of the sample is used to avoid listing bias and provides representation of both listed and unlisted numbers (including not-yet-listed numbers). The design of the sample achieves this representation by random generation of the last two digits of telephone numbers selected on the basis of their area code, telephone exchange, and bank number.

Non-response in telephone interviews produces some known biases in survey-derived estimates because participation tends to vary for different subgroups of the population, and these subgroups are likely to vary also on questions of substantive interest. In order to compensate for these known biases, the sample data are weighted in analysis. The weights are derived using an iterative technique that simultaneously balances the distribution of all weighting parameters.

The Pew Internet & American Life Project is a non-profit initiative, fully-funded by The Pew Charitable Trusts.  The Project creates original research that explores the impact of the Internet on children, families, communities, health care, schools, the work place, and civic/political life. The Pew Internet & American Life Project aims to be an authoritative source for timely information on the Internet’s growth and societal impact, through impartial research. For more information, please visit our website: https://www.pewresearch.org/internet/