There was 50% growth in home broadband adoption in the past year, but the torrid growth pace will likely slow.

High-speed Internet adoption at home continues to rise sharply in the United States, increasing by 50% from March 2002 to March 2003.1 This good news about the uptake of broadband Internet service to the home is tempered by two factors suggesting growth may be moderating.  First, fewer experienced dial-up Internet users – the prime candidates to upgrade to high-speed connections – now say they want broadband than a year ago.  Second, dial-up users who are most likely to say they would like to get broadband at home are the ones who say it is not available in their neighborhood.

Nonetheless, about 13% of the dial-up Internet population seems ripe to migrate to broadband service.  These users have been online for 6 or more years and say they are interested in moving to broadband.  And – importantly – they have online behavioral patterns similar to existing broadband users.  That is, they are already active information producers and gatherers, which are distinctive characteristics of Internet users who today have broadband at home. 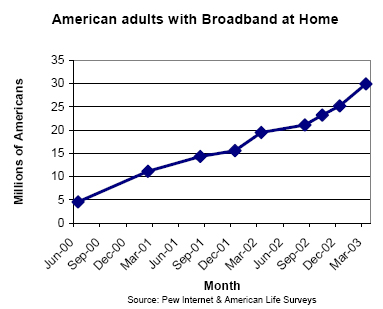 Even with the fast pace of broadband adoption, there are concerns that it may not be fast enough, particularly in contrast to countries such as South Korea and Canada. In those countries, half of all households have high-speed connections.  Although about a third of home Internet users in America have signed up for broadband, many wonder why more haven’t done so.  In our surveys, it is difficult to probe why some Internet user do not choose to get broadband connections. After all, they have chosen not to buy something about which they may know very little.  We do, however, ask whether dial-up users want broadband and whether Internet users know whether broadband service is offered to their neighborhood.

According to a survey we conducted from October 7, 2002 through October 27, 2002 of 1,677 Americans, 71% say that they live in an area where broadband service is available; 12% say they cannot get broadband service at home, with the remainder (17%) saying they don’t know whether service is available or not.  People who report they cannot get broadband are twice as likely to live in rural areas as the general population.  But even with the widespread availability of broadband, most dial-up users say they are content to stick with their dial-up modem. Nearly three in five (57%) of dial-up users say they have no interest in having a faster connection at home, while 38% say they would like to upgrade to broadband.  The numbers reverse, however, for those who say broadband is not available in their area.  Among these people, 61% say they would like to have a faster connection with 35% saying they’re not interested in an upgrade.2 It seems that those who want broadband the most are those who can’t get it.

The next broadband users: Their current online behavior and their work at home are key

Experienced dial-up users who want to move to broadband – about 13% of the dial-up Internet population – should have a fairly quick migration to the home high-speed connection.  One reason to expect rapid adoption of broadband among these experienced and enthusiastic dial-up users is their online behavior.  In our June 2002 report “The Broadband Difference,” we found that broadband users are extraordinarily active Internet users, particularly when it comes to information gathering, multimedia use, and content creation.3 The differences were especially striking when it came to daily Internet use; for any given online activity, broadband users were more likely to do it on a given day than dial-up users.

As the following charts show, the differences between dial-up and broadband users persist in our October 2002 data, but they are much smaller for dial-up users with 6 or more years of online experience who say they want broadband.  This is especially true for information gathering activities.  Two in five (41%) of broadband users get news on the Internet on a typical day compared with 35% of experienced dial-up users who want broadband. 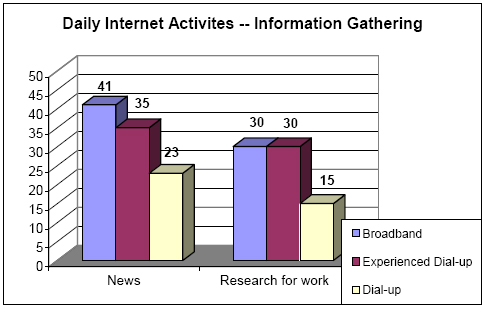 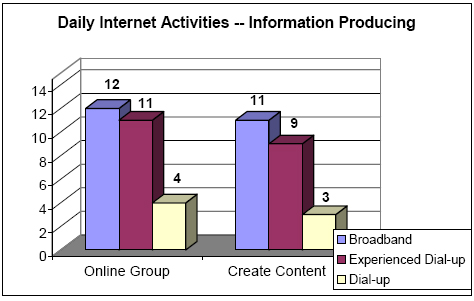 The differences are also fairly narrow when it comes information producing.  For participation in an online group and content creation, today’s broadband users and experienced dial-up users who want it are about as likely (on a typical day) to do these things.  In our surveys, online content refers to updating a Web page, updating a Web diary, or posting thoughts to a chat room or Internet group. 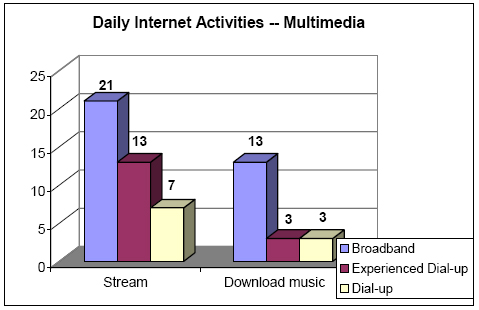 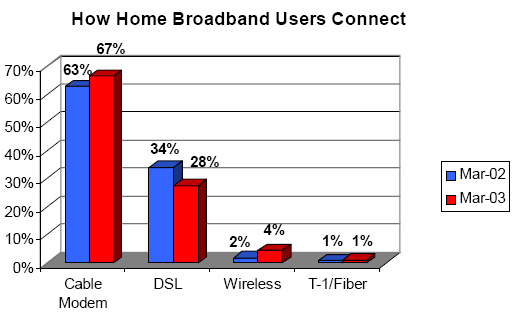 In the past year, there has been a slight shift toward cable modems and away from DSL as far as the composition of market share goes.  Still, with size of the pie expanding by about 10 million users in the past year, each type of connection technology has gained users.  About 21 million broadband users connected by cable modem in March 2003, up from 13 million a year earlier; DSL users grew in numbers from 7 million to 9 million during that time.  With the market share for wireless or fixed satellite high-speed access doubling from 2002 to 2003, the number of subscribers grew from a bit under half a million in 2002 to about 1.4 million in 2003.

There was 50% growth in home broadband adoption in the past year, but the torrid growth pace will likely slow.