In the early winter of 2002 the tracking survey of the Pew Internet & American Life Project showed that 57% of U.S. adults use the Internet – that comes to about 109 million people. Of those Internet users, more than 66 million have purchased a product or service online at some point in their Internet experience – not necessarily for gift-giving or holiday purchases. This represents a 10% increase in the number of online consumers from the holiday season in 2001 and is further indication that as Internet users gain more experience, confidence, and trust in the e-commerce environment they are willing to spend their money on Internet-based purchases.

While the growth of the number of Americans participating in e-commerce is notable, it is also important to put e-commerce in perspective. Simply stated, the overall volume of online sales is very small compared to the overall retail trade in America. The overall U.S. retail economy was $3.5 trillion in 2001 (the year for which the most recent data are available from the National Retail Federation based on U.S. Census figures. The best estimate for online consumer spending for 2002 was $74 billion, according to analysis by the Web monitoring firm comScore Networks – or just over 2% of the overall U.S. retail trade. Of that volume, comScore says that $43 billion is retail sales unrelated to travel purchases.

The National Retail Federation estimated that during the holiday season this year, about $209.3 billion worth of retail business would be transacted throughout the U.S. economy. Our estimate of the total volume of online shopping by Americans falls close to $11 billion and other projections put the volume at $8 billion measured by BizRate.com, the e-commerce research firm, $13.1 billion by online market research firm Jupiter Research, and $13.8 billion measured by comScore Networks. That means that holiday shopping online probably amounted to less than 1% of total holiday sales.

More than 30 million Americans bought gifts online (28% of Internet users). That compares to about 29 million who bought last year and 20 million who bought gifts during the holiday season in 2000. The composition of the online gift shopping population did not change much from 2001 to 2002. Women outnumbered men in most dimensions of online commerce. There were more women buying gifts than men and more women using the Internet to look for gifts and comparing prices.

About a fifth of those online gift purchasers were newcomers to the Internet gift-buying experience. These new shoppers tended to be newcomers to the Internet – many have less than two years experience online. Other than that, they showed no special demographic characteristics. In other words, the newcomers were about equally divided between men and women, and had no striking income or educational or racial profile.

In the overall e-commerce universe – not just the holiday shopping universe – it is still the case that men slightly outnumber women. But on any given day, equal numbers of men and women are buying products via the Internet. 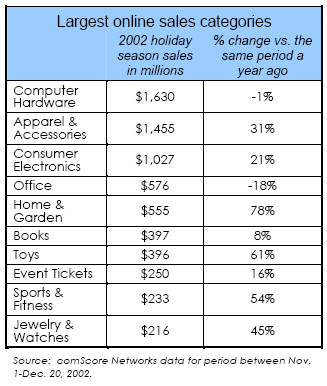 To put those figures in a broader context, it is interesting to note that the National Retail Federation estimated that average spending on holiday gifts was likely to be about $650 per person this year, compared to $632 in 2001.

Data from comScore Networks show that Computer Hardware was the largest merchandise category based on dollar sales for the period from Nov. 1 through Dec. 20.  However, mirroring the overall softness of the tech sector, sales of Computer Hardware decreased 1% versus a year-ago to $1.6 billion.  Apparel and Accessories continued its recent impressive performance and was the second largest category with sales of $1.5 billion and growth of 31%. Consumer Electronics was the third largest category, with sales of $1.0 billion, up 21% versus year ago. 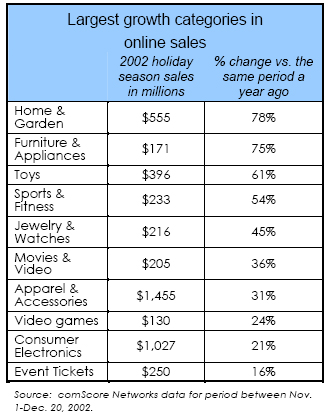 For the period from Nov. 1 through Dec. 20, Home and Garden ranks as the fastest growing major merchandise category, increasing 78% over last year to $555 million.  Furniture and Appliances increased 75% to $171 million, while Toys increased 61% to $396 million.

An uptick in online window shopping

The holiday season survey by the Pew Internet & American Life Project shows that 46% of online Americans used the Internet to look for gifts this year. That is almost 49 million people and represents some growth from previous years in the proportion of Internet users doing some gift research online. One of the more notable findings is that Hispanics with Internet access were particularly interested in looking for gift ideas, pricing and product information on the Web. As is invariably the case, the Internet users in higher socioeconomic groups and those with lots of Internet experience were among the most fervent window shoppers online. Broadband users were almost 50% more likely to do online window shopping as dialup users: 60% of those with high speed connections looked for gifts online, compared to 41% of those with dialup connections.

The appeal of online price and product comparisons is easy to understand and most Americans (Internet users and non-users alike) have high expectations they can get useful information about products and services online. In one recent Pew Internet & American Life Project survey, 79% of Internet users said they would expect to find information online about the products they were interested in buying from stores. Virtually all of those who have actually done product research say they always or “most of the time” find the information they are seeking.

Some of the demographic highlights: Online whites and Hispanics were among the most likely to cite the convenience of online gift buying as a major reason for their shopping. In addition, those who bought relatively large numbers of gifts online cited the convenience of this mode of shopping as a key issue. African-Americans with Internet access were particularly attracted to online gift-buying by the prospect of saving money, as were those who did most of their online buying early in the shopping cycle in the first weeks of December. Finally, those who spent the largest sums on gift purchases online were also those anxious to save time.

Six percent of Internet users wanted to help their loved ones with their shopping: These users created online “wish lists.” 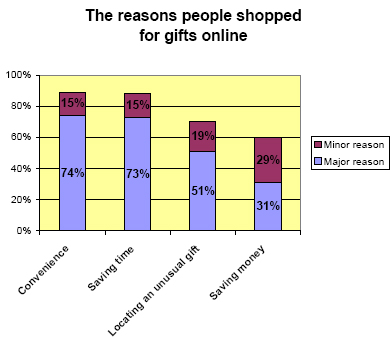 Where they logged on: One third shop online at work

Online auction activity is up

What is even more striking is that the number of daily auction participants has more than doubled since mid-2000. In December 2002, about 4.5 million U.S. Internet users were involved in auctions on any given day. In June 2000, fewer than 2 million Internet users were participating in online auctions.