The convenience of conducting business on the Internet has been a consistent theme in Pew Internet Project studies. Internet users pursuing health information, political news, and holiday gifts all cite convenience as a factor in their choice to go online to find what they are looking for. Internet users also say email helps them stay in touch with friends and family without having to spend so much time talking to them. And Internet users who have a high-speed connection at home take advantage of “always on” access to get more online tasks accomplished in a typical day than the average dial-up user. 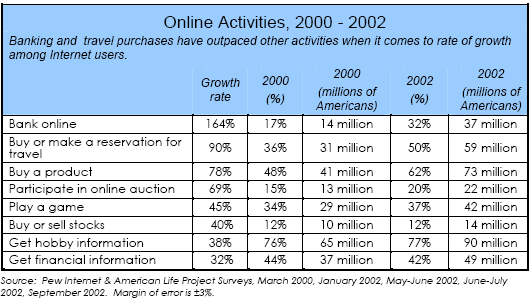 It is likely that convenience is not the only factor driving the popularity of online banking and travel purchases. Some users are using the Internet to save money – 30% of e-bankers say this was a “very important” reason why they decided to bank online. One online bank, NetBank, now charges $3 for each paper statement and many companies are strongly encouraging their customers to accept an electronic bill.1 Some airlines reward online consumers with special discounts – and reap the benefits of increased traffic to their Web sites.2 In both cases, the industry is educating consumers about Internet transactions by making them pay for off-line equivalents.

The rise in the popularity of online banking builds on the Federal Reserve’s recent report about a drop in the number of paper checks written by consumers. In 1995, the Fed processed 49.5 billion checks. In 2000, the Fed processed 42.5 billion checks – a 14% drop.3 Our numbers also match those of Internet users who enjoy the convenience of donating money to charities online. About one-third of online donors also do their banking and bill-paying online according to surveys conducted by Craver, Mathews, Smith & Company.4 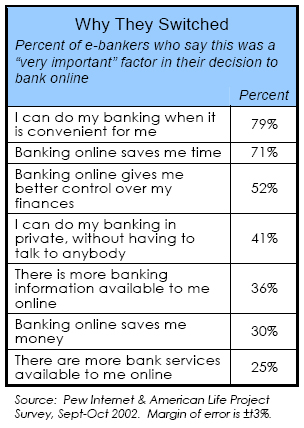 The other reasons to switch to online banking elicited strong feelings from e-bankers, but they were consistent across the board. No one group felt more strongly than another about the advantages of better control over finances, not having to talk to anybody, getting more information, saving money, or using a wider menu of bank services online.

The longer someone has been online, the more likely they are to port their banking business to the Internet. Thirty-nine percent of those who have been online for four or more years have banked online, compared to 20% of those with two to three years of experience and 6% of those with one year of experience online. Internet users with a high-speed connection at home are also much more likely to bank online – 49%, compared to 30% of dial-up users.

This report is based on the findings of a daily tracking survey on Americans’ use of the Internet. The results in this report are based on data from telephone interviews conducted by Princeton Survey Research Associates between September 9 and October 6, 2002, among a sample of 2,092 adults, 18 and older. For results based on the total sample, one can say with 95% confidence that the error attributable to sampling and other random effects is plus or minus 2 percentage points. For results based Internet users (n=1,318), the margin of sampling error is plus or minus 3 percentage points. In addition to sampling error, question wording and practical difficulties in conducting telephone surveys may introduce some error or bias into the findings of opinion polls.