The striking growth of the music downloading population occurred across virtually every demographic group and level of online experience. It was pronounced among the very freshest newcomers to the Internet as well as the most experienced online veterans. The increase in the number of music downloaders also occurred among online men and women, the well-to-do and those in modest economic circumstances, and in different racial and ethnic groups, particularly among Hispanics.

The appeal of downloading music has grown during the same period that legal controversies have swirled around the Napster file-sharing service. The Recording Industry Association of America has argued that the Napster service violates copyright protections by allowing millions of Internet users to swap copyright protected files without compensating the artists who created the music.

In March 2001, San Francisco District Court Judge Marilyn Hall Patel, following a February ruling by the 9th Circuit Court of Appeals, issued a modified version of an earlier injunction ordering that Napster filter all copyright-protected songs from its index. Patel’s ruling required that record labels claiming copyright infringement provide Napster with a listing of copyrighted songs that should not be swapped through Napster. Upon receiving a song list, which must include each song’s title, the artist, the file name containing the song, when possible, and proof of the label’s copyright, Napster has three business days to remove all appropriately identified files. While Napster attorneys claim the company is doing all it can to comply with the federal court’s injunction, counsel for the recording industry continue to argue that the file sharing company’s filtering technology is insufficient. In a recent hearing, Patel, dissatisfied with Napster’s filtering efforts, appointed Dr. A.J. Nichols as technical expert for the court and as conciliator between Napster and the recording industry. Dr. Nichols will advise the court and help both sides of the case resolve how Napster’s filtering technology should work.

Patel also announced that music publishers would likely be allowed to consolidate their cases into a single class-action suit. The judge said she expects to create a limited class of parties eligible to enter a class-action suit against Napster. A class-action suit would be devastating to Napster because each publisher could potentially collect hundreds of thousands of dollars per copyright infringement.

The court struggles have had an impact on the number of music files that appear to be available on the Napster service. In April 2000, regular spot checks by the Pew Internet Project showed that the average Napster user sharing files on the system had about 100 songs on his or her computer’s hard drive. As the case filed by the recording industry against Napster came to a climax in late July 2000, Napster users began to increase the number of songs they were making available. Pew Internet Project spot checks suggested then that the average number of shared files grew to between 120 and 130. When the 9th Circuit Court of Appeals was hearing Napster’s case in January 2001, the average number of shared files per user jumped to between 180 and 200. However, after the federal appeals court upheld the district court’s ruling that Napster had to stop facilitating the sharing of copyrighted files and Napster began to block the sharing of some copyrighted songs from its index, the numbers fell sharply. Spot checks by the Pew Internet Project in March and April suggest that the number of shared files per user had fallen to the 70-80 range.

In an effort to comply with the U.S. District Court’s ruling, Napster claims it has blocked more than 1.7 billion song files from its directory as of April 10, 2001. The figure represents fewer than the actual number of blocked songs, however, because users give multiple titles to individual songs, in some cases, in apparently deliberate attempts to ensure popular songs are not recognized by Napster’s copyrighted-song sniffing system. For instance, one user sharing songs from Bruce Springsteen’s new live album titled one track “Bawn in the USA,” and another sharing Christina Aguilera songs called one “What a Girls Wants.”

Yet, even as Napster’s legal hardships rose, less centralized file sharing systems came into being. They will be perhaps impossible to regulate because they don’t function as Napster does through a central mediating server that searches through the “addresses” of MP3 files stored on Napster users’ computers. For instance, one of the new technologies, Gnutella, creates a network of users over the Internet, and transmits a search request from one user to other users’ individual computers, until the file is found. Gnutella has no company behind it, and no central servers, so it is virtually impossible to shut off or regulate. Several Web sites such as BearShare and LimeWire interface with the Gnutella network in easy-to-use, Napsteresque fashion. Unlike Napster, which was established specifically for audio files, Gnutella and other peer-to-peer networking systems such as FreeNet facilitate the transfer of a variety of multimedia file formats and software. 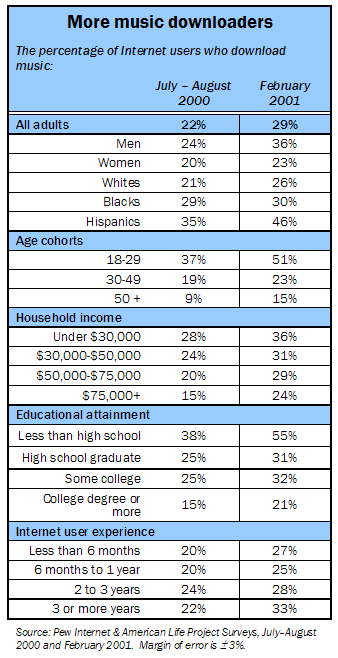 Most major record companies are trying to find ways to exploit this burgeoning interest in online music transmission. AOL Time Warner Inc. (Warner Music), EMI Group PLC (EMI) and Bertelsmann AG (BMG Entertainment) recently agreed to join together with software and Internet-audio-and-video distribution company RealNetworks to form an online subscription based music network called MusicNet. And Napster itself has said it plans to move to a subscription-based service in the next few months.

One of the major attractions of the Internet to newcomers is the fact they can download music so conveniently and, in most instances, at no extra cost. While they are hesitant to do some of the more sophisticated activities online such as buying products or getting job information from online sources, Internet newcomers are almost as eager to download music as those who have been online for longer periods of time. Not only did downloading music from the Internet become more generally common among all experience levels of Internet user, but the frequency with which these people downloaded music increased as well. Most dramatic of all was the increase in downloading music among those with substantial Internet experience.

The Pew Internet Project polls indicate that the less money a person makes the more likely it is he or she downloads music from the Internet. This might result from the fact that downloading music is a particularly appealing activity to young Americans and, as a rule, they live in households with less income than those who are middle-aged or older.

Some 36% of Internet users who live in households making less than $30,000 annually download music while online — this is up from 28% in July-August 2000. In comparison, the percentage of Internet users from households earning $75,000 or more who download music increased from 15% in July-August 2000 to 24% in February 2001. The likelihood of finding an Internet user from the most wealthy households surveyed (more than $75,000 annual income) downloading music while online increased nearly 75%, while the likelihood of finding a music-downloading Internet user from the least wealthy households surveyed (less than $30,000 annual income) increased nearly 117%.

The Pew Internet Project conducted a special survey of 754 children between ages 12 and 17 between November 2 and December 15, 2000. That survey sample is slightly more upscale and more composed of white children than our general surveys, but the differences were not greatly at variance with our other surveys. The youth survey showed that more than half the children (53%) in that age bracket have downloaded music. It was particularly popular with online boys, some 60% of whom said they downloaded music, compared to 47% of girls. Some 73% of older boys (ages 15-17) had downloaded music. There was some evidence that the prevalence of downloading increased with age. For instance, 44% of the kids between ages 12-14 had downloaded music and fully 61% of those 15-17 had done so.1

In a study issued last year, the Pew Internet Project found that more than three-quarters of adult Internet users (79%) who download music get the files off the Internet for free. Some 15% said in a July-August survey they pay for it at the time they access the files. Still, music downloaders aren’t all refusing to pay artists – most (69%) say that at least on occasion they end up purchasing music they have downloaded. At the same time, the vast majority of music downloaders also say they do not frequently purchase the music they got for free on the Internet.

At the same time, there were encouraging signs that online posting and marketing of music can work for new artists. Thirty-one percent of music downloaders had loaded songs onto their computers by an artist they had never heard before.

Twenty-eight percent of music downloaders say captured music that they already owned in another form (CD or tape) and 63% downloaded new music.

This finding came before a bulletin was issued to radio stations on March 5 by the Joint Policy Committee on Broadcast Talent Union Relations (JPC) of the Association of National Advertisers and the American Association of Advertising Agencies reminding them they owe hefty fees to those who are featured in advertisements that are streamed onto the Internet with the rest of a radio station’s content. This prompted many major radio stations to halt their streaming. There were early indications this had reduced the number of online music listeners.

Next: Methodology and About Us
← Prev Page
You are reading page1Page2
Next Page →