There is abundant evidence that use of the Internet has played a role in revolutionizing the more than $1 trillion health care industry in America. Doctors, hospitals, health maintenance organizations (HMOs), insurance companies, and Internet firms are using the Internet to retool the business of medicine. More and more health care providers are interacting with their colleagues via email and are interested in using email and the Web to interact with patients, to locate the most current literature on the effectiveness of specific treatments, and to conduct research themselves, sometimes in collaboration with colleagues on the other side of the world.

At the same time, the surveys of the Pew Internet & American Life Project show that the Internet has become a valued source of health-care information for a substantial number of Internet users. Fifty-two million adult Americans – 55% of the Internet-user population – have turned to Internet sources to seek health information. In this report, we call them “health seekers” because most are in pursuit of information that will help them at a time when they or their loved ones are sick. Patients and their families are using the Internet to help with many aspects of care, but they are most likely to have sought material to find out about the options they have for battling illnesses and the prognoses for those illnesses. In addition, they investigate how to participate in clinical trials for new drugs; they examine reports on the course of diseases; they buy vitamins, download fat-free recipes, use calorie calculators, and search for ways to develop “washboard abs.” Further, they check report cards for hospitals, doctors, and health insurers. Some support each other through disease-specific bulletin boards and trade ideas about how to deal with symptoms with support groups.

This is all taking place in an environment where the burden of responsibility in the health-care system has shifted more to patients. Health maintenance organizations and tighter insurance rules have compelled patients to take more assertive roles in their own care. A typical doctor’s visit has reportedly shrunk to less than 15 minutes, and many patients leave a physician’s office without getting answers to all the questions they have. One 1999 survey by Yankelovich Monitor found that half or more of Americans are not satisfied with the availability of their doctors and not satisfied with the duration of their meetings with their doctors. Not surprisingly, many Internet users have turned to the Web to provide the information they find hard to get from their care-givers and because they are increasingly interested in participating in what the medical community calls “shared decision-making.” 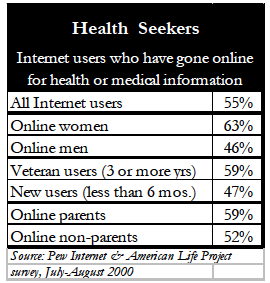 The health-seeker population is made up of many more women than men. Fully 63% of women with Internet access have sought health information, while 46% of online men have done that. On a typical day, this gender difference is reflected in the fact that 59% of those seeking such information are women.

Health seekers are proportionally more middle-aged than very young or old, with the highest proportions of usage showing up in those between the ages of 30 and 64. Two thirds of women between the ages of 30 and 49 who have Internet access have gone online to get health or medical information. The other demographic trait that distinguishes health seekers is their level of experience with the Internet. The longer someone has had access to the Internet, the more likely it is that she has gotten medical information. Some 59% of those with three years of Internet experience have sought medical information, compared to 47% of those who first went online within the past six months. It is worth noting, though, that this gap between veterans and newcomers is substantially smaller when it comes to health information than it is on many other popular Internet activities.

In our survey, 91% of health seekers reported they were covered by health insurance – the rest said they weren’t covered. That means health seekers are more likely to have insurance than members of the general U.S. population. Some 15.5% of all Americans – adults and children – are uninsured.

The rest of the demographic story about health seekers is notable for what does not occur. In contrast to many other online activities, the seeking of health information is equally compelling to all racial and ethnic groups. Similarly, there is no major “income” effect on this activity. The likelihood that someone has gotten health information does not correlate with her household income. Compared to, say, online auctions or online banking, the search for health information is a relatively popular activity with newcomers to the Internet and they are more likely to be members of minority groups and those from households with incomes under $50,000.

The most significant finding in this survey is that the health decisions made by many health seekers are influenced by the health and medical information they find on the Web. More than four in ten health seekers (41%) say that the material they found during their last online search affected their decisions about whether they should go to the doctor, how to treat an illness, or how to question their physician. Half of all Internet users who have gone online for medical information (48%) say the advice they found on the Web has improved the way they take care of themselves and 55% report that it improves the way they get health care information.

In many cases, the timing of the online search for health information, the nature of the search, and the impact of the search depended on who is doing the search. Women and men perform different kinds of health searches online. Those who are in excellent health do different kinds of searches from those who are in less-than-excellent health. And those who are searching for information on behalf of themselves have a different purpose from those who are seeking information on behalf of others, like children, parents, or other relatives. One Internet user sent a testimonial to our site about how online health research has improved his own health care and that of his wife, his children, and his great-aunt – keeping him more up-to-date than their doctor on some medical procedures.

The results in Section One of this report are based largely on two surveys: One uses data from roughly six months of telephone interviewing conducted between March and August 2000, among a sample of 12,751 adults, 18 and older – 6,413 of whom are Internet users. The other was a survey during the summer probing all Internet users’ feelings about health privacy. It involved 2,109 persons, 1,101 of whom are Internet users. In addition to this daily tracking poll, we conducted a special survey of 521 Internet users who go online for health care information, the results of which are detailed in Section Two. This special sample, which was conducted August 3-14, portrays the habits and attitudes of the 52 million Americans who use the Internet for medical information and advice.

Next: Section 1: All Internet Users
← Prev Page
Page1Page2You are reading page3Page4Page5Page6
Next Page →