What health seekers want and how they hunt for it*

*This section is based largely on a special survey of 521 Internet users who go online for health care information.

Health seekers are mostly interested in investigating specific physical and mental ailments and their searches often are tied to visits to the doctor. However, they do not use the medical establishment or even friends to help guide their online searches when it comes to health care. Most health seekers treat the Internet as a vast, searchable library, relying largely on their own wits, and the algorithms of search engines, to get them to the information they need. Asked about the most recent time they got health-related information online, more than 30% checked out four or more Web sites. Younger health seekers and those with relatively high educations (at least some college-level work) are the most likely to have looked at multiple sites. 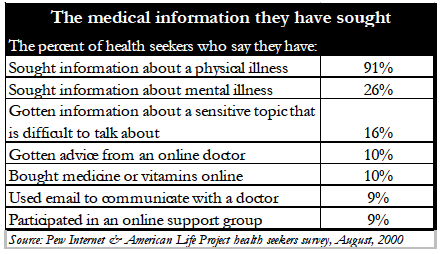 In contrast to their aggressive use of the Internet to do research about specific illnesses, health seekers are much less likely to have interacted with a doctor online, to have searched for general news about health and medicine, or to have bought a medical product or vitamins online. While online pharmacies promote the convenience of ordering online – and some skirt federal laws by dispensing sensitive items such as Viagra without a prescription – most health seekers are not yet using the Web as a substitute for the corner drug store. Only 10% of health seekers have purchased medicine or vitamins online.

The quality of information: Verify before trusting

Much of the health information available on the Web is not monitored for accuracy or quality. The Federal Trade Commission estimates that doctors review only about half of the content on health and medical Web sites. There is significant concern – especially on the part of advocates for the chronically ill – that patients may harm themselves based on inaccurate information or products obtained on the Internet. In October, for example, a Web-distributor of a home HIV test kit was brought up on charges of misleading his customers because the Federal Drug Administration did not, in fact, approve the faulty kit he sent to over 600 people in the U.S. The few studies by scholars and medical professionals have raised concerns about the reliability of online information. For instance, a 1999 survey by a team at the University of Michigan of 400 health sites found that half of them had not been scientifically reviewed and that 6% provided incorrect information. A study in 1997 that focused on the recommendations of 41 Web sites on how to deal with children’s fevers found that only four of the sites offered recommendations that were completely consistent with established guidelines in the medical community. Because of such fears, the American Medical Association and other medical groups have mounted major campaign to stress that consumers need to check the quality of information they get online.

The absolute value of anonymity

Health seekers report a broad lack of interest in activities that might require them to identify themselves online. They want to be in control of the search for health information and they do not relish giving up personal information in the process. These Internet users would much rather stay anonymous than participate in an exchange about health information online where personal information was given up in return for access to a site or for customized content. In fact, the anonymity of Web searches for health information is sometimes seen by users as preferable to contact with human beings. Some 16% of health seekers have gone online to get information about a sensitive health topic that is difficult to talk about. Health seekers under the age of 40 are also more likely to have done this – 23%, compared to 10% of those over 40.

The vast majority of health seekers are concerned that a health site might disclose what they did online, most worry about their insurance companies or employers finding out what Web sites they have accessed, and most object to the idea of having their medical records posted even on a secure server.

Only 9% of health seekers have participated in an online support group for people who are concerned about the same health or medical issues. This contrasts sharply with another Pew Internet Project survey that found 36% of Internet users who had gone to a support-group site or one that provides information about a specific medical condition or personal situation. Again, it appears that health seekers are much more protective of their privacy than the general Internet population.

Despite the fact that 89% of health seekers say they are concerned that a health Web site might sell or give away information about what they did online, just 24% of health seekers have clicked on a health or medical Web site’s privacy policy to read about how the site uses personal information. Health seekers who have expressed privacy concerns are more likely to have clicked on the privacy policy – 31%, compared to 21% of those who say they are not too concerned about privacy. 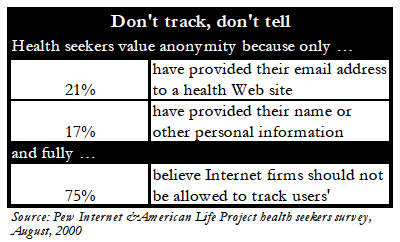 Most commercial health Web sites rely on advertising for a large portion of their revenue. Third party ad networks – such as Doubleclick – are interested in tracking and profiling Internet users so that customized ads and content could be placed on their screens. While many of the firms that run health sites say they do not profile based on the health-related material a user has accessed on their site, there is a great deal of concern among privacy advocates that advertisers can have access to sensitive health information without the consumers’ knowledge or consent.

There has not been an extensive review of the privacy policies of the entire universe of health-related Web sites. One important analysis of the 21 most heavily used health sites by the Health Privacy Project in early 2000 showed that several sites warn users that advertisers might have access to information, and that the sites have no “control” over this practice. But most of the policies were silent on the issue of profiling. Unless an Internet user is a very savvy Web surfer, she will never know if she is being tracked and profiled by a health Web site or those that advertise on the site.

Advocates of profiling argue that it brings several advantages to Internet users. They say that it helps Internet companies provide customized information and tailored ads that closely match a user’s interests. That helps the user get the information she needs and makes her aware of the products that matter most to her. This eliminates waste and makes it easy and quick for users to get the information they are seeking. Moreover, many point out that the growth of the Internet would not be taking place were it not for the fact that advertising supports the availability of much of the information online. 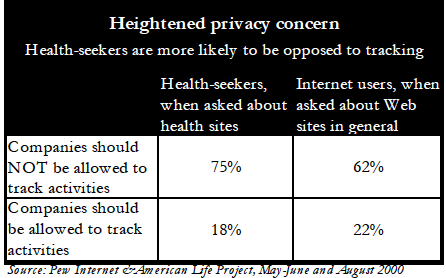 Yet while health seekers are determined to preserve their privacy, few have resorted to guerrilla tactics to get access to Web sites. Just 4% of health seekers have provided a fake name, email address, or other personal information in order to avoid providing real information at a health Web site. In our trust and privacy study, we found that 24% of Internet users have provided a fake name or personal information in order to gain access to a Web site.

And, in a finding that runs counter to existing federal policy, 81% of health seekers think people should be able to sue a health or medical company if it gave away or sold information about its Web site users after saying that it would not. Under current law, the Federal Trade Commission can take action, but individuals have no federal right to sue.

To move beyond abstractions and get a picture of Internet users’ actual behavior, we asked health seekers to relate details about their most recent foray online for health information. For about one-quarter of respondents, it was a fresh memory. Some 23% of health seekers said the last time they went online to look for medical advice or information was within the last week; 35% said it was in the last month; 31% said it was in the six last months, and 10% said it was sometime more distant in the past than that. 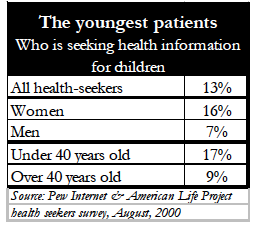 Of those who were looking for online guidance about a specific illness or condition, 48% looked up symptoms of that illness, 30% sought information about medicines or treatments, and 29% were trying to find out what happens to people who contract a specific illness. 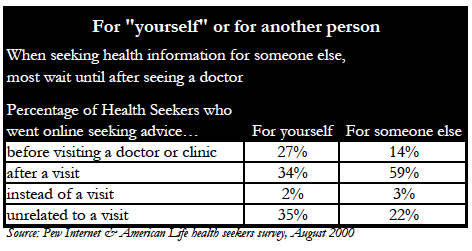 Those who sought information on behalf of another person were somewhat less likely to say that information found online affected decisions about the person’s health care. Still, more than a third (36%) of those hoping to help a loved one or friend said the Web resources affected the decisions they made about how to help the patient. 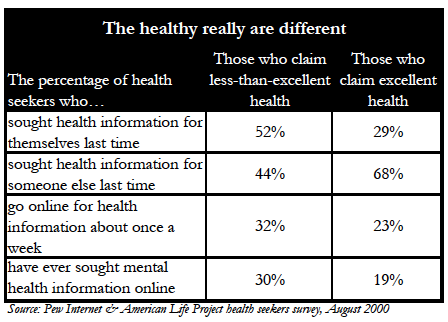 Those in excellent health were more likely to seek advice on behalf of someone else – a child, parent, relative, or another person.

How women and men differ in their online behavior

More often than men, women carry out health searches after a doctor’s visit. Women are also more likely to access online health information on behalf of their children. There are no notable gender differences when health seekers are looking for information on behalf of parents, other relatives, or other people. However, men are more likely than women to have used the Web information they gathered to ask follow-up questions of a medical professional. 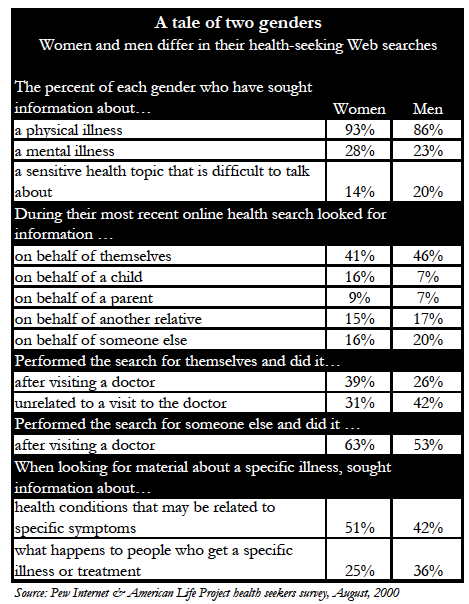 Frequent users of health Web sites were more likely to be engaged in online activities that augment their health care. About 59% of health seekers report going online for health information at least once a month. There is not a notable gender difference in this, but age plays a role: 63% of health seekers under age 40 are frequently online for health information, compared to 54% who are over that age. Two-thirds of those living in households earning less than $50,000 report going online frequently for health information. And users who are less well physically use the Web more often than health seekers who describe their health as “excellent.” Some 62% of those in less-than-excellent health report going online to get medical advice at least once per month, while 53% of those in excellent health report frequent health searches online.

Internet users who said they go online for health information at least once a month are more likely to participate in an online support group, buy medicine or vitamins online, email their doctor, check a site’s privacy policy, describe a medical condition online to get advice, bookmark a favorite health site, verify the source of a site’s health information, and look for information about a physical or mental health issue. These highly engaged health seekers are also more likely to say the Internet has improved the way they take care of their health, compared to those who seek online health advice every few months or less often.

The Online Health Care Revolution Acknowledgement Introduction Section 1: All Internet Users
Section 2: Health Seekers
What health seekers want and how they hunt for it*The quality of information: Verify before trustingThe absolute value of anonymityDon’t follow me aroundCase study: The last time each health seeker went onlineThe healthy try to help others; the less-healthy try to help themselvesHow women and men differ in their online behaviorFervent and engaged health seekers
Methodology