Trust and privacy online: Why Americans want to rewrite the rules

In a season of growing concern about privacy on the Internet, The Pew Internet & American Life Project surveyed 2,117 Americans, 1,017 of whom are Internet users, from May 19 to June 21 about trust and privacy online. Their responses illustrated some fascinating cross currents on these issues. Online Americans have great concerns about breaches of privacy, while at the same time they do a striking number of intimate and trusting things on the Internet, and the overwhelming majority have never had a seriously harmful thing happen to them online.

On some major points, though, there is a powerful consistency: The first point is that American Internet users overwhelmingly want the presumption of privacy when they go online. The second point is that a great many Internet users do not know the basics of how their online activities are observed and they do not use available tools to protect themselves. The highlights of the survey:

The vast majority of American Internet users want the privacy playing field tilted towards them and away from online companies. They think it is an invasion of their privacy for these businesses to monitor users’ Web browsing. By a two-to-one margin they reject the argument made by some firms that Web tracking can be a helpful, but users are willing to share personal information under certain circumstances.

Some users employ guerrilla tactics, but most don’t exploit the privacy-protecting tools that already exist

In order to protect their privacy, a relatively small number of savvy users are devising their own “opt-in” policies and deciding that some Web sites are not worthy of getting their personal information. But most users do not use available privacy-protection tools, perhaps because they are unaware of how Web sites work and how existing technologies can be deployed to protect them.

Companies should keep their promises – or else

Internet users want to punish firms and their executives when they violate users’ privacy.

Despite their deep-seated concerns, Americans have not been victimized online in great numbers.

… and the incidence of trusting activities is high

Americans continue to trust email, surf the Web for advice about intimate aspects of their lives, make friends online, and turn to Web sites for health information, for spending their money, and for material about their finances.

The things that concern Internet users 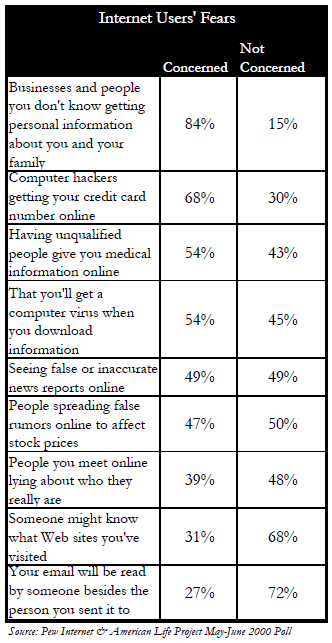 Next: Main Report
← Prev Page
You are reading page1Page2Page3Page4
Next Page →