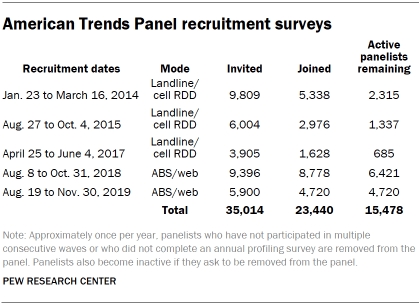 Data in this report are drawn from the panel wave conducted December 3 to December 23, 2019. A total of 3,030 panelists responded out of 5,395 who were sampled, for a response rate of 56%. This includes 2,094 from the ATP and an oversample of 936 respondents sampled from Ipsos’ KnowledgePanel. The cumulative response rate accounting for nonresponse to the recruitment surveys and attrition is 2.4%. The break-off rate among panelists who logged onto the survey and completed at least one item is 0.4%. The margin of sampling error for the full sample of 3,030 respondents is plus or minus 2.9 percentage points.

The USPS Delivery Sequence File has been estimated to cover as much as 98% of the population, although some studies suggest that the coverage could be in the low 90% range.7

The ATP data was weighted in a multistep process that begins by calibrating the entire panel so that it aligns with the population benchmarks identified in the accompanying table to create a full-panel weight. For ATP waves in which only a subsample of panelists are invited to participate, a wave-specific base weight is created by adjusting the full-panel weights for subsampled panelists to account for any differential probabilities of selection for the particular panel wave. The next step in the weighting uses an iterative technique that aligns the sample to population benchmarks on the dimensions listed in the accompanying table. For this wave, additional weighting parameters were added to adjust for citizenship, years in the U.S., country of birth and Hispanic origin.

For the purposes of this report, references to foreign-born Hispanics include those born in Puerto Rico. Individuals born in Puerto Rico are U.S. citizens by birth. Sample sizes and sampling errors for other subgroups are available upon request.

Trends in online search data volume used in this report are based on data from Google Trends, a publicly available web-based tool that measures search volume of a specific search term across time, in specific languages and in specific countries. In this report, search term data are for the terms for “Latinx,” “Latina,” “Latino” and “Hispanic” among searches conducted in the U.S. Monthly data were downloaded for the period of Jan. 1, 2004, through June 30, 2020.8

Google standardizes online searches on a 0 to 100 scale for the time period selected by the user, with 100 representing the peak level of searches given a region and time period. Internet search data analysis like that available from Google Trends has limitations. Internet search data is an indicator of interest in a topic, not attitudes toward it. Actual motivation for searches or behavior related to searches cannot be authenticated using Google Trends alone.

About One-in-Four U.S. Hispanics Have Heard of Latinx, but Just 3% Use It 1. How widespread is awareness of Latinx? 2. Who uses Latinx? 3. Views on Latinx as a pan-ethnic term for U.S. Hispanics Acknowledgments
Methodology
The American Trends Panel survey methodologyOnline search data