For this report, we analyzed trends in unemployment rates among U.S. Hispanics as well as how Hispanics view the national economy and their personal financial situations both amid the coronavirus outbreak and prior to COVID-19.

Estimates of the unemployment rate are from the U.S. Bureau of Labor Statistics. The bureau has noted that the official unemployment rate likely understated the actual state of unemployment in March, April, May and June 2020. The understatement was greater for women, immigrants and several other groups, according to a Pew Research Center analysis.

For Hispanic views from before COVID-19, we drew on the Center’s National Survey of Latinos, which surveyed 3,030 U.S. Hispanic adults in December 2019. This includes 2,094 Hispanic adults who were members of the ATP. It also includes an oversample of 936 respondents sampled from Ipsos’ KnowledgePanel, another online survey panel also recruited through national, random sampling of residential addresses. The survey was conducted in both English and Spanish.

Recruiting panelists by phone or mail ensures that nearly all U.S. adults have a chance of selection. This gives us confidence that any sample can represent the whole population (see our Methods 101 explainer on random sampling), or in this case, the whole U.S. Hispanic population. To further ensure that this survey reflects a balanced cross-section of the nation’s Hispanic adults, the data is weighted to match the U.S. Hispanic adult population by gender, nativity, Hispanic origin group, education and other categories. Read more about the ATP’s methodology.

Here are the questions used for the report from the National Survey of Latinos, along with responses, and its methodology.

The coronavirus outbreak has significantly harmed the finances of U.S. Hispanics. As the nation’s economy contracted at a record rate in recent months, the group’s unemployment rate rose sharply, particularly among Hispanic women, and remains higher among Hispanic workers than U.S. workers overall. With Hispanic households absorbing lost jobs and wages, many have said they may not be able to pay their bills. Yet even before the outbreak, Hispanics were concerned about their economic situation despite near record low levels of unemployment through the end of 2019.

Latinos say they have had a hard time making ends meet during the outbreak, according to Pew Research Center surveys. About six-in-ten Latinos (59%) in May said they live in households that have experienced job losses or pay cuts due to the coronavirus outbreak, with a far lower share of U.S. adults (43%) saying the same. As Latino incomes dwindled, most in April said they do not have emergency funds to cover three months of expenses, and half or more said they worry daily or nearly every day about financial issues like paying their bills, the amount of debt they carry and the cost of health care.3 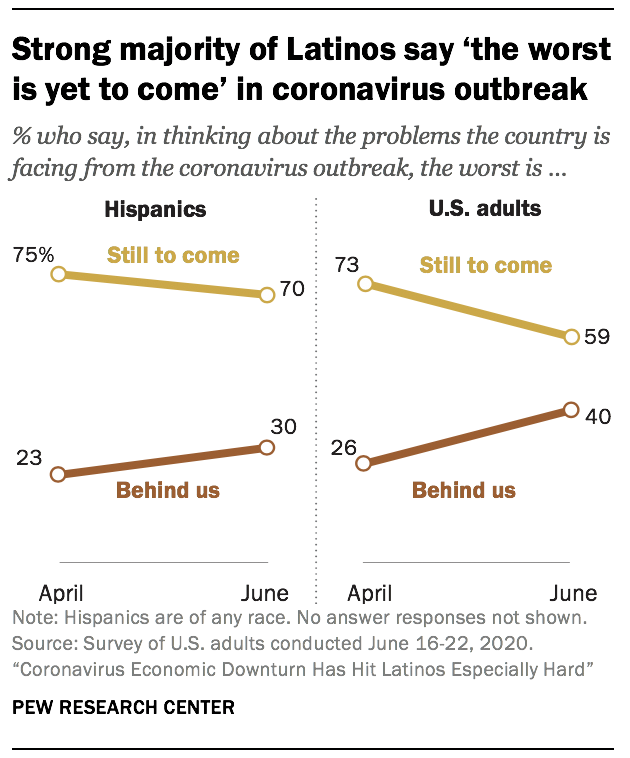 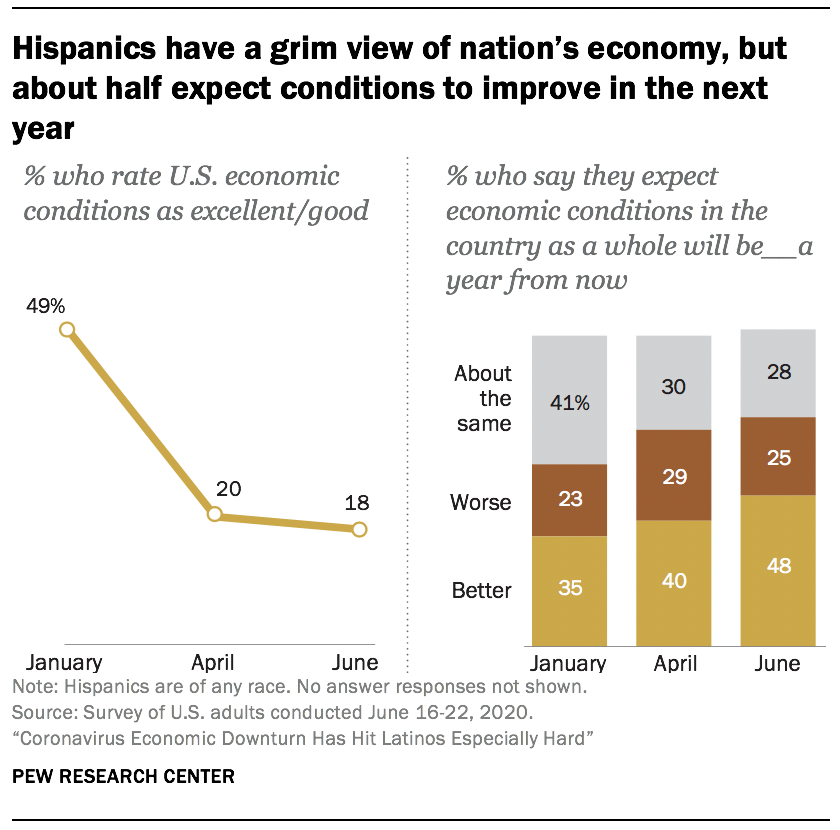 While Americans overall are deeply unhappy with the nation’s direction, satisfaction has dropped more among U.S. adults than Hispanic adults. In June, more Hispanics (20%) than Americans overall (12%) said they were satisfied with how things are going in the country, down from 29% and 31% in April, respectively.

As for the economic prospects of future generations, Hispanics have grown more optimistic about their prospects, though it’s still a minority that hold this view. About one-in-four Hispanics (26%) said life will be better for future generations of Americans, according to the June survey, up from 16% in September 2019. 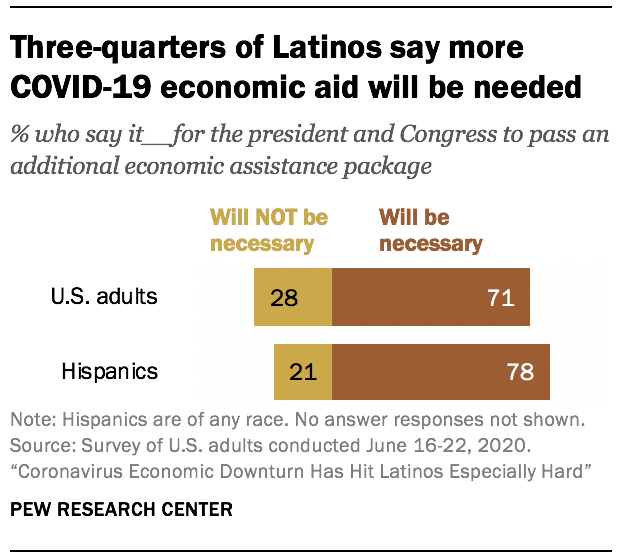 About three-quarters of Latinos (78%) say it will be necessary for Congress to pass another economic relief bill in addition to the $2 trillion economic assistance package passed by Congress in March and signed by President Donald Trump. 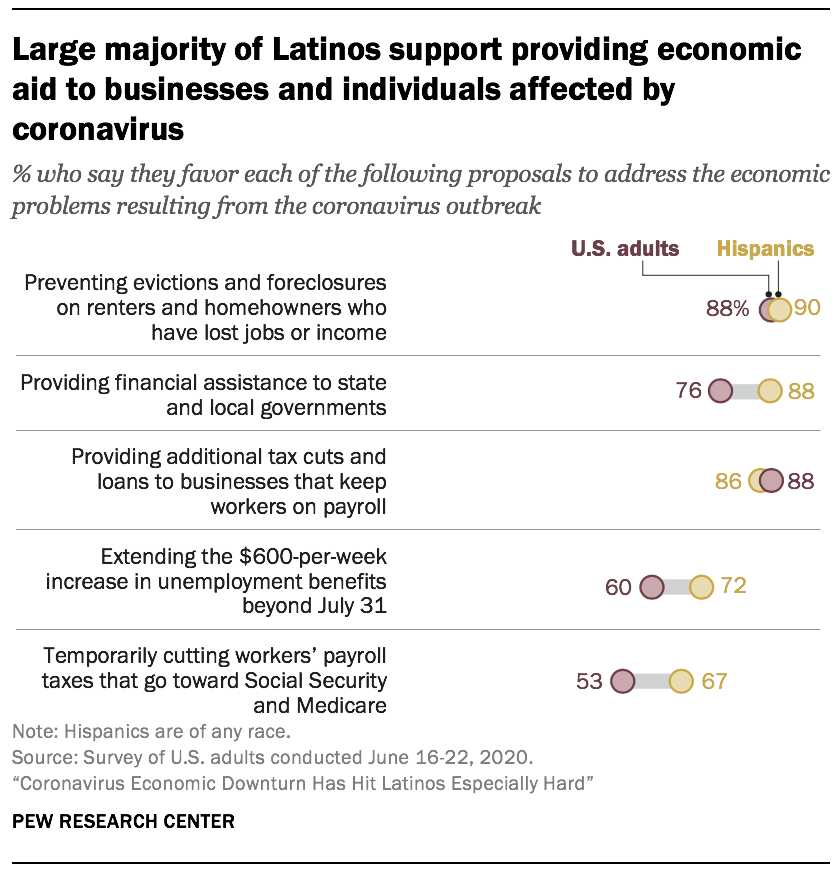 When it comes to policies to address economic problems resulting from the coronavirus outbreak, large majorities of Latinos favor every option presented: 90% support preventing evictions and foreclosures on renters and homeowners who have lost jobs or income; 88% support providing financial assistance to state and local governments; 86% support providing additional tax cuts and loans to businesses that keep workers on payroll; 72% support extending the $600-per-week increase in unemployment benefits beyond July 31; and 67% support temporarily cutting workers’ payroll taxes that go toward Social Security and Medicare. U.S. adults support assistance that prevents evictions and foreclosures for individuals (88%) and provides tax cuts and loans for businesses (88%) at similar levels as Hispanics. By contrast, fewer Americans overall favor providing financial assistance for state and local governments (76%), extending unemployment benefits (60%) and cutting workers’ payroll taxes (53%).

Before coronavirus, Latinos said immigration and the economy were the most important problems facing the U.S.

Even before the coronavirus outbreak, Hispanics found themselves on unsteady financial ground, despite near record low levels of unemployment. The Great Recession hit Hispanics particularly hard, and households saw significant declines in wealth and income. The economic recovery was uneven, with some groups faring better than others. By 2017, the median household income for Hispanic immigrants had returned to and exceeded pre-recession levels, while those for the U.S. born still lagged pre-recession levels. 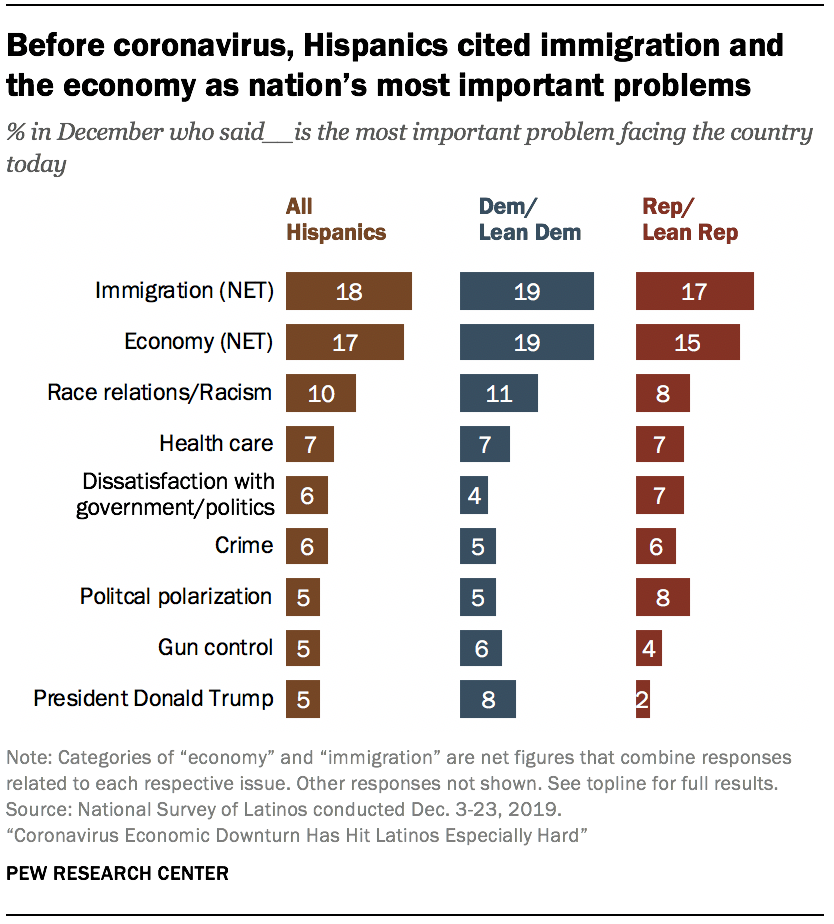 When asked about the most important problem facing the U.S., Hispanics most often cited issues related to immigration (18%) and the economy (17%), according to a December survey of Latino adults. Smaller shares said race relations or racism (10%), health care (7%), dissatisfaction with government or politics (6%), crime (6%), political polarization or national divisions (5%), gun control (5%) and President Donald Trump (5%).

While Hispanic Democrats and Hispanic Republicans both cited immigration and the economy among the most important problems facing the nation, their views differed on Trump. For Hispanic Democrats, Trump (8%) is cited about as often as race relations and racism (11%) as the most important problem facing the country. By contrast, far lower shares of Hispanic Republicans cited Trump (2%) as the nation’s top problem.

Before coronavirus, most Latinos viewed their personal finances in a more negative than positive light

Younger Hispanics tended to give their finances lower marks than older Hispanics, though the differences were relatively modest. About two-thirds of Hispanics (68%) ages 18 to 29 said their personal financial situation was in only fair or poor shape, compared with 60% of those ages 50 and older. 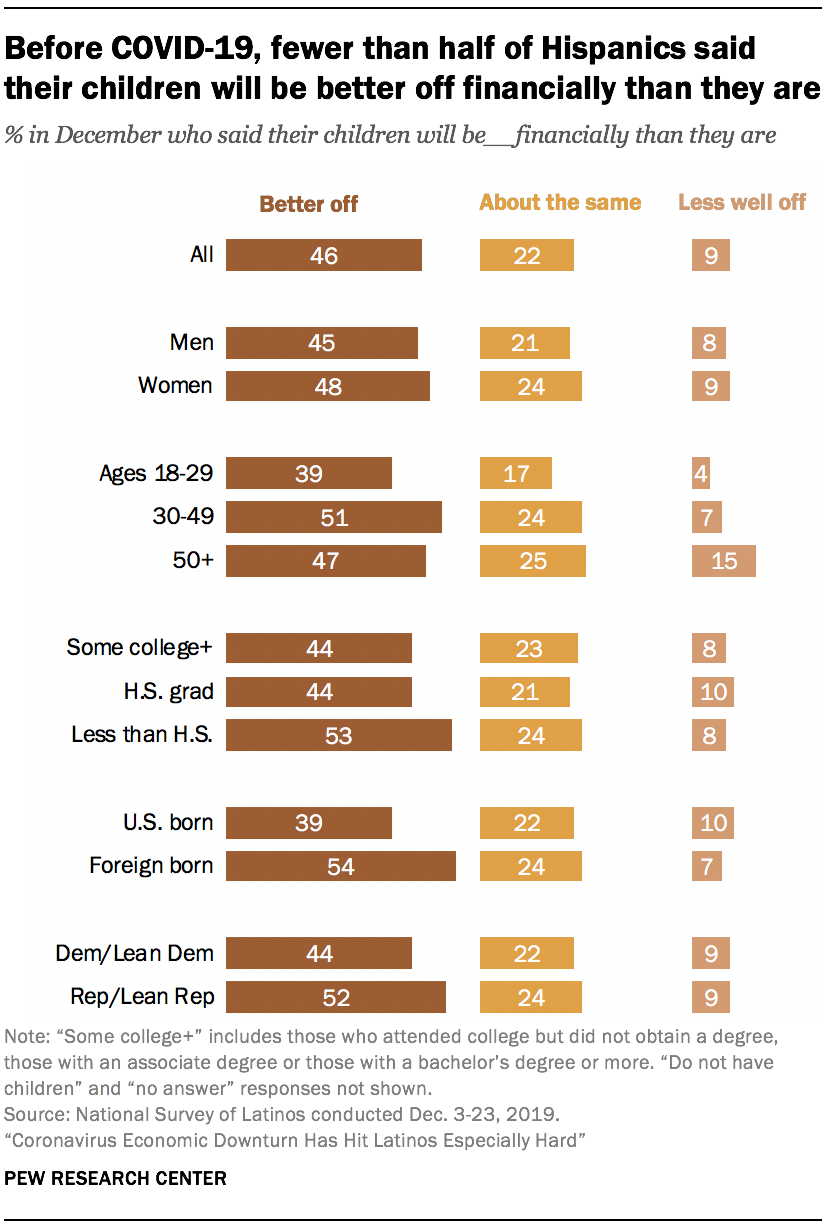 Fewer than half of Hispanics (46%) said their children will one day be better off financially than they are, according to the December survey.

As on many issues, views differed among Hispanics by political party affiliation. Roughly half of Republicans (52%) said their children will be better off financially than they are, compared with 44% of Democrats.

Coronavirus Economic Downturn Has Hit Latinos Especially Hard
Hispanics support broad set of proposals for economic aid due to coronavirusBefore coronavirus, Latinos said immigration and the economy were the most important problems facing the U.S.Before coronavirus, most Latinos viewed their personal finances in a more negative than positive light
Acknowledgments Methodology