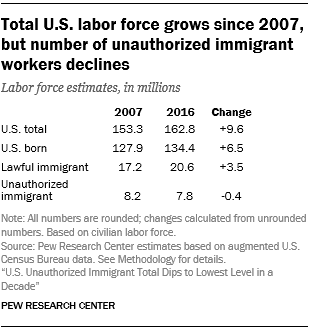 During the same period, the overall U.S. workforce grew, as did the number of U.S.-born workers and lawful immigrant workers. 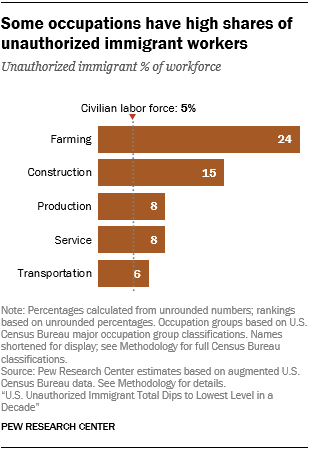 This report includes estimates about the occupations and industries in which unauthorized immigrants work. Occupation is the kind of work that people do on the job, while industry is the kind of business conducted by an employer.

The U.S. Census Bureau collects data on occupation and industry from responses to write-in and check-box questions. The responses are then coded using a standard classification system.

Unauthorized immigrants also hold a disproportionate share of service, transportation and production occupations – that is, a larger share than their overall 5% share of the workforce. (Production jobs include manufacturing, food processing and textile occupations.)

Service jobs employ the largest number of unauthorized immigrants – 2.4 million in 2016. They also are the largest occupation in at least 40 states.

But unauthorized immigrants are underrepresented in some white-collar occupations. They make up 2% or less of the workforce in management, professional and office occupations.

In both the jobs they hold and the industries in which they work, unauthorized immigrants tend to cluster in low-skilled employment, due at least in part to their below-average education levels and lack of legal status to work. Within the most detailed occupational categories, for example, they constitute about 10% or more of about two dozen job types that mainly are in food preparation, construction, and maintenance or cleaning. Unauthorized immigrants, who are one-in-twenty workers overall, account for about one-in-four roofers, drywall installers, carpet installers and painters (see detailed table in Appendix C).

However, all sectors and occupations of the civilian labor force have more U.S.-born workers than unauthorized immigrant workers.

Unauthorized immigrants are overrepresented in some industries 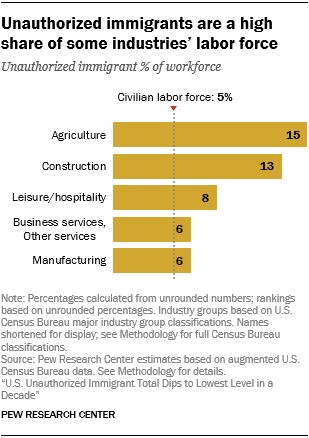 Unauthorized immigrants constitute a larger share of the civilian workforce in some industries than their 5% share of the total workforce. In 2016, they accounted for 15% of workers in the agriculture industry and 13% in construction. Those also were the top industries in the largest number of states. Agriculture ranked first in 19 states, most of them in the West and Midwest, as the industry with the largest share of unauthorized immigrants in its workforce. Construction ranked first in 18 states, about two-thirds of them in the South.

Unauthorized immigrant workers also were overrepresented in the labor force in the leisure and hospitality industry, in some services and in manufacturing.

Next: 5. Numbers fall in U.S. states with the largest unauthorized immigrant populations
← Prev Page
Page1Page2Page3Page4You are reading page5Page6Page7Page8Page9Page10Page11
Next Page →