Hispanic dissatisfaction with the direction of the U.S. has grown markedly in the past year. This pessimism extends across different ages, educational levels and immigrant generations, with Democrats and women reporting some of the highest levels of dissatisfaction in 2018, according to the new Pew Research Center survey of Hispanic adults. Overall, Hispanics are now as dissatisfied as the general public with the nation’s direction, a sharp reversal from previous years. In addition, Hispanics say the economy and immigration are the most important problems facing the nation today, with Donald Trump and racism also cited as pressing issues. 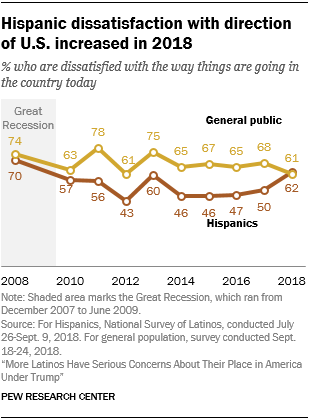 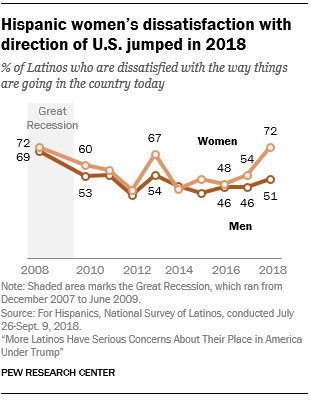 Hispanic views on the state of U.S. differ by party affiliation 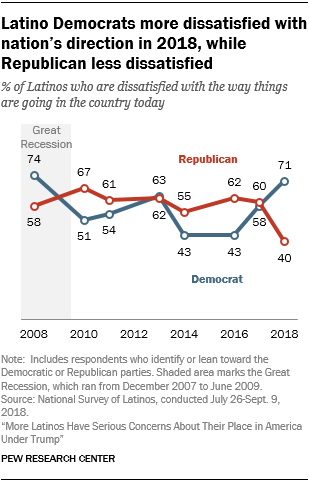 As is the case with the general public, Hispanic views on issues vary by political party affiliation. Hispanic Democrats are now more dissatisfied with the nation’s direction than Hispanic Republicans, a reversal from just two years ago.

In 2018, seven-in-ten Hispanics who identify with or lean toward the Democratic Party (71%) say they are dissatisfied with the way things are going in the country today, up from 60% in 2017 and 43% in 2016. Levels of dissatisfaction for this group have reached their highest level since the Great Recession and its aftermath.

By contrast, less than half of Hispanics who identify with or lean toward the Republican Party (40%) say they are dissatisfied with the way things are going with the country today, down from 60% in 2017.

Hispanics say immigration, economy are the nation’s most pressing problems 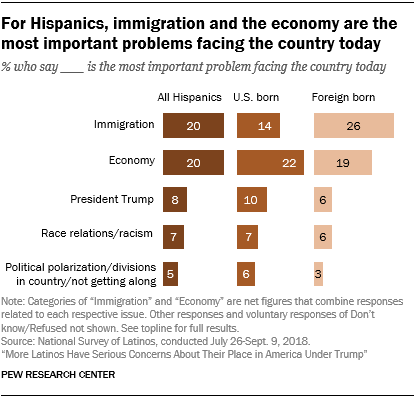 When asked an open-ended question about issues, Hispanics say those related to immigration and the economy are the most important problems facing the country today.

One-in-five Hispanics (20%) say issues related to immigration are the most important problem facing the nation, with family separation and deportation among the issues cited. Another 20% of Hispanics say issues related to the economy are the most important problem, with the country’s wealth gap and unemployment among the issues mentioned. Lower shares say President Trump (8%) and race relations or racism (7%) are the nation’s most pressing problems.

On immigration issues, more Hispanic immigrants (26%) than U.S.-born Hispanics (14%) cite it as the most important problem facing the country. Among Hispanic immigrants, 31% of non-citizens (a group that counts those with a green card as well as those without one) say the same, compared with 18% of naturalized U.S. citizens. Notably, similar shares of Hispanic Democrats (19%) and Hispanic Republicans (22%) say immigration is the most important problem facing the country.

Hispanics broadly agree that the economy is one of the most important problems facing the country today. About a fifth of Hispanics say this across different groups, including gender, political party, immigrant generation and citizenship status among immigrants.

When Hispanic registered voters are asked about the nation’s most pressing problem, they cite the same four issues as Hispanics overall: the economy (19%), immigration (16%), racism and discrimination (10%) and Donald Trump (10%). Similar shares of Hispanic registered voters across different groups, including gender, political party, citizenship status among immigrants, cite immigration as the nation’s most important problem.

Next: 4. Views of immigration policy
← Prev Page
Page1Page2Page3You are reading page4Page5Page6Page7Page8Page9Page10Page11
Next Page →

More Latinos Have Serious Concerns About Their Place in America Under Trump 1. Latinos have become more pessimistic about their place in America 2. Latinos and discrimination
3. Hispanics have become more dissatisfied with direction of U.S.
Hispanics more pessimistic about country’s directionHispanic views on the state of U.S. differ by party affiliationHispanics say immigration, economy are the nation’s most pressing problems
4. Views of immigration policy 5. Views of President Donald Trump 6. Hispanic voters and the 2018 midterm elections Acknowledgments Methodology Appendix A: References Appendix B: Additional table

Want to understand U.S. immigration? Weu2019ve got an email course for you