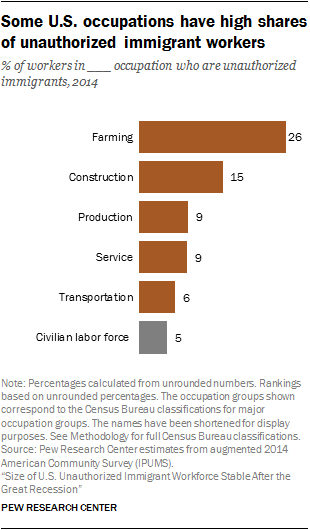 However, unauthorized immigrants made up only 2% each of management, professional and office support workers. In those occupational categories, U.S.-born workers made up at least 85% of the jobholders.

At the state level, farming is overwhelmingly the occupation where unauthorized immigrants make up the highest share of the workforce.4

It is the top occupation by this measure in 32 states. For the nation, unauthorized immigrant workers are overrepresented in farming jobs, where they made up 26% of workers in 2014 compared with the overall workforce, where they represented 5% of U.S. workers. Construction ranks first in nine states. Nationally, unauthorized immigrant workers held 15% of construction jobs in 2014.

Next: Acknowledgments
← Prev Page
Page1Page2You are reading page3Page4Page5Page6Page7Page8Page9
Next Page →