To assess how the electorate will have changed between 2012 and 2016, we constructed an estimate of the November 2016 U.S. citizen population aged 18 years and older beginning with the November 2012 population and demographic components; specifically:

The basic data for these components are from the November CPS for 2008-2015, the American Community Survey (ACS) for 2008-2014 and the Puerto Rican Community Survey (PRCS) for 2008-2014. We did tabulations of CPS data online using the Census Bureau’s DataFerrett tabulation program (http://dataferrett.census.gov/) or microdata downloaded from the Census Bureau’s FTP website (http://thedataweb.rm.census.gov/ftp/cps_ftp.html). For the ACS and PRCS, we did tabulations online from the 1% samples of the Integration Public-Use Microdata Series (IPUMS, www.ipums.org). All computations were done for the Hispanic origin population and for non-Hispanic race groups (single race and multiple race). The initial population of citizens ages 18 and older in November 2012 (I) is a tabulation from the November 2012 CPS.

The initial data for estimating the number of immigrants who become U.S. citizens between November 2012 and November 2016 (III) draw on ACS information on year of naturalization for immigrants who have naturalized. From the 2008-2014 ACS, the number of immigrants who are naturalized in each calendar year was estimated for immigrants who would be 18 and older in 2016 as the average across the available ACS years. Data for partial years (e.g., naturalizations in 2014 from the 2014 ACS) were adjusted to full years using the average correction factor the preceding five years or the total number of years available. Projections for 2015-2016 use average annual naturalizations for 2012-2014. The component of change in the above equation is the sum of estimates for calendar years 2013-2016.

Net movement from Puerto Rico is based on the “residence one year ago” question on the ACS and PRCS. From the 2008-2014 ACS, we tabulated U.S. citizens who lived in Puerto Rico (and Guam and other U.S. territories) by age for race and Hispanic groups. Similarly, from the 2008-2014 PRCS, we tabulated U.S. citizens who lived in the U.S. one year before the survey. Net movement for each survey year is the difference between the ACS data and PRCS data; for the component estimate, we calculated net movement of U.S. citizens for the group who would be 18 or over in 2016. For each calendar year, the estimate of net movement is the average of adjacent survey years; e.g., the estimate for calendar 2013 is the average of the 2013 and 2014 surveys. Net movement for 2015-2016 is estimated as the average of 2011-2014.

The estimation process was also carried out for the change between November 2008 and November 2012 using CPS data for November 2008-2011. No projections were necessary as the CPS, ACS and PRCS are available for all years covered by the estimate.

The adjusted 17-year-old educational levels were then added to the original 2015 18 and older analysis to produce an estimate of educational attainment levels for U.S. citizens ages 18 and older for 2016. This method was similarly applied to whites, blacks and Asians. 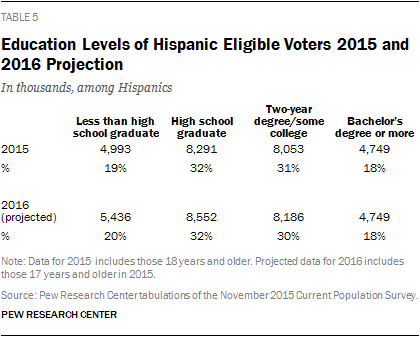 Next: Appendix A: Latino Eligible Voters in Presidential Election Years 2008, 2012 and 2016
← Prev Page
Page1Page2Page3Page4You are reading page5Page6Page7Page8
Next Page →