The decline in the number of Mexican immigrants living in the U.S. also is reflected in a 2015 Pew Research Center survey done in Mexico, in which a decreasing share of Mexicans report connections in the U.S. Today, 35% of adults in Mexico say they have friends or relatives they regularly communicate with or visit in the U.S., down 7 percentage points from 2007, when the Mexican immigrant population in the U.S. had reached its peak. 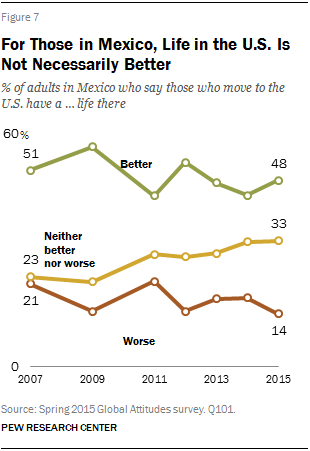 Mexican adults with higher incomes are more likely to report having family or friends in the U.S. with whom they keep in touch compared with those with lower incomes (41% vs. 28%). Similarly, adults in Mexico with higher levels of education are more likely than those with less education to say they have close connections in the U.S. (43% vs. 31%).

Still, the prospect of life in the United States has not lost its appeal. About half of all adults in Mexico think those who have moved to the U.S. lead better lives than those left behind, a similar share as in 2007 (48% in 2015 vs. 51% in 2007). At the same time, though, an increasing share (33%) says life is neither better nor worse north of the border than did so in 2007 (23%). And only 14% of Mexicans believe life in the U.S. is worse than in Mexico for those who migrate. 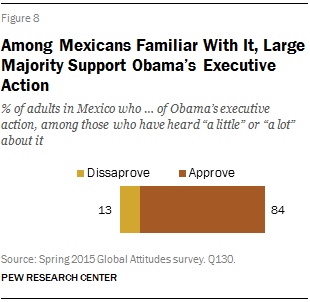 Although smaller percentages of adults in Mexico report having connections in the U.S. in recent years, 60% have heard “a little” or “a lot” about President Obama’s issuing an executive action that expands the number of unauthorized immigrants who are allowed to stay and work in the U.S. Among those who have heard of it, a large majority (84%) approves of this new policy, while only 13% oppose the action.