The unauthorized immigrant estimates throughout this report are produced using a multistage method that subtracts the legal foreign-born population from the total adjusted foreign-born population; the residual then is used as the source of information about unauthorized immigrants. The main source of data for estimates from 2005 on is the Census Bureau’s American Community Survey; estimates for 1995 and 2000 use the bureau’s March Current Population Survey. See Passel and Cohn 2014 for more detail.

Rounding of Estimates. All estimates for immigrant populations, legal and unauthorized, are presented as rounded numbers to avoid the appearance of unwarranted precision in the estimates. The rounding conventions for immigrant estimates, dependent somewhat on data sources, are:

State and national data for the total and U.S.-born populations are rounded to the nearest 10,000. Unrounded numbers are used for significance tests, for plotting charts and for computations of differences and percentages. Where differences are reported, they are computed from unrounded estimates and then rounded separately. Because each figure is rounded separately, the rounded estimates may not add to rounded totals. Similarly, percentages computed from rounded numbers may differ from the percentages shown in this report.

The Census Bureau has three different levels of aggregation each for industry and occupation. At the highest level, there are 12 classifications for “Major Occupation” groups (11 for civilians, plus the Armed Forces). At the next level, there are 23 “Detailed Occupation” groups, but eight of them are identical to the “Major” groups; the three major occupation groups for management, professional and service occupations are subdivided into 15 smaller, detailed groups. Finally, there are a large number of very specific occupation categories–almost 600—which can be grouped into either the “Detailed” or “Major” groups. So, for example, the code for “Aerospace engineers” (1320) is part of the detailed category for “Architecture and engineering occupations” which, in turn, is part of the major category of “Professional and related occupations.”

For industries, the highest level has 14 “Major Industry” groups (13 for civilians and one for the Armed Forces). At the next level, there are 52 “Detailed Industry” groups. Unlike with occupations, only four of the Major groups are identical to “Detailed” groups. Finally, there are 273 very specific industry categories that can be grouped into either the “Detailed” or “Major” groups. So, for example, the industry called “Retail bakeries” (code 1190) is part of the detailed category for “Food manufacturing” which, in turn, is part of the major category of “Manufacturing.”

For ease of presentation, the full titles of many industry and occupation categories have been condensed from the Census Bureau’s terminology. Data on what are called “major” industry categories are shown in Tables A3, A4 and B3, as well as in some figures in the text. Table B3 includes the full names of the industry categories, but in Tables A3 and A4 and the text, they are shortened as follows: 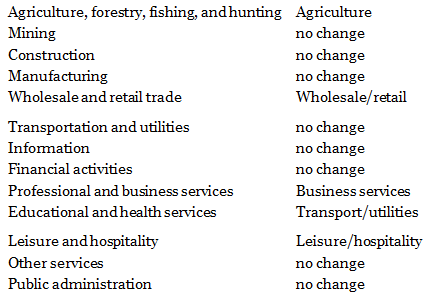 Data on “major” occupation categories are shown in Tables A1, A2 and B1, as well as in some figures in the text. Table B1 includes the full names of the industry categories, but in Tables A1 and A2 and the text, they are shortened as follows:

The specific, detailed categories for industries and occupations used in Tables B2 and B4 are not condensed. References in the text, text charts and tables can be cross-referenced to the lists above.

More information on the Census Bureau’s industry and occupation categories can be found here: http://www.census.gov/people/io/.