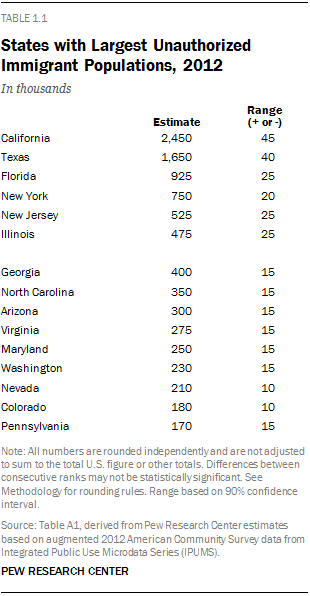 These state-level changes are masked by the stability at the national level, according to the Pew Research estimates. The overall number of unauthorized immigrants living in the U.S. in 2012—standing at 11.2 million—was unchanged from 2009, the final year of the Great Recession. The population had fallen since its peak of 12.2 million in 2007, when the recession began.

States that Grew or Declined

The seven states where unauthorized immigrant populations grew from 2009 to 2012 were Florida, Idaho, Maryland, Nebraska, New Jersey, Pennsylvania and Virginia.

Long-Term Trend Comes to a Halt 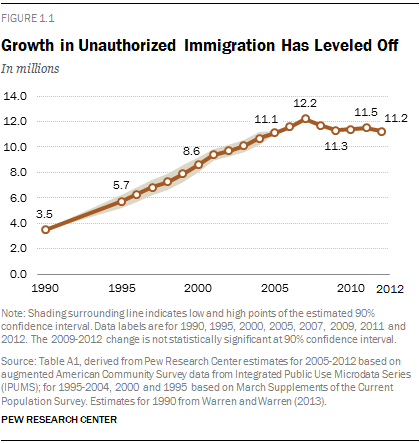 The population of unauthorized immigrants increased in every state, but growth was slower in the six states with the largest numbers of such immigrants than in the rest of the nation as a whole.2

These growth differentials led to a marked shift in the distribution of unauthorized immigrants across the country. The share in California dropped to 23% in 2007 from 42% in 1990. The share in the other large states was unchanged at 38%, but the share in the rest of the country essentially doubled, to 39% in 2007 from 20% in 1990. With the overall decreases in the unauthorized population since 2007, these shifts came to a halt. 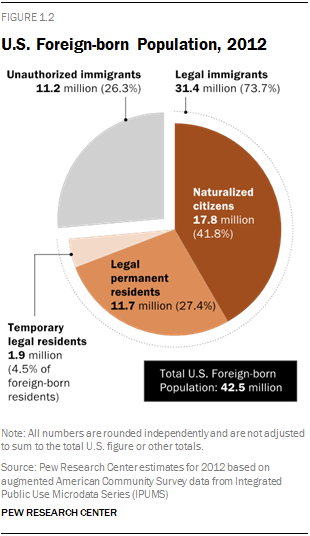 Among all immigrants, the share who were unauthorized in 2012 ranged widely by state, from 6% (Maine) to 45% (Arkansas). The states with the largest shares were in the South and Mountain West, some of which are relatively new destinations for unauthorized immigrants.

One-in-Twenty People in the Labor Force 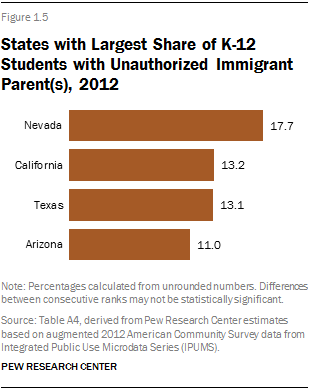 The number of unauthorized immigrant adults with U.S.-born children may be higher than what is shown here because these numbers do not include those who live separately from their children.

Young unauthorized immigrants have declined in number in part because some have turned 18 and become adults with unauthorized status.

Obamau2019s expected immigration action: How many would be affected?