As has been the case for several years, Hispanics rank several issues as more important than immigration, though immigration remains a key issue for the majority of Hispanic registered voters. Hispanics are also more likely to say the Democratic Party could do a better job than the Republican Party on immigration, the economy and foreign policy.

The new survey asked Latinos to rate the importance to them of five issues that might be discussed in this year’s midterm elections: education, health care, immigration, jobs and the economy, and conflicts in the Middle East. 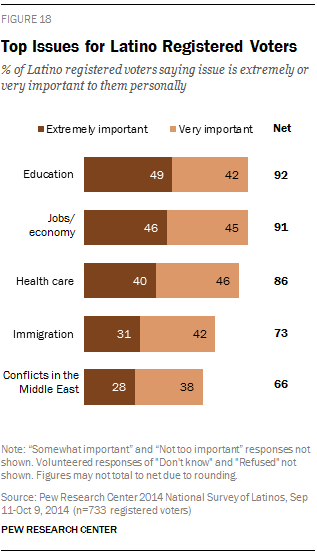 Among Latino registered voters, two issues rate highest in importance. Fully 92% say education is an extremely (49%) or very (42%) important issue to them personally, and 91% say jobs and the economy is an extremely (46%) or very (45%) important issue. Following these two issues is health care, which 86% of Latino voters rate as extremely important (40%) or very important (46%). These three issues have consistently rated as the top three among Latino voters in Pew Research Center surveys (Krogstad, 2014), and the ranking is similar to that seen prior to the 2012 presidential election (Lopez and Gonzalez-Barrera, 2012).

This relative ranking of issues among Latino registered voters is similar to the ranking for all Latinos. Fully 94% of Latino adults say education is an extremely (45%) or very important (49%) issue to them personally. This is followed by jobs and the economy (91%) and health care (87%). On the issue of immigration, 75% say it is extremely important (29%) or very important (45%). That places immigration behind education, jobs and the economy, and health care. The issue of conflicts in the Middle East is rated as important by 62% of Latino adults. 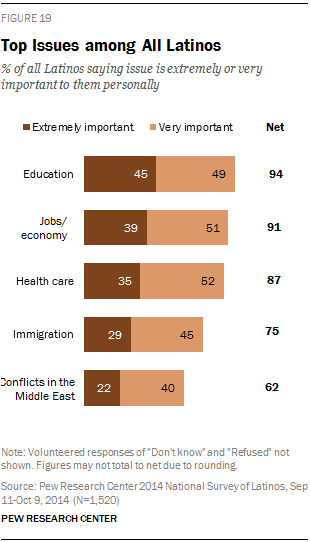 Among all Latino adults, the five issues rank similarly among the foreign born and the U.S. born, but on four out of five issues, immigrants are more likely than the U.S. born to rate an issue as extremely or very important. For example, 97% of Latino immigrants say the issue of education is extremely or very important to them, compared with 91% among those born in the U.S. The difference is wider on the issue of health care, with 91% of Latino immigrants saying it is a top issue, compared with 81% of those born in the U.S.5

Views on the importance of immigration as an issue vary across demographic subgroups among all Latino adults. At least eight-in-ten say immigration is extremely or very important to them personally among the foreign born (84%), the Spanish dominant (83%), people lacking a high school diploma (82%), those 65 and older (81%) and women (80%). By contrast, the shares stating that immigration is an extremely or very important issue are lower among second-generation Hispanics (67%), high school graduates (67%), English dominant Hispanics (62%) and third or higher generation Hispanics (61%).

Views also do not vary by Mexican origin group. Both among Hispanics who are and are not of Mexican origin, three-in-four (75%) say immigration is an extremely or very important issue to them personally. 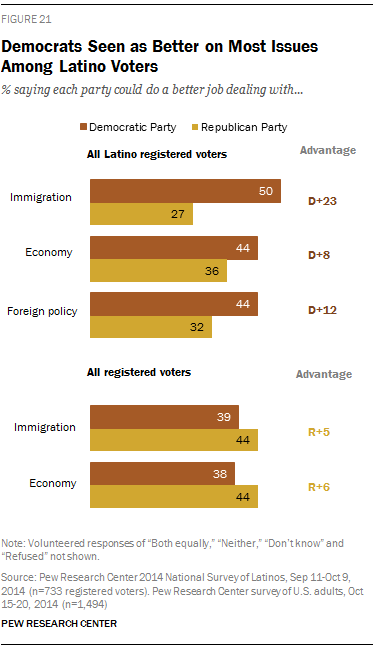 The new survey asked Latinos which of the political parties could do a better job on three issues: the economy, immigration and foreign policy. Overall, the Democratic Party is seen more positively among Latino voters than the Republican Party on each of these issues.

On dealing with the economy, 44% of Hispanic voters say the Democratic Party could do a better job while 36% say the same about the Republican Party, a Democratic advantage of eight percentage points. However, among all U.S. registered voters views are reversed. Some 44% say Republicans could do a better job in dealing with the economy while 38% say that about the Democrats—a Republican advantage of six percentage points.

The survey also finds that 44% of Hispanic voters say the Democratic Party could do a better job making wise decisions about foreign policy while 32% say the same about the Republican Party—a 12 percentage point Democratic advantage.

Next: Chapter 5: Hispanics and their Views of Immigration Reform
← Prev Page
Page1Page2Page3Page4You are reading page5Page6Page7Page8Page9
Next Page →