The population of Puerto Rico, which had been growing since at least the 1700s, has drifted downward in recent years. The decrease from 3.8 million in 2000 to 3.6 million in 2013 represents the first sustained decline since U.S. census-taking began in the early 20th century. The Census Bureau projects that the island’s population will be about 3 million in 2050 following decades of slow decline.10

The island’s economic crisis may be driving thousands of Puerto Ricans to seek opportunities on the mainland, or to return there. In addition, the potential for population growth on the island is weakened by persistently low fertility rates (Mora, Davila and Rodriguez, 2015). 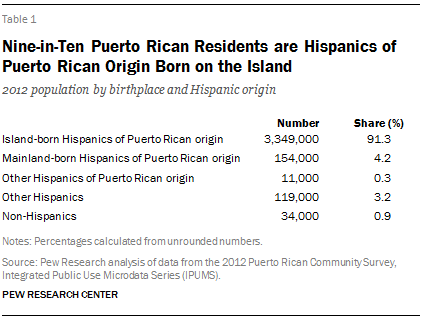 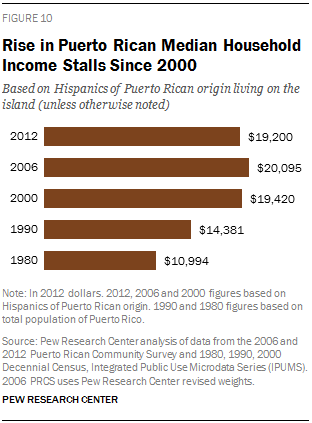 The lower economic standing of Puerto Ricans on the island, compared with those on the mainland, reflects both the longstanding weakness of the island’s economy and a fiscal crisis that erupted in 2006. 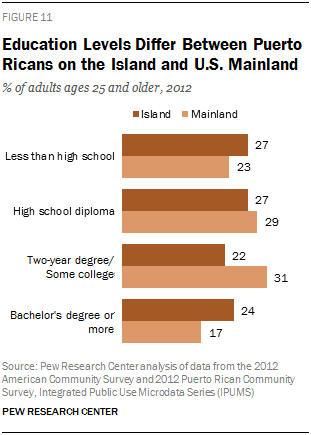 A 2012 Federal Reserve Bank of New York report on Puerto Rico (Federal Reserve Bank of New York, 2012) said the island economy has been stagnant since the 1970s, with a stubbornly high unemployment rate that has been roughly double that on the U.S. mainland for decades. The island’s June unemployment rate, 13.1%, compares with 6.1% for the U.S. mainland.13

The report also noted that transfer payments, especially food stamps and disability payments, account for a large share of personal income on the island—roughly 40%, more than double the share on the U.S. mainland among all U.S. residents. The availability of these benefits, as well as a large underground economy, may discourage people from joining the workforce, the report said. Other researchers have cited the island’s perennially high poverty rate (Mora, Davila and Rodriguez, 2015).

The island-specific problems included the end in 2006 to longstanding Puerto Rican government corporate tax breaks, which resulted in the loss of thousands of manufacturing jobs. Responding to a budget deficit, island officials imposed a sales tax on island residents for the first time in 2006, which had a disproportionate impact on low-to-middle-income residents. The economic problems led to layoffs of government workers, especially the less educated. Government employment on the island fell by a reported 14.3% between 2006 and 2011. (Mora, Davila and Rodriguez, 2014 and 2015).

In 2013, the island’s preliminary birth rate was 10.8 per thousand people, compared with 12.5 for the mainland U.S. The island’s birth rate was 13.4 in 2004, and it decreased in each year but one since then, according to statistics included in a 2013 report to the governor by the Puerto Rico Planning Board. The number of births on the island, 39,000 in 2013 preliminary data, has declined by a quarter since 2004.