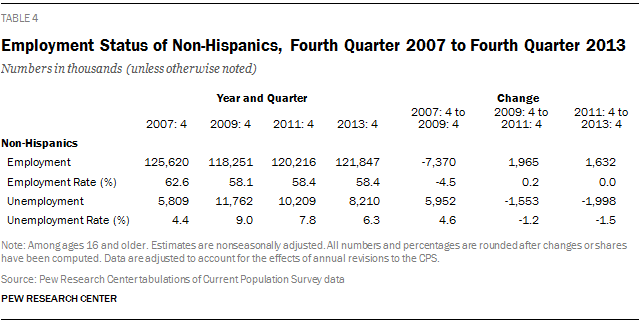 The slow growth in jobs for non-Hispanics mirrors the slow growth in their working-age population. From 2009 to 2013, non-Hispanic employment increased by 3% and the working-age population increased by 2.5%. Thus, the employment rate for non-Hispanics is essentially unchanged, moving from 58.1% in 2009 to 58.4% in 2013. The unemployment rate, however, has fallen from 9% to 6.3% in the past four years. But both rates are yet to return to the levels that prevailed before the onset of the recession.

Generally, the gap in the rates at which Hispanics and non-Hispanics are gaining jobs is the result of long-run demographic trends. The Hispanic share of the U.S. working-age population increased from 13.6% in the fourth quarter of 2007 to 15.4% in the fourth quarter of 2013. In line with that, the Hispanic share of employment over that period increased from 13.9% to 15.7%.13

Non-Hispanic Immigrants Continue to Expand their Role in the U.S. Labor Market

The more rapid increase in the supply of immigrant workers among non-Hispanics translated into more rapid employment growth. Employment among non-Hispanic immigrants rose from 10.9 million in the fourth quarter of 2009 to 12.5 million in the fourth quarter of 2013, an increase of 1.6 million. That was more than enough to make up for the loss of 555,000 jobs in the recession. 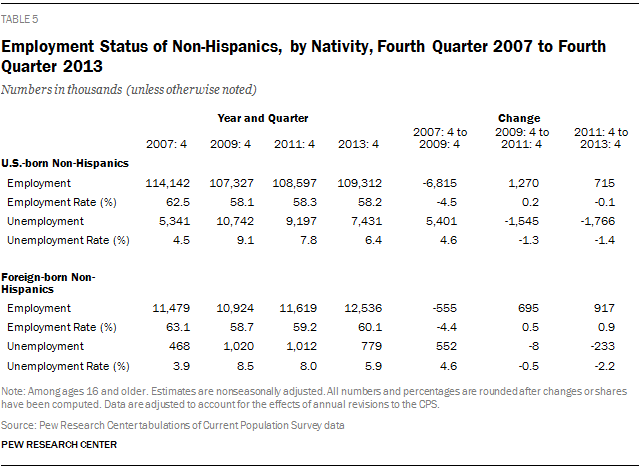 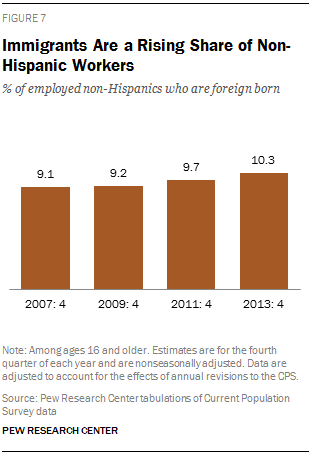 A Slow Recovery for Whites, Blacks and Asians

Labor market outcomes for white, black and Asian workers have generally improved only modestly during the economic recovery. Employment growth for each group has hewn to the rate at which the working-age population for each group is growing. All workers—whites, blacks and Asians—are still looking to recover fully from the setbacks delivered by the recession.

The number of Asians with jobs in the fourth quarter of 2013—8.5 million—exceeded the 7.4 million employed at the start of the recession in the fourth quarter of 2007. But, like Hispanics, Asians are a rapidly growing segment of the U.S. population, and the share of the Asian workforce with a job is still depressed. More specifically, the employment rate for Asians fell from 64.1% in 2007 to 59.7% in 2009 and leveled off thereafter, standing at 60.9% in 2013. 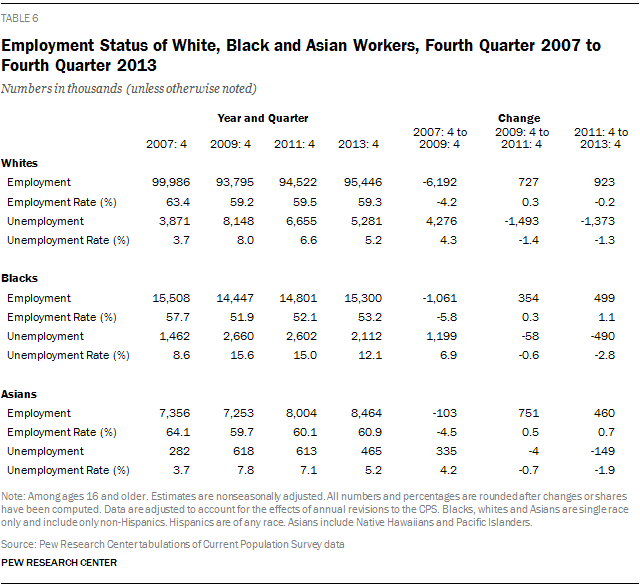 Employment growth for whites and blacks in the recovery appears to lag behind the growth observed for Hispanics and Asians. However, the white and black populations are increasing more slowly, and the shares that are employed have trended like they did for Hispanics and Asians, falling sharply in the recession and then recovering modestly. From 2007 to 2013, through the recession and the recovery, the employment rate for whites fell from 63.4% to 59.3%, and for blacks it fell from 57.7% to 53.2%, a loss of about four percentage points for each. The decrease in the employment rate was similar for Hispanics and Asians, four and three percentage points respectively.

Next: Chapter 4: The Jobs Recovery for All Foreign-born and All U.S.-born Workers
← Prev Page
Page1Page2Page3You are reading page4Page5Page6Page7Page8Page9Page10
Next Page →