Overall, remittances to Spanish-speaking Latin America countries have more than doubled since 2000 in real dollars. Those Latin American nations received $22.9 billion in remittances in 2000, a figure that rose to an estimated $53.8 billion in 2013, according to World Bank data. 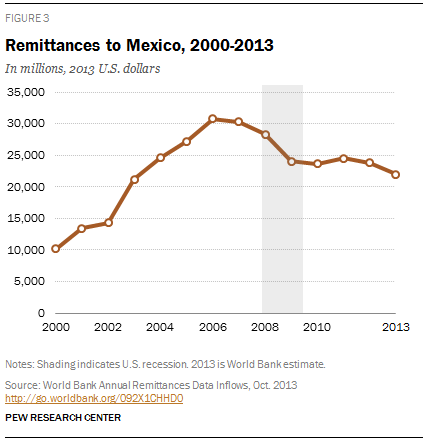 The reduced remittances to Mexico were reflected in the findings of a 2008 survey by the Pew Research Center’s Hispanic Trends Project. Among Hispanic immigrants who had sent remittances in the previous two years, 71% said they sent less in the past year than the year before (Lopez, Livingston and Kochhar, 2009). In addition, immigration from Mexico has declined to the point that the number of Mexicans arriving in the U.S. could be smaller than the number who are leaving (Passel, Cohn and Gonzalez-Barrera, 2012).

Data for the remaining nations (Chile, Panama, Uruguay and Venezuela), as well as for Brazil, and charts for each nation, can be found in Appendix A.

Countries Where Remittances Fell, but Recovered 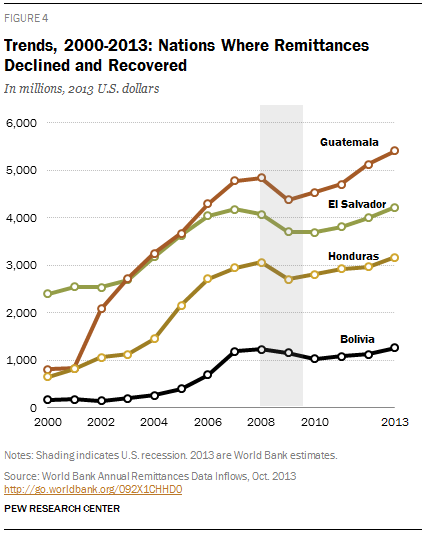 Remittances to Bolivia have risen steeply since 2000—the estimated total in 2013 ($1.3 billion) is more than seven times higher than in 2000 ($172 million). The growth (mainly before 2007) was sharper than for Latin America as a whole, and Bolivian remittances also differed from the pattern for Latin America overall by recovering from their decline during the Great Recession. Remittances to Bolivia generally rose to a peak of $1.2 billion in 2008, and then declined for two years before rising again.

Guatemala also receives most of its remittances—89% in 2012—from the U.S. Guatemalan remittances overall grew from $810 million in 2000 to $4.8 billion in 2008, about a sixfold increase. After declining in 2009, remittances to Guatemala have risen again since then, to total an estimated $5.4 billion in 2013, higher than the previous peak.

Honduras, which received 87% of its remittances from the U.S. in 2012, also has recovered from a decline in remittances during the Great Recession. Honduras received $657 million in remittances in 2000, which rose to a peak of $3.1 billion in 2008. Remittances declined for a year before rising again; in 2013, they reached an estimated $3.2 billion.

Countries Where Remittances Continue to Rise 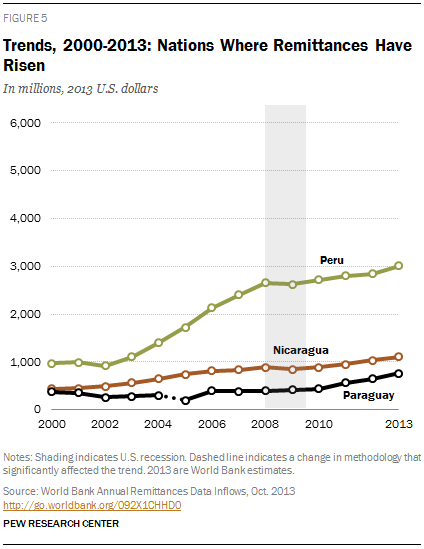 Remittances to Nicaragua have risen steadily since 2000, with only a slight dip during the Great Recession. In 2000, $435 million in remittances were sent to Nicaragua, rising to $891 million in 2008. After a relatively small decline in 2009 (to $840 million), remittances began rising again. In 2013, they totaled an estimated $1.1 billion.

Countries Where Remittances Fell and Did Not Recover 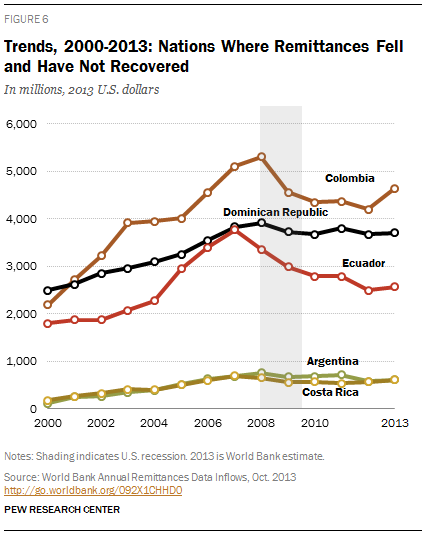 Over the 2000-2013 period, remittances to Argentina peaked in 2008, at $758 million, after rising each year before that, according to World Bank data. Since then, totals have been up and down. In 2013, estimated remittances of $613 million were about a fifth lower than at their recent peak but more than five times what they had been in 2000 ($117 million).

Remittances to Costa Rica, about two-thirds of which come from the U.S., rose sharply from 2000 ($185 million) to 2007 ($697 million). Remittance totals fell or leveled off after that until resuming their upward climb in 2012. In 2013, Bolivia received an estimated $610 million in remittances.

However, the change varied greatly among individual nations. U.S. remittances to Mexico—the largest destination country—declined slightly (3%) in real terms, from $23.6 billion in 2005 to $22.8 billion in 2012. Remittances to Colombia fell 18% in real dollars from 2005 to 2012.

As a result of these differing trajectories, there were changes in rank among the top 10 recipients of U.S. remittances. Honduras received more remittances in 2012 than Colombia, the reverse of their positions in 2005. Similarly, Peru received somewhat more than Ecuador in 2012 remittances, a reversal from 2005.

Remittances and Other Economic Indicators

Remittances are an important contributor to the economies of some Latin American nations. In 2012, according to World Bank data, remittances accounted for about 10% or more of GDP in four nations: El Salvador (16.5%), Honduras (15.7%), Guatemala (10%) and Nicaragua (9.7%).

However, for most Latin American nations, remittances make up a far smaller share of GDP. In 2012, they amounted to less than 1% of GDP in Argentina, Chile, Uruguay and Venezuela. 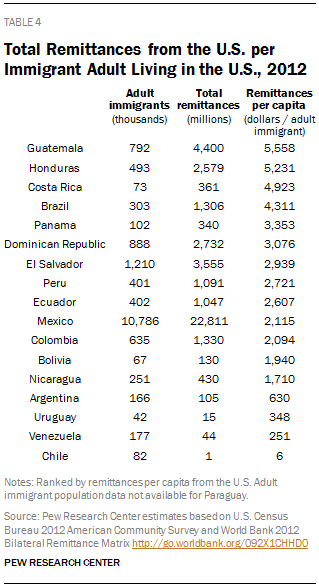 Next: 3. Sources of Remittances to Latin America
← Prev Page
Page1You are reading page2Page3Page4Page5
Next Page →