When asked in an open-ended question who is the nation’s most important Hispanic leader in the country today, most Hispanics say either they don’t know (62%) or no one (9%).3

These findings are largely unchanged from 2010, when in response to the same open-ended question about who is the nation’s most important Latino leader, 64% of Latino adults said “don’t know” and an additional 10% said “no one” (Taylor and Lopez, 2010).

The most named individuals in the recent survey are U.S. Supreme Court Justice Sonia Sotomayor and U.S. Sen. Marco Rubio. Each was named by 5% of survey respondents.

In some cases, named leaders are tied to Hispanic origin groups. For example, 25% of Cubans named Rubio as the most important Hispanic leader in the country today. Sen. Rubio is of Cuban ancestry and represents Florida, where 70% of U.S. Cubans reside. Among Puerto Ricans, the most named leader is Justice Sotomayor at 11%—she is of Puerto Rican ancestry and is from the Bronx (25% of Puerto Ricans reside in the New York-northeastern New Jersey metropolitan area). Villaraigosa, the former Los Angeles mayor, is tied with Sotomayor as the most named leader among Mexican-origin Hispanics. Villaraigosa is of Mexican origin, and 36% of U.S. Mexicans reside in California.

The naming of a leader is not always tied to Hispanic origin, though. Among Salvadorans, the most named is Gutierrez, who is of Puerto Rican origin, at 7%. The Illinois congressman has been working for comprehensive immigration reform for many years, an issue of concern to many Salvadorans. Among Dominicans, Sotomayor is the most named Hispanic leader, followed by Sen. Robert Menendez (D-N.J.). Neither is of Dominican origin, but 62% of U.S. Dominicans reside in New York or New Jersey.

Across other Latino demographic subgroups, results are similar. For example, among immigrant Latinos, 60% say they don’t know who the nation’s most important Latino national leader is; among native-born Latinos, 64% say the same.

Is a National Latino Leader Needed? 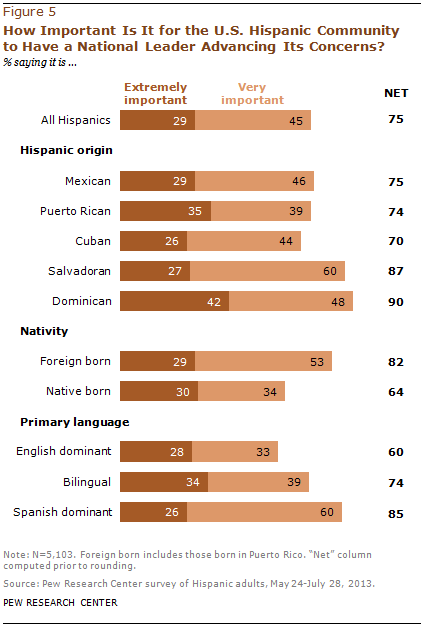 While most Hispanics are unable to name a national leader, Hispanics overwhelmingly see the need for a national Hispanic leader advancing the concerns of the U.S. Hispanic community. Overall, three-fourths say a leader is needed.

This view is held by all major demographic subgroups of Hispanics. For example, among Dominicans, 90% say it is “extremely” or “very” important for the Hispanic community to have such a leader. Among Salvadorans, 87% say the same, as do 75% of Mexicans, 74% of Puerto Ricans and 70% of Cubans.

Views on the need of a national leader vary some by nativity, but majorities of both immigrant Latinos and native-born Latinos say one is needed. Among immigrant Latinos, 82% say it is extremely important (29%) or very important (53%) for the U.S. Latino community to have a national leader advancing its concerns. Among native-born Latinos, 64% say the same.